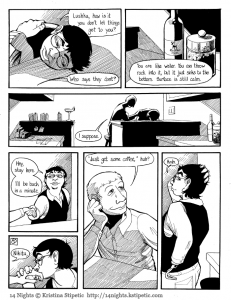 This romance comic explores the relationship between Lucian, who doesn’t want to have sex, and Nikita, who does.

One of the main characters, Lucian, is variously described as not wanting to have sex and / or being afraid of sex. While it’s very possible to read this experience as placing him on the spectrum of asexuality, he never self-identifies as such. The series does not condemn him for these sentiments.

Some mildly homophobic perspectives are expressed by characters, but dealing with homophobia is not a focus of the series.

Per the series’ website, a print edition in Italian is forthcoming.

“Today we look at Kristina Stipetic’s bittersweet romance comic, 14 Nights, which tells the story of a misanthropic man with one arm who falls in love with a sweet guy who, for yet unrevealed reasons (perhaps for unknown reasons even!), refuses to have sex ever. Stipetic uses a powerful, natural approach to telling this story (in other words, there is sex and profanity in this comic – so be forewarned before you read the preview pages!).

The lead in the book is Nikita, a chubby gay guy who lives with his younger sister and works at Public Health Services since it is the closest thing to the field where he WANTS to work (medical research). Nikita is a surly fellow who also happens to only have one hand. After an awkward meeting, he is sent along with a new worker, Lucian, to give a talk to a local high school (about the wonders of antibiotics). After Nikita very loudly mocks the students’ ignorance (to the shock of the school), Lucian and Nikita have a moment afterwards. What follows is a wonderfully handled courtship. It is adorable seeing the hardened defenses of Nikita against the world be slowly broken down by Lucian.” (Source: CBR)

“14 Nights is about the relationship between two men.  Nikita is an abrasive overweight Russian immigrant with a claw for a hand.  Lucian is a quiet data analyst with an affinity for plants.  Lucian doesn’t like sex, he just never has.  This puts a strain on their otherwise adorable relationship, and they try various sex acts to see if it will ever work.  The story is interspersed with symbolic dream sequences, and it’s all rendered in beautiful black and white.” (Source: The Asexual Agenda)