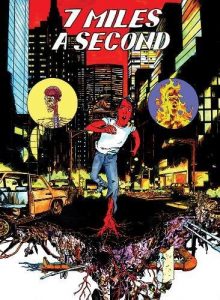 7 Miles a Second is the story of legendary artist David Wojnarowicz, written during the last years before his AIDS-related death in 1992. Artists James Romberger and Marguerite Van Cook unsentimentally depict Wojnarowicz’s childhood of hustling on the streets of Manhattan, through his adulthood living with AIDS, and his anger at the indifference of government and health agencies. A primal scream of a graphic novel, 7 Miles a Second blends the stark reality of Lower East Side street life with a psychedelic delirium that artfully conveys Wojnarowicz’s sense of rage, urgency, mortality and a refusal to be silent.

Originally published in 1996 by Vertigo, this series was reprinted in 2013 by Fantagraphics as an oversized hardcover.

Starred Review: “Originally published in 1996, Wojnarowicz’s impressionistic memoir is the story of his hustling on the streets of New York in the early 1970s and then, 20 years later, being stricken with AIDS in the face of a society reacting with a mixture of horror and indifference. The author’s prose is poetic, arriving with a light touch while delivering a heavy, dark, and understandably angry message. Part of what makes the book unusual is that it does not go out of its way to be uplifting. It is, for once, not about silver linings. It’s about having lived a very hard life, paying a very heavy price for it, and then being hated and reviled for it. Wojnarowicz’s brutal hopelessness has a jarring clarity; there’s no denying that his sometimes hallucinatory depiction of an uncomfortable reality is all the more convincing for his refusal to pull punches. Wojnarowicz was a successful artist, but a life bookended by poverty and AIDS in a nation often indifferent to both is hardly a recipe for happiness. Romberger and Van Cook’s art is hyperactive, with splattery color that suggests the out-of-body acid-trip world of contradictory values and constantly shifting danger that Wojnarowicz lived in.” (Source: Publishers Weekly)

“7 Miles a Second is in some ways more firmly fixed in the visual art canon than are Maus or Jimmy Corrigan or Fun Home. The comic—now being reissued by Fantagraphics—was written by legendary art star David Wojnarowicz, with illustrations by his friends James Romberger and Marguerite Van Cook. The book was published by DC Comics’ Vertigo imprint in 1996, four years after Wojnarowicz’s death from AIDS. It’s a little bizarre to think that a comic about gay hustling and AIDS was put out by a mainstream superhero publisher in the mid-1990s, even on its “mature readers” imprint. And yet, as that cover suggests, the disjunction is also oddly right. 7 Miles a Second is in part a memoir of Wojnarowicz’s experiences as a street hustler, in part a series of surreal set pieces, in part a rant against Reagan-era homophobia and indifference to the AIDS epidemic. It is exploitive and hyperbolic. The lowbrow trashiness of comics is, as it turns out, a perfect fit for the highbrow trashiness of the ‘80s New York arts scene the comic depicts.” (Source: Slate) 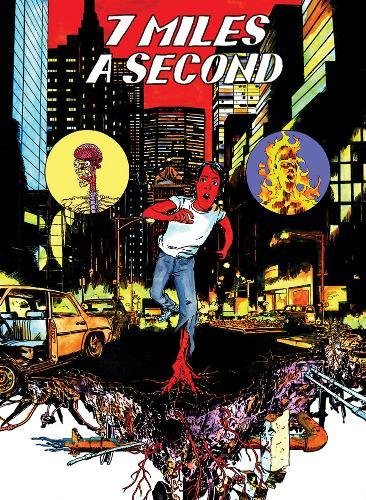 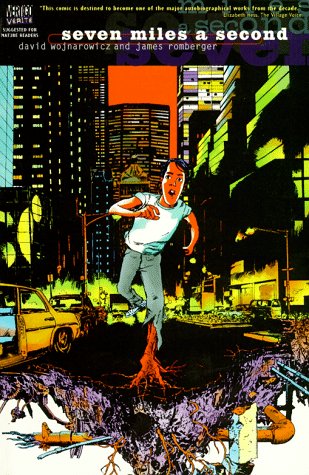