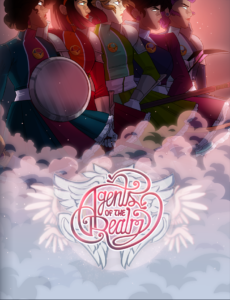 Agents of the Realm is a College years coming of age story, taking influence from a number of timeless Magical Girl themed stories.

Shortly after starting their first year at Silvermount University, five young women discover they’ve each been chosen to protect our world and its newly discovered sister dimension. Volume 1 begins at the start of their first year of college as they learn about this new responsibility and try to find out exactly what’s going on.

Join Norah, Adele, Kendall, Paige, and Jordan as they navigate the complexities of college and discover that they have more strength than they’ve ever imagined.

From: Agents of the Realm

This series as originally uploaded to the web featured domestic abuse, eating disorder, and self-harm, but as the creator explains, “these themes have been removed and instead redirected towards themes that are far more healing and focused on positive growth and encouragement.”

“A magical girl ongoing series inspired by manga like Sailor Moon and Magic Knight Rayearth, Agents Of The Realm features a lot of familiar fantasy elements, but it ties them to a story rooted in personal experiences that aren’t as prevalent in the genre: those of young adult women of color. The main cast of five agents is predominantly black, with one Latina and one white woman, and they cover a variety of sexual orientations that are each depicted casually in the script. Queer is totally normal in Louis’ narrative, and she never has any of the characters explicitly state their sexual orientation because it’s not a distinction that needs to be made. Characters simply show their attraction to others, and while some of the Agents focus solely on other women, some of them have also expressed a romantic interest in men.” (Source: The AV Club)

“Created in 2014 by Mildred Louis, Agents of the Realm takes the Magical Girl genre and turns it on its head.   Right from the start, Louis disregards the usual tropes, with Norah not being too happy with the forced job title.  In fact, Norah is the antithesis of an MG—cynical, sarcastic, and more concerned with catching up on sleep than fighting monsters.  But as the story progresses, she begins to accept her role as a leader.  Louis keeps the cast varied with opposing and complementary personalities for the other Agents.  Adele, a Brazilian, is challenged with going to school in a different country, but constantly looks on the positive side of things.  Kendall can seem flighty at first but is superb at getting close to people.  Paige, though focused to the point of tunnel vision at times, is determined to reach all goals.  Jordan is reliable, but can sometimes run into divided loyalties when trying to please everyone.  While all five have admirable qualities for warriors, they are still young collegians who need to learn how to interact with friends and as a team.

Louis’ artwork uses fine lines and details, going for realism despite the fantasy overtones. Each character has defined individual features; Louis even goes so far to create new clothes for each day, rather than go with the same costume every day. The coloring is normal, even in regards to fantasy, so no purple skin or blue hair, unless the character uses hair dye. Louis uses shadows very well, such as the natural shading when hair falls across the face or when wearing a hat, adding depth to facial expressions.” (Source: Capeless Crusader)

“A new take on the magical girl genre, Agents of the Realm presents women of different races, beliefs, and sexual orientations who must learn how to work as a team to fight evil while trying to navigate through their collegiate careers. A slightly more mature read than most mainstream magical girl series, Agents of the Realm will appeal to young adult and adult readers alike. Fans of Sailor Moon and Puella Magi Madoka Magica will love this series.” (Source: Virginia Library Association)

“Yes, it’s corny. No, the dialogue doesn’t always make perfect sense. Yes, the plot is a bit silly. I couldn’t care less. What’s important to me is that it’s an action story with a heart, starring all girls, almost all of whom are people of color, with a large portion of the screentime dedicated to developing complex and heartfelt relationships between those girls. And that it’s fun. Did I mention that it’s fun? I think I might have. We need more stories like this one, and I can’t wait to see how it unfolds.” (Source: Yes Homo)

Autostraddle: “Drawn to Comics: Talking To Mildred Louis About How Agents of the Realm is a Love Letter”

The MNT: “Mildred Teases the Future of ‘Agents of the Realm’”