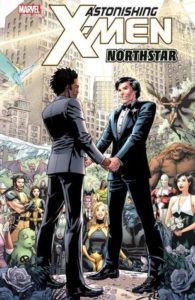 The Marauders return with a vengeance when Chimera leads the deadly squad against the X-Men! Karma discovers an unknown but incredibly powerful telepath is controlling their assailants, and Wolverine leads his team on an investigation that puts their minds and hearts to the ultimate test. When a psychic ambush pits the X-Men against their teammate Northstar, he learns the true meaning of devotion — as his boyfriend Kyle holds a gun to his head! Northstar’s decision in the face of death will lead him to the wedding that the world’s been waiting for — if he can survive a harrowing battle against his teammates and the love of his life!

The first nine volumes of this series feature a different creative team and do not prominently feature queer characters or themes.

“Marjorie Liu’s run on Astonishing X-Men has had strong character work, but the plot has felt strained under the complex mystery. Intertwined with an investigative plot is Northstar’s troubled relationship with his longterm boyfriend Kyle. Out on a dangerous mission, Northstar asks Gambit and Iceman for advice. Asking the ladies man and the forever single guy for relationship advice? Now that’s dangerous.

And then there’s Northstar’s big idea to fix his relationship with Kyle. Yup, he gets down on one knee and asks Kyle to marry him, much to the pleasure of the ladies on The View. Any fan of the mutant soap opera known as the X-Men will know ahead of time that things do not go according to plan. It is precisely that type of burning drama — the kind that makes you shout “No! That’s not fair!” at your comic — that has made the X-Men so compelling to read over the years, and so Liu’s superb character-centric writing feels right at home.

For all of the attention the proposal has garnered, it is not as glamorized as one might expect. Sure, the actual proposal gets a full page, but aside from that it plays as just another beat in the story. The issue was not structured around it so that the proposal fell on the last page with a giant “To be continued!” to tease the reader. The characters naturally came to the moment and react to it the way any person might. By making the proposal a heartfelt part of the story instead of a gimmick, Liu has only reinforced its authenticity.” (Source: IGN)

“But perhaps the greatest achievement here is Liu’s superb mastery at involving readers at a deep emotional level with the wedding itself. This isn’t an off-the-cuff, spur-of-the-moment event issue, a crass commercial tie-in with LGBT month, after which the X-Men can return to life as “normal”. No, this is the normal. From the moment she took the reigns as series regular writer with issue #48, Liu has made the focus of her Astonishing X-Men the private lives of the X-Men themselves. Northstar’s wedding to Kyle is not an interruption to the evolving storylines, it is the very substance of the book. And Northstar’s and as Gambit’s love lives, as well the private lives of the other team members is meaningfully leveraged as context for the severe damage done by the psychic attacks of the Marauders and of teammate Karma who has now ostensibly gone rogue.

That act of finding the inherent drama is the high art of Marjorie Liu, and the signature of a true master storyteller. It has been decades since X-Men books have evidenced this profound connection with their past of producing socially relevant storylines. And decades more since this was effected with such skill.” (Source: PopMatters)

Nerdist: “Marjorie Liu talks about her latest book, X-MEN, and harassment in comics“ 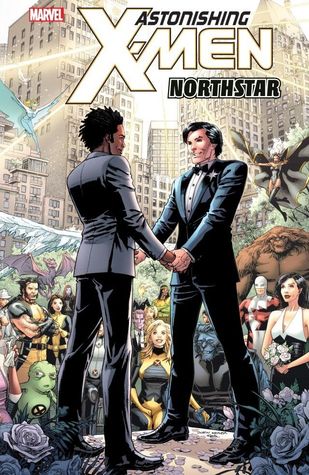 Collects Astonishing X-Men  #48–51 & material from Nation X #2, including the wedding of Northstar. 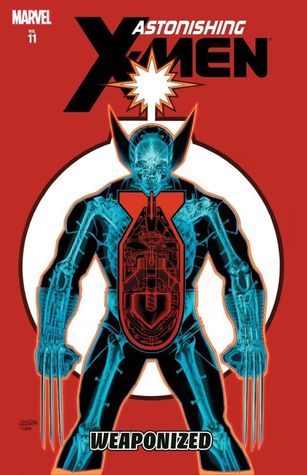 It’s the explosive aftermath to the year’s most talked-about wedding! The X-Men are on the run, and Northstar accepts a deadly assignment. Meanwhile, newlywed Kyle learns the hard way marrying Northstar also meant marrying his family. And in this case, that means the X-Men! Will Kyle and Northstar survive their first married mission? Meanwhile, Susan Hatchi reveals her connection to the X-Men. How long can the team survive with her nanobombs circulating through their bloodstreams?As Hatchitech weapons start appearing around the globe and civilians are caught in the crossfire, the X-Men must make a decision: take down Hatchi or save their teammate Karma! Plus: Someone is attacking friends and associates of the X-Men, and it’s up to Wolverine and his team to stop them. Collecting ASTONISHING X-MEN (2004) #52-56 and ANNUAL #1.

Warbird is on the run, labeled an enemy of Earth as well as the Shi’ar. Now the X-Men must decide whether to help her or bring her in. But what’s the secret of that alien artifact she’s uncovered? Then, in the aftermath of X-Termination, Iceman begins to deal with the aftershocks of his multi-dimensional ordeal. A catastrophic storm has buried much of the northern hemisphere under the deadly weight of snow, creating a kingdom where only one man rules: Bobby Drake. But Bobby’s mind has become fragmented and lost. Who will stop his reign of terror? Plus: Wolverine and Gambit hit the road in a stolen Lamborghini… with an alien stuffed in the teeny tiny trunk! Collecting ASTONISHING X-MEN #57-59 and ASTONISHING X-MEN #62-68.