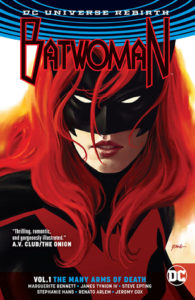 Someone is selling cutting-edge weaponry on the black market, and their aim is to kill as many people-from as many nations-as possible. With help from her intrepid assistant, Julia Pennyworth, and their high-tech mobile command center, the yacht Sequoia, Batwoman quickly tracks the weapons to their source: a small, lawless island known as Coryana, home to pirates, outlaws…and a year of Batwoman’s life. Back before she joined the Bat-Family, Kate Kane spent some time with Coryana’s unofficial matriarch-and nearly lost herself in the process. Now her past is quickly catching up to her, and if Batwoman can’t figure out who to trust, the next thing she loses will be her life!

Although this series picks up on plot threads that were established in Detective Comics and Batwoman (2012), it can be read on its own and does not require prior knowledge of the character.

“Pairing scribes Bennett and James Tynion IV, the writer of Detective Comics, is a smart move: they’ve each proven their skill with the character in different ways, tackling humor, action and genuine emotion with deft hands. It helps that they’re both also queer-identified—with Bennett the first queer woman to write the out-and-proud lesbian crusader’s solo series since the character’s modern debut in 2006.” (Source: Paste Magazine) 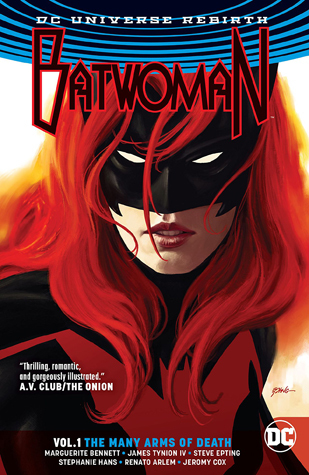 Batwoman, Vol. 1: The Many Arms of Death

Batwoman is on the hunt for the deadly terrorist group called the Many Arms of Death, but little does she know that their leader, the Mother of War, is on the hunt for her. Soon Kate Kane finds herself abandoned and alone in the Sahara Desert, at the mercy of the man the Many Arms of Death calls the Needle…but his victims call the Scarecrow! Kate’s only hope for escape is to work together with her fellow prisoner: Colony Prime, her father’s second-in-command and one of Kate’s most bitter enemies. Now, with both Batwoman and Colony Prime under the influence of the Scarecrow’s deadly fear toxin, they’ll have to fight their way through their own worst nightmares to make it out alive. Unfortunately, when someone has lived a life like Kate Kane’s-one of murder, loss and betrayal-fear itself might be enough to destroy her! Writer Marguerite Bennett (Bombshells: United) and artist Fernando Blanco (Midnighter & Apollo) explore the horrors of Batwoman’s past…and how they’ll affect her future.