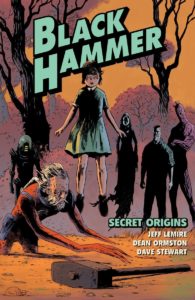 Once they were heroes, but that age has long since passed. Banished from existence by a multiversal crisis, the old champions of Spiral City—Abraham Slam, Golden Gail, Colonel Weird, Madame Dragonfly, and Barbalien—now lead simple lives in a timeless farming town. Even as they try to find their way home, trouble has a unique way of finding heroes wherever they are!

Starred review: “Lemire’s best stories (the Essex County trilogy) are permeated with loss–his characters are always pining for something that once was and can never be again. While reveling in the pulp fantasies of silver age superhero comics and EC’s lurid sci-fi/horror stories, this collection is as much a study of loneliness and isolation as it is a superhero deconstruction. It opens with six former superheroes who’ve been mysteriously trapped on a small farm for a decade. Each chapter, beautifully illustrated by Ormston (Lucifer) with eerie, stripped-down realism, explores each hero’s identity, origins, and path to ending up on the farm. As the narrative unfolds, the haunting backstories add greater context and intrigue to the mysteries of the present. There’s an astonishing clarity to the characters and their motivations amid what could easily become a convoluted backstory filled with interstellar exploration, multiverse travelling, alien diplomacy, and quiet farm life. If Black Hammer lives up to its early promise, it will deserve a place on the shelf right next to the Watchmen series.” (Source: Publisher’s Weekly)

“In Black Hammer, however, domesticity is not a choice, but a prison — and not an ending but a beginning. Lemire and Ormston’s story reverses Superman’s seminal journey from Smallville to Metropolis: Black Hammer’s dysfunctional heroes awaken, after their climactic Spiral City battle with the Darkseid-like Anti-God, to find themselves trapped in a small, rural farming community. The series opens 10 years after these events, which we learn of in flashback as we are introduced to the family the heroes have been forced to make of themselves — both literally, as their collective secret identity in the farming community, and metaphorically, as outsiders bound together by distinct iterations of a common past.

“Lemire doesn’t try to hide the influences on his characters. Flashback sequences glossing their superhero pasts rely on at least passing familiarity with the genre’s historical tropes. Abraham Slam is an aging pulp adventurer with a Charles-Atlas-hero-of-the-beach-as-Captain-America backstory. Barbalien is a “warlord from Mars” combining the shape-shifting and outsider status of Martian Manhunter with the militant Martian culture of Edgar Rice Burroughs’s John Carter. Golden Gail is a reversed version of Fawcett’s Mary Marvel, a woman who ages normally but, when she speaks the magic name of the wizard Zafram, becomes a super strong nine-year-old who flies. Colonel Weird is Adam Strange with a hefty dose of Jim Starlin–era Adam Warlock psychedelia. Talky-Walky is Weird’s robot sidekick, part Robby the Robot, part Vision, with a little bit of Sue Storm’s early ’60s domestic duties thrown in. Rounding out this group of misfits is Madame Dragonfly, a reclusive mystic who evokes the narrators from DC’s classic horror anthology comics like House of Secrets (she even brings along her own house). In addition, we hear in flashback about the titular Black Hammer, an African-American mash-up of Kirby’s New Gods and his version of Thor, who at the time the series begins is dead.” (Source: LA Review of Books) 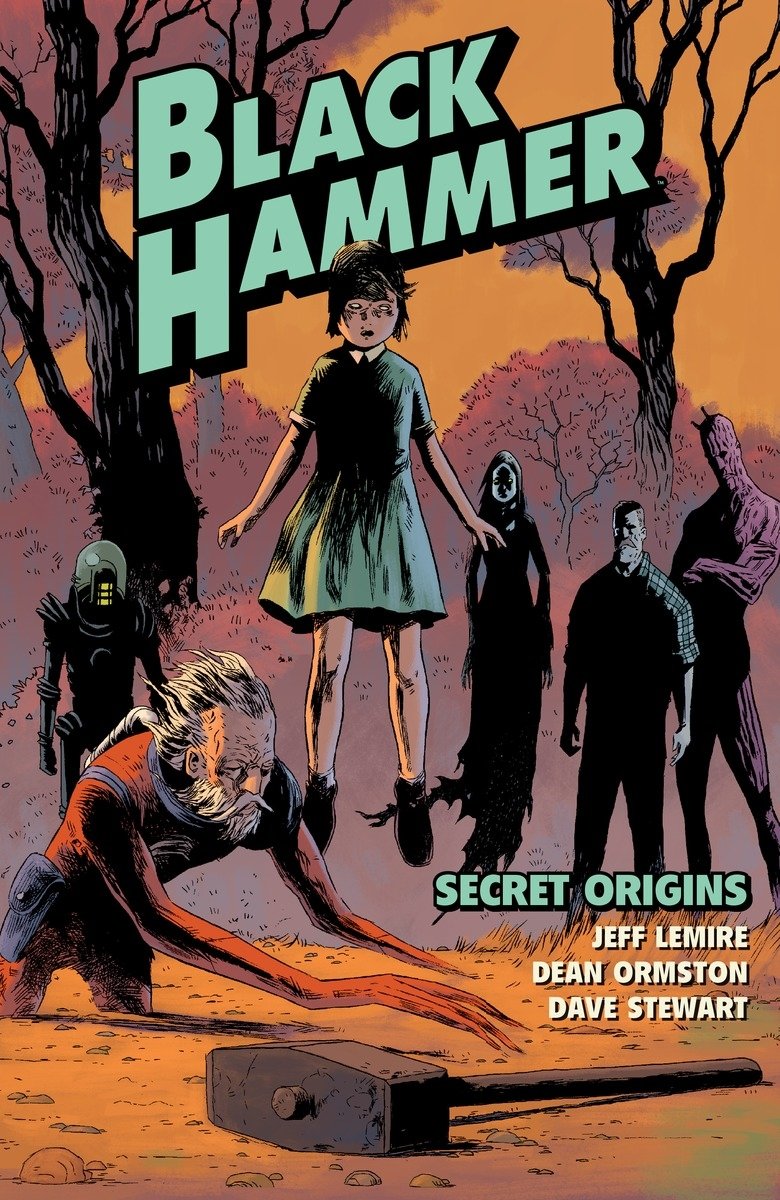 Once they were heroes, but that age has long since passed. Banished from existence by a multiversal crisis, the old champions of Spiral City—Abraham Slam, Golden Gail, Colonel Weird, Madame Dragonfly, and Barbalien—now lead simple lives in a timeless farming town. Even as they try to find their way home, trouble has a unique way of finding heroes wherever they are! 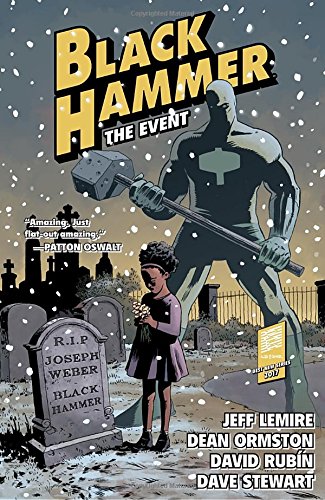 When a visitor from the outside world arrives on the Farm, looking for the Black Hammer and bringing news of Spiral City to its Golden Age heroes, everything changes. Her arrival stirs up old memories and awakens new hope in the marooned heroes and they make a new attempt to escape their strange prison.