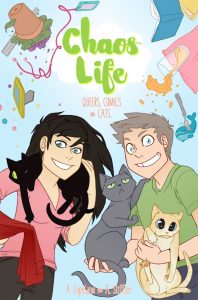 ChaosLife is a semi-autobiographical comic. It focuses on a queer relationship between A. Stiffler and K. Copeland, who create the comic! It also delves into politics, GSM issues, mental health, pop culture, cats and other randomness.

The central relationship in this comic is between an agender person and a cisgender lesbian. The mental illness depicted is co-creator Copeland’s real life paranoid schizophrenia, and the disability depicted is Copeland’s epilepsy.

This series is tagged as “adult” for a handful of comics that center around mature jokes, e.g., jokes about sexual kinks.

Autostraddle: “Drawn to Comics: Support the ChaosLife Kickstarter if You Love Cats, Comics, and Agender Folks”