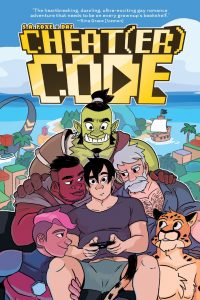 Kennedy and his boyfriend Seth have been together six years, and honestly, it’s pretty comfortable. That is, until the couple gets into a huge, potentially relationship-changing fight. Kennedy turns to his trusty video games to distract himself, but when a random power surge hits, he’s transported inside his video game library. Dazed and incredulous about his digital predicament, Ken finds himself seduced by a silver daddy, rutting with a couple of barbarians from an epic fantasy, and sorting through a lot of confusing feelings about his favorite anthropomorphic cheetah character. Kennedy will need to confront his biggest fears to get back to reality before the game glitches him out of existence, but sometimes, the unexpected (and unexpectedly sexy) is just what you need to hit the reset button.

This is a work of erotica with frequent depictions of nudity and explicit sex.

Several characters are shown to have darker skin tones, but the racial and / or ethnic identities are not established on panel.

Self-harm is alluded to, but not directly referenced or depicted.

“This comic is smutty! That’s either a pro or a con depending on your perspective, from mine it’s a major pro… for others it could be very off-putting. Let’s just say it’s very Not Safe For Work! The basic concept is that Ken comes home to find his partner in the act of cheating on him. This then leads to a kind of “seven stages of grief” over the relationships ending, played out in a sort of virtual gaming world.” (Source: Impulse Gamer)