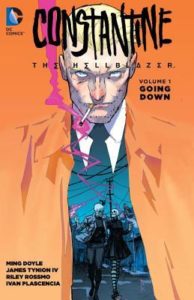 The dead can’t die again—even within the supernatural circles that surround John Constantine, some things are impossible. But when the ghosts that haunt the occult detective start being murdered, it becomes clear the rules have changed. Far worse than ordinary death, this second death means oblivion—no afterlife, no way back. To stop it, Constantine must explore the barriers between the mundane and the extraordinary: the thin places. The investigation takes the Hellblazer from New York City back home to London, where he joins up with an old rival, now an exorcist in Her Majesty’s Secret Service. Their dark, tangled history together is filled with music and magic, failed friendships and disastrous romance. But even if Constantine somehow survives the supernatural serial killer, the price involved could leave whatever’s left of his soul beaten and broken.

Sexual acts as well as nudity are sparse and not drawn in great detail, no genitalia is shown.

“Doyle and Tynion have a mixture of magic and persuasive wit in Constantine’s dialogue, talking about the darker parts of the world and how it’s best to just look away from the nastiness lest you get sucked in. It’s classic Constantine, lulling bystanders into doing what he needs, but also having that extra edge in his pocket to make the process just a little bit easier. It’s self-serving and there are consequences to others (as Gaz the ghost notes, the clerk will almost certainly be fired); in other words, business as usual.” (Source: CBR)

“Tynion and Doyle clearly love this unlovable lout named John Constantine. They bring a humanity to John that makes us simultaneously repulsed and attracted to him. Both Doyle and Del Rey convey these feelings beautifully in their very distinct styles and are partnered with colorists that contribute to the storytelling as much as everybody else.” (Source: Multiversity Comics) 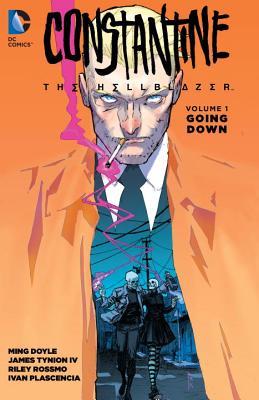 Constantine the Hellblazer, Vol. 1: Going Down 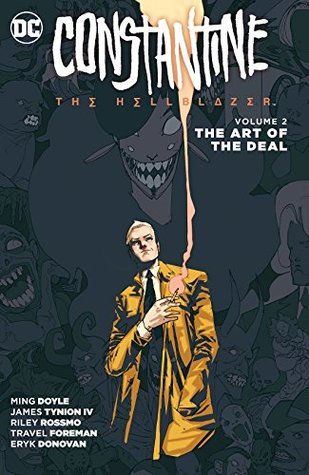 Constantine the Hellblazer, Vol. 2: The Art of the Deal