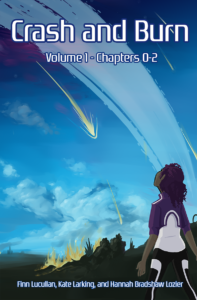 In the not-so-distant future, tensions between humanity and the ornos — a genderless race of bird-like aliens — are running high. When the H.S.V. Concord, a ship bearing both the ornos’ imperial heir apparent and a group of human peace keepers, disappears in uncharted space, it seems inevitable that the two species will go to war.

But, unknown to those in charge, a small group has survived the crash of the Concord. Led by Cora, one of the human survivors, the group must figure out how to get along, and how to get home… before both their worlds, as they know them, come to an end.

From: Crash and Burn

This series features a race of genderless aliens that use the pronoun “xe”.

When viewed online, this comic is accompanied by an audio score composed by Sappho Hansen Smythe and Ariel Fiess.

In addition to being available online, this series can be purchased in single print (via Gumroad) or digital issues (via Gumroad or Comixology), as well as in a print collection of the first three issues.

“Crash and Burn is a whole new frontier of science fiction! The two-time Aurora-nominated web comic from queer creators Finn Lucullan and Kate Larking throws readers right into a beautiful, brilliantly-colored alien world with rich details and political intrigue that immediately pull you in, promising one hell of an adventure.

Set in the future, the comic explores the relationship between humans, some of which have access to incredible power that is beyond the scope of typical humans, and the Ornos, an alien race of beautiful bird-like creatures whose whole society is different from ours—including their ideas of gender and relationships. When the Ornos kingdom’s heir disappears in a crash with an entourage of human peacekeepers, war seems to be just on the horizon. But everything is not as it appears: the crash had survivors and the Ornos’ royal family is full of secrets. The group of survivors must work together, a task easier said than done as they discover they are all very different people.” (Source: Pride)