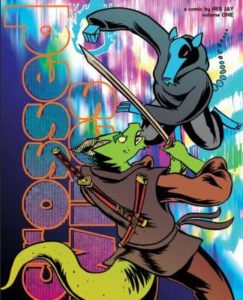 Alan, alias “Ultra Drakken”, is a hotshot young hacker — or at least he thinks he is. But when he crosses paths with mysterious cyber-activist Theresa (aka “Vrrmn”), he enters a world of danger and deceit. Can Drakken and Vrrmn save the grid? Can they even keep from terminating each other?

Both of the central characters of this series are queer trans POC.

“Crossed Wires delves into the world of hacking, revolving around our main hero, Alan Winters. After a chance meeting with Hacktavist VRRMN, Alan sets out to learn more about her and the “elite” world she traverses on the web. The art is truly wonderful throughout the series. It’s slightly cartoonish, yet has this edge of chaos and anarchy, an almost ominous feeling from characters like VRRMN herself.” (Source: Comicosity)

“And thank god, but basically all the hackers seem to be queer and/or trans, which is as it should be, imo. I’m sick of stories about “countercultures” where everyone is a cishet – it destroys my suspension of disbelief! It’s just not realistic. Alan is trans and has a friend who makes avatars who’s nonbinary, but I also get a trans vibe from Cass, the sysadmin at Alan’s university – plus far-to-the-side characters like Ala5, who uses neutral pronouns. There hasn’t been any romance so far, but there’s a lot of background gay hints: Two of Alan’s roommates share a room and don’t appear to be a man and a woman; Cass and Theresa seem to have some sort of messy history; Alan used to engage in homoerotic Kingdom Hearts roleplay over instant messenger. It’s not stuff that most straight readers would pick up on, but a nose like mine can sniff out the signs: this comic is gonna get gay. In fact, I think it’d be fair to say that it already is gay, and it just hasn’t come up yet, which is a writing strategy that I approve of.” (Source: Yes Homo) 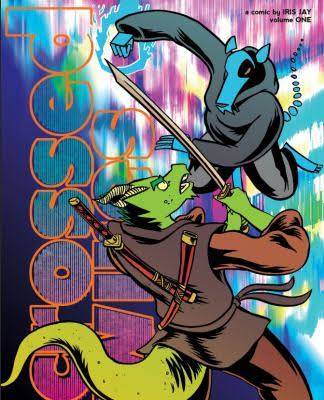 Includes chapters 0 and 1 of the ongoing webcomic series.