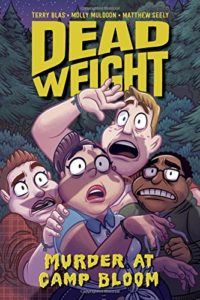 Deep in the Oregon wilderness sits Camp Bloom, a weight-loss camp where “overweight” teens can “get in shape.” Jesse would rather be anywhere else, but her parents are forcing her to go. Noah isn’t sure if he wants to be there, but it’s too late to turn back. Tony is heartbroken at the thought of giving up his phone and internet. And Kate… well, she likes the hikes, at least. As far as these four teens are concerned, it’s just another boring summer. Until one night, when Jesse and Noah witness a beloved counselor’s murder. The body’s gone by the next morning, but a blurry photo leads to one clue—the murderer is one of the camp’s staff members! But which one? As Jesse, Noah, Kate, and Tony investigate, they quickly discover that everyone’s got their secrets… and one of them would kill to keep theirs hidden.

“Jesse has been sent to “fat camp” for the summer instead of the fashion program she wanted. Tony is a returning camper, a shy black kid with glasses who loves technology. Noah is also returning and wants some special attention. Ben is gay and wants to transcend gender norms and spend more time with the girls. Kate is also gay and would rather be alone in the woods than hang with other people.

Jesse and Noah sneak out one night and witness a murder in the woods that’s quickly covered up. The victim is Counselor Cory, who’s lost enough weight to be considered buff. The other staffers all have their secrets. The chef responsible for healthy meals sells candy bars out the back door. The head nurse is a smoker. The camp leader is herself overweight, which is damaging her business.

My biggest problem with the story was that I never got a fully developed sense of these characters. I was told their quirk or motivation, but as the story played out, they felt like paper dolls being moved around instead of people. Their voices are all the same, which is particularly strange, given that the writers talk in an end note about it being “important for us to have the characters sound and be distinct from one another.” With such a large cast, the problem might be just not enough space for everyone to get the kind of development they needed.” (Source: Comics Worth Reading)

“Four teens attempt to solve the mystery of a murdered camp counselor.

Latinx Jesse’s family makes her attend Camp Bloom, a summer weight-loss camp, while black Tony is excited to be with his buff role model, Counselor Cory, who is white. Third-year attendee Noah, also white, wants to prioritize his health and lose weight but is unsure whether he can. One night, Jesse sneaks out to procure contraband chocolate. Noah follows her, and both stumble upon Counselor Cory’s murder. Purely by chance, the crime turns out to have been documented on Jesse’s camera. Noah looks for help from Kate (also white), who finds Camp Bloom a safe refuge from homophobia. Kate includes Tony, heartbroken that his mentor is dead, in the investigation. Armed with a list of the camp counselors and a camp map, the foursome decides to find the murderer. Close-ups of the protagonists convey great emotion and are interspersed with more active panels featuring the quartet and other characters. As the teens work through the suspects, another murder occurs, and the young sleuths nearly become victims themselves. Exacting readers may be disappointed by the lack of clues or clear motives for the murders and by the strange ending. Those willing to forgive these shortcomings will find this lighthearted mystery with diverse characters an accessible, if not entirely satisfying, read. (Graphic novel. 13-17)” (Source: Kirkus Reviews)

Newsarama: “Murder At Away Camp In ONI’s DEAD WEIGHT“ 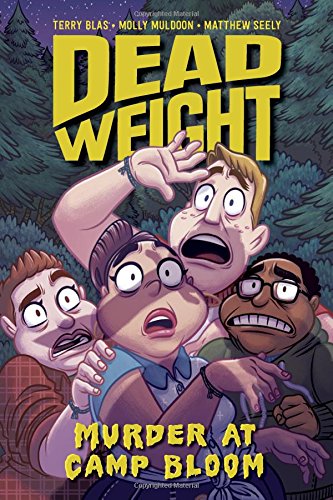