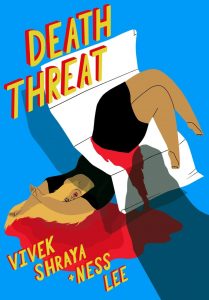 In the fall of 2017, the acclaimed writer and musician Vivek Shraya began receiving vivid and disturbing transphobic hate mail from a stranger. Celebrated artist Ness Lee brings these letters and Shraya’s responses to them to startling life in Death Threat, a comic book that, by its existence, becomes a compelling act of resistance. Using satire and surrealism, Death Threat is an unflinching portrayal of violent harassment from the perspective of both the perpetrator and the target, illustrating the dangers of online accessibility, and the ease with which vitriolic hatred can be spread digitally.

“Without any restricting structure, you are taken on the same journey as Shraya herself, and it’s not necessarily a fun one to be on, but Shraya brings to it her own meditation on the experience and an affability despite the fear that both work to protect you rather than victimize you along with her, and that’s an honorable way to express personal moments of vulnerability to people you don’t know after such an experience.” (Source: The Beat)

“Employing flat primary colours, plus the odd gradient, Lee (who primarily works in illustration and ceramics) mixes expansive full-page layouts with panel-based narrative. Lee’s images are beautiful and the illustrations are sharp, the colours (done by Emmett Phan and Hieng Tang) recalling the simplicity of protest posters. The images of pointy-haired trolls are metaphorically spot on and merge seamlessly into visuals of flames, Shraya’s hair, and other shapes. The panel layouts tie the death threats into the shape of Shraya’s everyday life – going to work, making breakfast, playing guitar, watching goat videos online.” (Source: Quill & Quire)

In Magazine: “July/August 2019 Cover Story: Vivek Shraya And The Beauty Of Turning Hate Into Art”

Out: “The Joyful Side of Death Threats with Vivek Shraya”