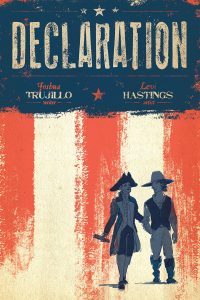 Set against the backdrop of the American Revolutionary War, Declaration tells the story of two men, Hiram and Zacherius. As the the Colonies take steps towards rebellion, our lovers are caught in the conflict.

Only one issue of Declaration has been published. It is available through the creator’s store.

“The year is 1776 and revolution is slowly brewing in America. But behind closed doors, there’s another kind of revolution happening as lovers Hiram and Zacherius declare their feelings for one another. It’s a fine start as the creative team has crafted a romance with its own share of obstacles (both men are of significant class difference — not that they notice). Nonetheless, readers will be rooting for the central characters. That’s not a statement. That’s a declaration.” (Source: Entertainment Weekly)

“It’s a foregone conclusion that in this post-Hamilton era, any new media set during America’s Revolutionary War is now forever going to draw comparisons to said musical and its creator, Lin-Manuel Miranda, and more than likely fall short. However, with Declaration #1, Josh Trujillo and Levi Hastings pick up one of the most important directives and legacies of Hamilton–that of writing marginalized groups back into the historical narrative–and they do so admirably. Like Miranda, Trujillo and Hastings belong to this new generation of creators who are writing (and drawing) themselves back into the historical narrative.” (Source: Women Write About Comics)

The Philadelphia Inquirer: “Meet the artists behind ‘Declaration,’ a queer Revolutionary love story“