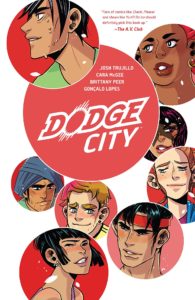 Tomás is the new captain of the Jazz Pandas dodgeball team, and he’s got a certain knack for keeping an eye on on the ball (or several!). However, he’s untested and still not quite part of the team. If the disorganized Jazz Pandas want to make it to summer regional championships they’ll have to pull together under Tomás’ leadership.

Of the main ensemble cast, three are queer, including Drew, who is black, and Huck, who is deaf, the third being Elsie. The lead protagonist, Tomás, has not been shown to be queer.

A second volume has not been announced as of November 2018.

“Trujillo and McGee created a core cast of characters that are bright and compelling, a true team made up of a variety of personalities that don’t feel stale or too familiar. Dodge City is inclusive and sweet without being cloying, a truly welcoming all-ages book that allows adorable art and a strong team ethic to stand front and center, rejecting conventional wisdom that demands violence and needless interpersonal conflict to drive a story forward.” (Source: AV Club)

“The diversity of the Jazz Panda is one of the main selling points of Dodge City, Volume 1. It’s a multiracial cast, with LBGT+ representation, and even a deaf dodge player that are all united under the single goal of playing dodgeball together. The dynamic between the different players is refreshing in its familiarity and optimism. Elise and Drew are two queer ladies trying to deal with Drew’s impending departure to college. Huck’s deaf makes it difficulty for him to communicate with the team, although Tomás makes a concerted effort to learn some American Sign Language. Amardeep has his own familial concerns to deal with and uses Dodgeball as outlet, and Judith is guilt-ridden over previous actions and wants to atone for them. While Tomás is ostensibly the central character, it is truly an ensemble cast that breathes life into the story of Dodge City.” (Source: Black Nerd Problems)

“Those personalities shine due to McGee’s art with colors from Brittany Peer and lettering by Aubrey Aiese. Much like their personalities, everyone is unique. Their looks vary though each team is uniform in a weird way. What’s solid is the variation of general looks as far as clothes but also height, body shape, and skin color. There’s a wide range here and there’s so much detail on each character it feels like we get a better idea of who they are based on all of the small clues.” (Source: Graphic Policy)

“On that note, if there’s one element of the story that seems consistently outstanding, aside from the book’s characterizations, it’s how the talents of writer Josh Trujillo, illustrator Cara McGee, colorist Gonçalo Lopes and letterer Jim Campbell combine to make the book such an immersive sensory experience. McGee’s exceptional use of motion lines, starbursts and other visual effects give the art a fluid quality that almost makes it feel like you’re watching a series of gifs. The illustrations practically vibrate with intensity. Similarly, Campbell’s extraordinary letters not only provide the steady, visceral soundtrack referenced above, they also help you feel the percussive force of every ball as it strikes its target or whizzes by someone’s head, throwing you into the action. Meanwhile, McGee’s expert paneling reinforces the narrative’s furious pace. On page after page, her off-kilter panel borders barely contain the action as balls fly this way and that, intermittently interrupted by the occasional inset panel that zooms in to a certain character’s facial reaction, unequivocally showing their heat-of-the-moment emotions.” (Source: Multiversity Comics)

“It is also extremely refreshing to see a sports comic book feature a cast that don’t all have roughly the same chest to waist ratio and body fat measurements, and to not have their varying shapes and sizes be presented as obstacles to be overcome. When Tomas finds out his teammate Huck is deaf, the onus is on Tomas to be accommodating and work out, with Huck, the best way to communicate during a game. There are no moments in Dodge City where McGee turns any of the characters’ bodies into a joke, and Trujillo never makes any indication that their bodies are in any way responsible for the Jazz Pandas’ losing streak. Instead, this is a team full of people with varying levels of natural skill and, more importantly, dedication to the team, who come together every once in a while to try and win a game, which is honestly for a large swath of readers is just as interesting as the exploits of a team of cookie-cutter shaped athletes trying to become the world’s greatest [insert sports practitioner here].” (Source: Newsarama) 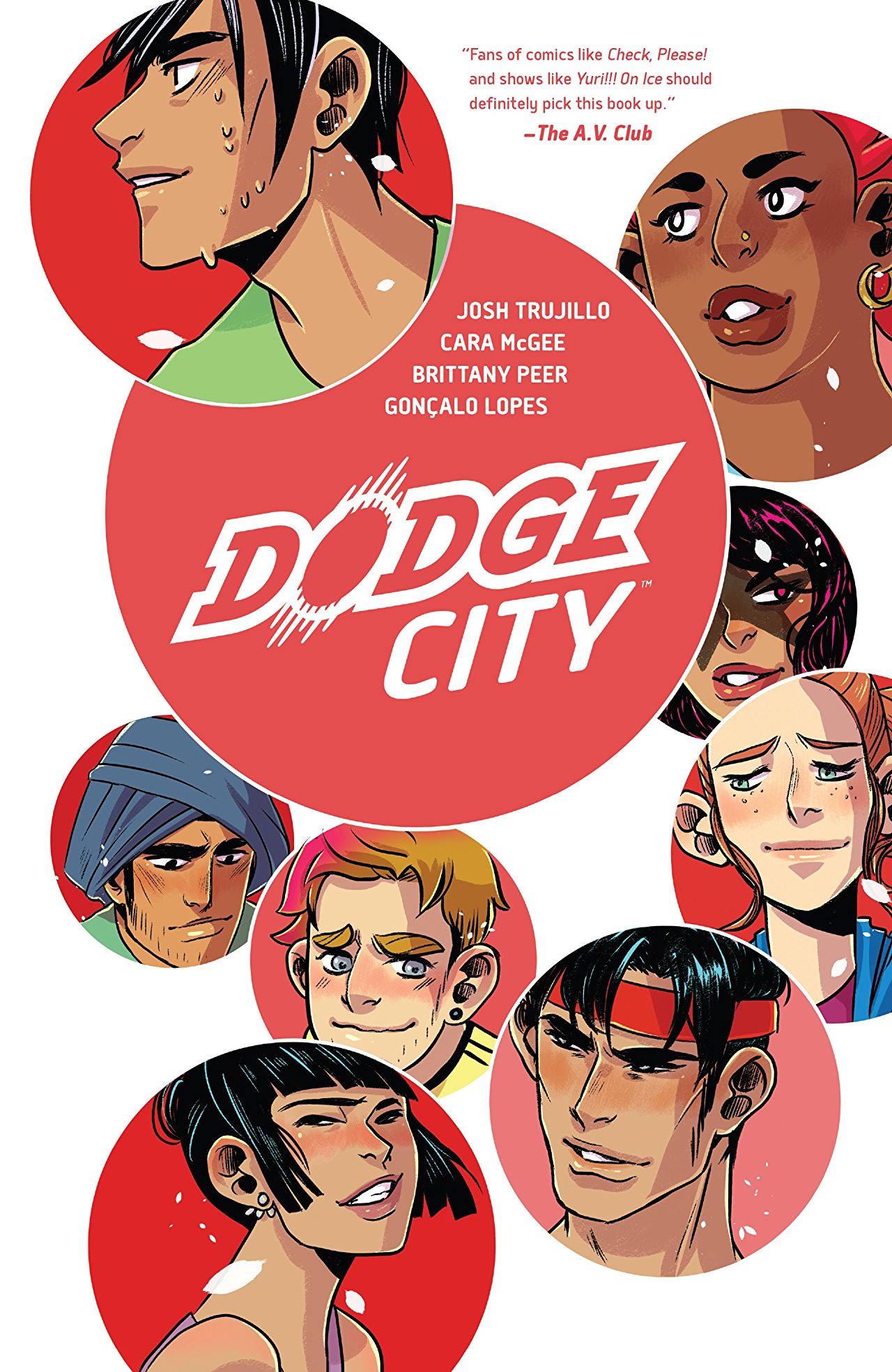