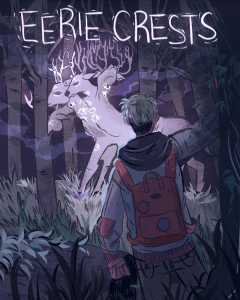 Dallas Margolin thought things were going to be okay. He was about to graduate high school. He was Willow Grove’s star baseball player. He had good friends. Overcoming things from the past, You’d think, for once, the universe was kind to Dallas. That is, until one day, before an important highschool match, his best friend Malek starts planning to move away for college. In an attempt to make Malek stay with him, Dallas makes a terrible mistake.

Something lurks in the quiet town of Blue Crests.

The main character of Eerie Crests is Dallas, a bisexual Jewish trans boy who has a crush on his best friend Malek, a pansexual Lebanese boy. The series also includes trans girl and nonbinary minor characters. The characters’ sexualities and heritages are identified in this post and this Twitter thread by the cartoonist.