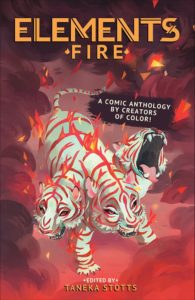 ELEMENTS: Fire is a comics anthology of 23 stories by creators of color from around the globe. With stories featuring peaceful warriors, blossoming brujas, godly hackers, and a child versus a volcano, we are the main characters of our own stories, not the sidekicks or token characters. This is an anthology that is full of our passions, magic, and inner fire because our diversity is not just a buzzword: it’s our reality!

“Bringing together short graphic narratives from 32 contributing artists, debut editor Stotts has crafted a group exhibition that showcases the deep and diverse talent available in the realm of comics. The anthology is a response, in part, to the dearth of creators of color represented in mainstream comic publishing. As Shing Yin Khor writes in the foreword: ‘We are tired of the scraps being offered to us at the traditional publishing table, when we have already proven…that there is both an audience and a market for our voice and our work.’ The pieces are united by aesthetic and theme. Each is colored mostly in black and white, with select use of red to highlight elements within the narrative. Each deals in some way with the idea of fire, and many feature storylines that revolve around loneliness, inadequacy, untapped ability, and unexpected friendship. Some pieces miss the mark, providing either too little or too much information to hook the reader in just a few pages. Others use simplicity to their advantage, as in the cinematic ‘Cactus Flower,’ by Sarah DuVall, in which lush panels and a few sparse words document a woman’s mysterious magical rite. The equally laconic but visually busy ‘Metta Helmet,’ by Deshan Tennekoon and Isuri Merenchi Hewage, offers a fable on the contagiousness of kindness. In ‘Breathe,’ Kiku Hughes creates an apocalyptic folk tale from the distant future that is as universal as it is inscrutable. Other standouts include the fantastical ‘Firefly’ by Myisha Haynes, the abbreviated space opera ‘Pulse’ by Der-Shing Helmer, and the heartwarming ‘Starfall’ by Ash G., which ends on the lovely sentiment—shared by two young seekers—that ‘we’ll find the answers without hurting anybody, won’t we?’ The comics are meant for readers of all ages, and while each is accessible enough for youngsters to enjoy, most grapple with larger concerns that are relatable to a much older audience. Both longtime fans of comics and readers new to the medium should find plenty here to entertain and inspire.

NPR: “‘We Are Here’: Questions for Comics Creator Taneka Stotts” 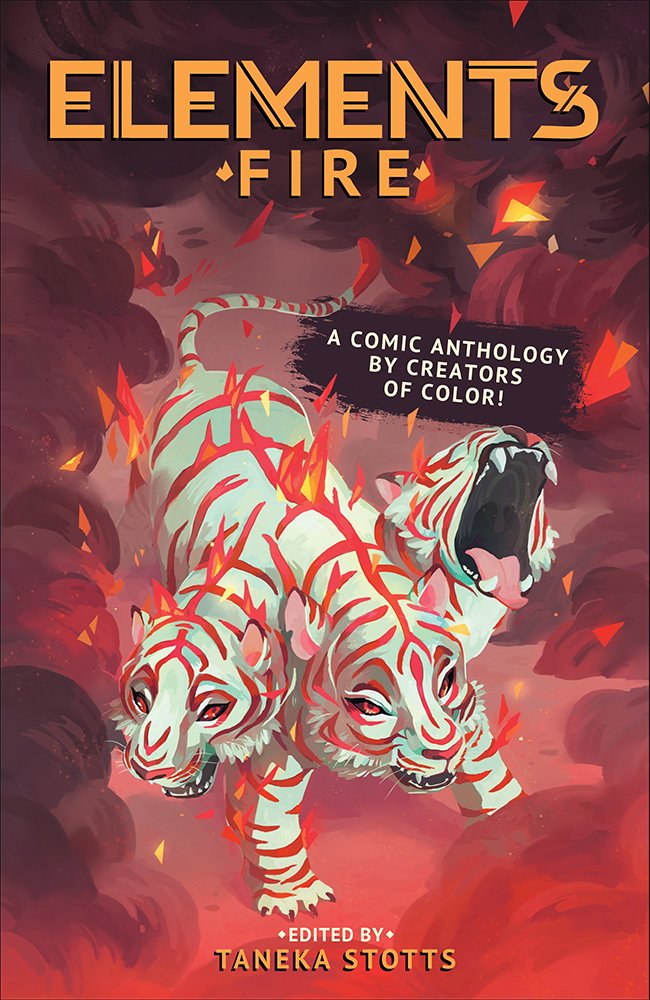