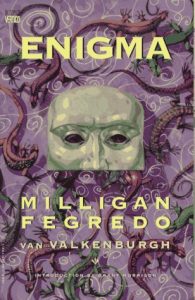 Michael Smith lives a meaningless life of routine and boredom. But when Enigma, his favorite childhood hero, inexplicably comes to life, Smith must discover the secret behind his improbable existence.

The series depicts a situation in which the focal character, who begins the story as straight-identifying, is “turned gay” by the titular character. However, given the opportunity to resume his former sexual orientation, the focal character declines.

“Duncan Fegredo’s art is astounding throughout the series, as it is a rare instance of an artist changing his style over the course of the book not simply because he’s getting better, but as a complement to the story itself.  Early on, Fegredo’s art is sketchy and full of what appears to be superfluous lines.  This coincides with the time in Michael’s life during which he himself is sketchy and full of redundancy.  Michael is vaguely rendered because he doesn’t know who he is, and his identity is uncertain.  He wanders through a haze of life, and Fegredo’s art reflects this nicely.  As Michael begins to form and take hold of an identity, Fegredo’s art becomes much tighter and clearer.  He is bringing the world into focus because the characters are coming into focus, and Michael is resolving the conflicts that tear at him and keep him from becoming a fully actualized human being.  It’s really interesting to gaze at the book, because in some early issues, it’s difficult to figure out what’s going on – it doesn’t help that a character like the Head is truly grotesque.  That’s the point, however, and Fegredo makes it with his art as much as Milligan makes it with his writing – as long as we are conflicted over love and the truth about ourselves and our reality, we won’t be able to tell what’s going on.” (Source: CBR)

“This is a story about falling in love with a heroic ideal, and about being transformed as a result, and Michael’s embrace of his own queerness resonated with me on so many levels. Especially since Michael’s discovery of his “new” sexuality goes along with a greater transformation, in which he becomes a stronger, better, more realized person, and it’s hinted that he evolves beyond the limitations of humanity. Michael’s encounters with Enigma help him to become a truer version of himself, and it’s a glorious metaphor for the whole process of realizing that you’re not just the role that society smushed onto you from above.

In retrospect, it is super weird and kind of problematic that Michael doesn’t just discover he’s really queer, but that his sexuality is changed by a magic superhero mask—but when I read this comic, it made perfect sense to me. It felt like this book was speaking directly to me, to the escapist part of my brain that was seeking a way out of a yucky constrained existence through stories about heroes and weirdos.” (Source: Tor.com) 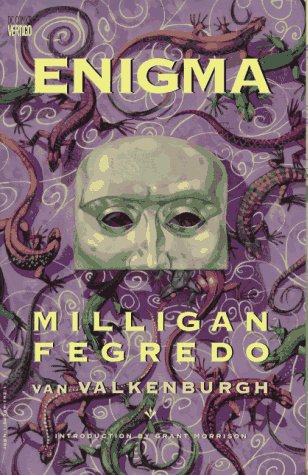