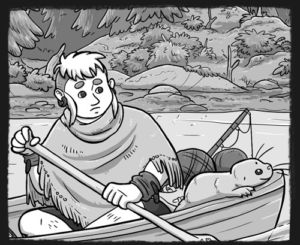 Eth’s Skin is a comic about a fisher named Eth living on the edge of a ragged ocean.

Under a sickle moon on an empty stone beach Eth mistakes a selkie skin for their own, and ends up having to make a journey to a distant cove in order to put things right.  It’s a queer (and genderqueer) fantasy full of monsters and low tides, cool non-binary individuals, queer relationships, and a pet pygmy harbour seal named Goblin.

Töby, one of the main characters, explains, “I’m just not attracted to things the way others are”. Whether he identifies as asexual, aromantic, both, or neither is unclear.

“The world of Eth’s Skin is a casually queer universe, where it’s not unusual in the slightest to meet someone who falls outside the gender binary, or who is involved with more than one partner.

The expressive line art combines with a well-developed sense of grey shading technique, leaving the art simple yet with a careful sense of background and place. The panels have a stillness to them that perfectly reflects the quietude of the solitary fisherperson.” (Source: ComicsAlliance)

“If you’ve been looking for a webcomic that features gender nonbinary characters and relationships outside of the heteronormative while telling a rich fantasy story, look no further than Sfé R. Monster’s Eth’s Skin, set in a world of floating townships, pesky fairies, and selkies with magical skin.

In a magical version of British Columbia, Eth lives a relatively simple life in city that floats upon rafts. Eth fishes, hangs out with their friends, and occasionally ventures onto land to visit the remote homes of beachwalkers. But Eth’s world is shaken up when Eth mistakenly picks up a selkie’s skin and finds they can’t let go of it.

It’s wonderful that Monster (who writes and draws, with inks by Skin Deep creator Kory Bing) has created a world where nonbinary characters and same-sex relationships are perfectly ordinary, but what’s especially compelling about Eth’s Skin is the fantastical construction of the world.” (Source: io9)