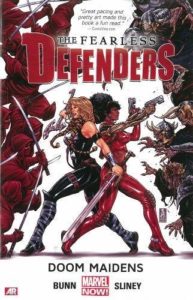 Valkyrie and Misty Knight are the Fearless Defenders, and not since Power Man and Iron Fist has an unlikely duo kicked this much – well, you know.

This series ended on a cliffhanger with issue #12.

“The biggest problem on this book, and has been since its inception, is the artwork. Sliney is a talented illustrator, but he’s simply not playing at a level high enough or consistent enough for this book to look the way it needs to look. Some pages are gorgeous and appear painstakingly rendered, while others feel incredibly thin, with poorly constructed facial expressions, weak storytelling choices, and impossible anatomy. While it’s true that the cast Sliney has to deal with was large to begin with and became insanely massive — a challenge for any artist — time and again the pages just do not live up to the demands of the story and characters. This issue especially starts strong, with lovingly rendered pages, and quickly devolves into bad anatomy, poor storytelling choices, and inconsistent execution. The double page spreads, intended to invoke the feeling of an epic battle, instead just feel like pretty pin ups that when examined fall apart, the characters appearing more as models posing, rather than warriors battling. To add insult to injury a few anatomy choices are laughable.

When it comes to “Fearless Defenders” there was simply an embarrassment of riches when it came to the characters on display, especially toward the end. It’s perhaps that embarrassment of riches that ultimately held this book back, because it never managed to be quite as good as its cast demanded, and in fairness to everyone involved, sometimes less is more. It’s hard to give everyone their due in a book so loaded with great characters. For example, the great Elsa Bloodstone has literally one line and no real actions in this issue. Still, for all its weaknesses, Bunn and Sliney clearly loved what they were doing, and I sincerely hope that Marvel continues to see experiments like “Fearless Defenders” less as failures and more as opportunities to learn from so that they may try again.” (Source: CBR) 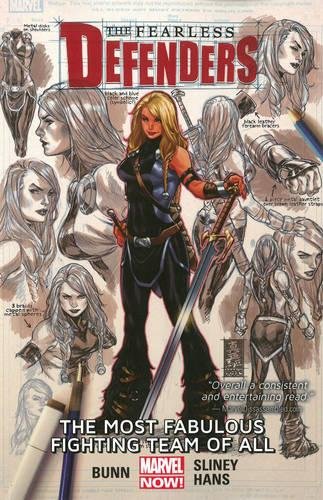 Fearless Defenders, Vol. 2: The Most Fabulous Fighting Team of All

It’s the biggest status quo change to date for the Fearless Defenders…but we’re not going to spoil it here! Misty kicked ass in Valkyrie’s world, now it’s time to see how Valkyrie fairs in Misty’s. But it’s not easy being an Asgardian shieldmaiden – especially when your boyfriend’s got a chip on his shoulder! Guest-starring Elsa Bloodstone, Venom, Dr. Strange, Iron Fist, Hercules, Werewolf By Night, and a legion of significant others! Then, it’s an Infinity tie-in like none other…because this one’s got dancing! With Thanos’ hordes invading Earth, the Fearless Defenders live up to their name! And when a gifted young woman discovers she has terrifying powers, will this new hero join the ranks of the Defenders?