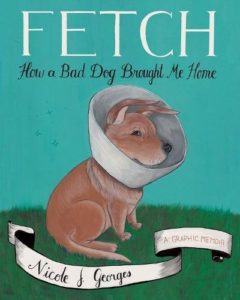 When Nicole Georges was sixteen she adopted Beija, a dysfunctional shar-pei/corgi mix—a troublesome combination of tiny and attack, just like teenaged Nicole herself. For the next fifteen years, Beija would be the one constant in her life. Through depression, relationships gone awry, and an unmoored young adulthood played out against the backdrop of the Portland punk scene, Beija was there, wearing her “Don’t Pet Me” bandana.

Starred Review: “Lambda Award–winning author/artist Georges’s (Calling Dr. Laura) prickly, moving account of growing up with a misbehaving mutt begins near the end of the duo’s time together. The author is hosting a Quinceañera for Beija, a shar-pei/corgi mix with issues, when the dog lunges at two children, one a toddler. This latest eruption sends Georges and Beija to the basement to reflect on their history. A 15-year-old Georges had rescued Beija in a misbegotten attempt to heal her boyfriend’s childhood traumas. That didn’t go as planned, nor did several tries to find the dog another home, so Beija becomes the author’s one constant, sticking with her through car wrecks and college evasions, a move from the suburbs to a Portland, OR, punk flophouse, and the transition from dating boys to dating girls. One sees the influence of Lynda Barry in chapters about the artist’s life as a “feral child,” drawn differently than those featuring teen/adult “Georges.” A West Coast vibe infuses her quest to rehabilitate her bad dog, with visits to a pet psychic, nods to Dog Whisperer Cesar Millan, and a stint working at an animal refuge. When Georges finds a lump while bathing Beija, the inevitable final act is touchingly, beautifully conveyed.” (Library Journal: “Graphic Novel from Nicole J. Georges, About Her Dog“)

Starred Review: ““Every dog manual will tell you not to pick the dog hiding at the back of the cage,” writes Georges (Calling Dr. Laura) in her second graphic memoir. Yet, in the midst of her own semi-feral childhood as a high school drop-out, Nicole adopts Beija, a mutt with an overly large shar-pei head, stubby legs, and a long dachshund body. Beija grows into a temperamental and challenging companion, with a hatred of men and a tendency to lunge at small children, and accompanies Nicole and her boyfriend to Portland, Ore., into a punk house full of underground musicians and artists. Fifteen years and many relationships later, Beija is still by Nicole’s side, having taught her the true definition of loyalty, love, and personal boundaries. Drawn in black and white with watercolor washes and elegant hand lettering, this book is an homage to classic zine aesthetics that captures an incomparable friendship. An honest, moving portrayal of the essential bond between humans and animals.” (Publishers Weekly: “Fetch: How a Bad Dog Brought Me Home“) 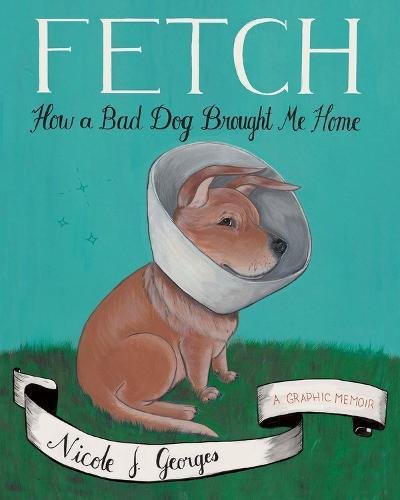 Fetch: How a Bad Dog Brought Me Home