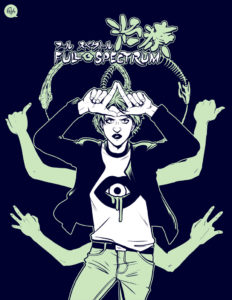 Varsity baseball slacker Quin and his long-time crush, troubled teen Damien, share a dangerous secret from their childhood. When Damien’s return from abroad shakes things up between Quin and his punk rocker partner, the boys end up in the middle of a series of alien outbreaks that attract the attention of their school’s meddling rookie Empath — a professional superhero attuned to the aliens’ separate physical reality. Quin just wants to help Damien and do right by his friends, but between keeping their secret safe and thwarting Dr.L’s prying eye, he’s suddenly got a lot more on his plate than homeruns.

The art in this series is largely monochrome, with some full-color sequences.

This series contains depictions of body horror and drug use, and is described by its creator as ” PG-13. Ish.”

Full-Spectrum Therapy has an ensemble cast which is predominately composed of queer characters. This includes an Indian-American asexual non-binary character, a bisexual genderqueer character, and a gender-non-conforming supporting character.

Individual print issues of this series are available through the creator’s Etsy.