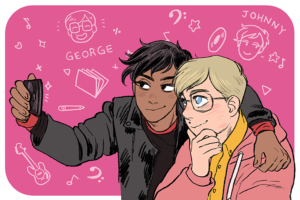 From: George and Johnny

George and Johnny is a slow burn romance between a white teenage boy and a South Asian-American teenage boy. Two supporting female characters are in a relationship as well.

Recommended for teen and up due to strong language.

“I’m so into George and Johnnie. I’m into its art and character design. I’m into its sweetness and kindness. I’m into the way it perfectly captures the feelings of weird teenagers who are figuring out their feelings and their sexualities. The comic doesn’t have a regular update schedule, so every time I see the comic’s creator Savanna Ganucheau tweet that she’s updated her comic, I can’t help but have a great day. I know that I’m about to read a comic that is all about the importance of friendship and being genuine. It’s a reminder that there’s good in the world and that there are people who want to remind us of that. It’s also a reminder that there are really talented people telling really cute queer love stories.” (Source: Autostraddle)