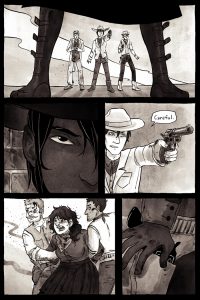 After her girlfriend is shot dead over gambling debts, gunslinger Jack resorts to necromancy to bring her back.

This series depicts frequent gun violence and some blood.

“Goth Western tells the story of Evie and her girlfriend Jack. When Evie is shot to death over an attempt by her scoundrel brother to steal her late father’s bar, cowpoke Jack sets out into the wilds with her corpse. There, she trades her soul to a god to bring her love back to life. The lovers make their way to Jack’s hometown, where they encounter a young man leashed to a death god. Another few towns over, a mysterious serial killer is slaughtering locals. Although almost entirely black and white, Livali’s watercolor-like artwork is emotive and expressive, the monochrome broken up with splashes of vivid red and detailed. It’s as beautiful to look at as the story is compelling.” (Source: Tor.com)