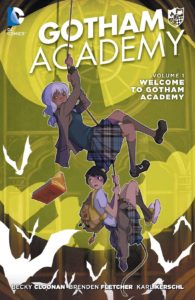 Welcome to Gotham Academy, the most prestigious school in Gotham City. Only the best and brightest students may enter its halls, study in its classrooms, explore its secret passages, summon its terrifying spirits… Okay, so Gotham Academy isn’t like other schools. But Olive Silverlock isn’t like other students. After a mysterious incident over summer break, she’s back at school with a bad case of amnesia, an even worse attitude… and an unexplained fear of bats. Olive’s supposed to show new student Maps Mizoguchi the ropes. Problem: Maps is the kid sister of Kyle, Olive’s ex. Then there’s the ghost haunting the campus, the secret society conducting bizarre rituals, and Bruce Wayne, the weirdo billionaire who funds the Academy – and may know the secret to Olive’s big mystery.

One of the main boys is implied to have a crush on another boy starting in issue #6. This is confirmed later in the sequel series, Gotham Academy: Second Semester.

“Who knew Gotham had its own, Hogwarts-like boarding school, complete with cavernous halls, buttressed ceilings, and a haunted wing? This new series, focusing on teen Gothamites, follows Olive Silverlock and her friend, Maps, as they poke around the creepy building investigating the mysterious ghost, a secret society, and other strange goings-on at their school. Meanwhile, Olive struggles to piece together her summer, her memories of which are distressingly blank, and find out what happened to her mother. Cloonan and Fletcher excel at giving their characters authentically youthful voices and behaviors, and they cleverly and compellingly unspool Olive’s story at a tantalizing pace. Kerschl’s warm, manga-inflected artwork employs eye-catching layouts, fantastic panel design, and a rich, inviting color palette unlike the shadowy, grim color schemes many Batman fans are used to. With plenty of intrigue and personable characters, this is the perfect vehicle to wrangle teen readers into the Batman universe. Fans of G. Willow Wilson’s Ms. Marvel series or Brian K. Vaughan’s Runaways will be just as pumped about this one.” (Source: Booklist, vol 112, number 12)

“Filled with spunky and quirky characters and unexpected plot turns, this work adds an intriguing and fresh layer to the Batman mythos. In this tale, Bruce Wayne, the school’s benefactor, is treated with disdain by Olive and the Batman signal is a daily occurence. Kerschl’s campy art is by turns luminous and gloomy, enhancing Cloonan and Fletcher’s energetic and sometimes contemplative text. The size and shape of the panels are used to great effect, adeptly building momentum with panache and verve. VERDICT The emphasis on friendships and high school drama mixed with action-packed sequences and an otherworldly tone makes this graphic novel perfect for not only fans of the franchise but those who enjoy boarding school fiction.” (Source: School Library Journal, vol 61, issue 6, p131)

The Beat: “As GOTHAM ACADEMY ends, Cloonan and Fletcher brace for the heartbreak” 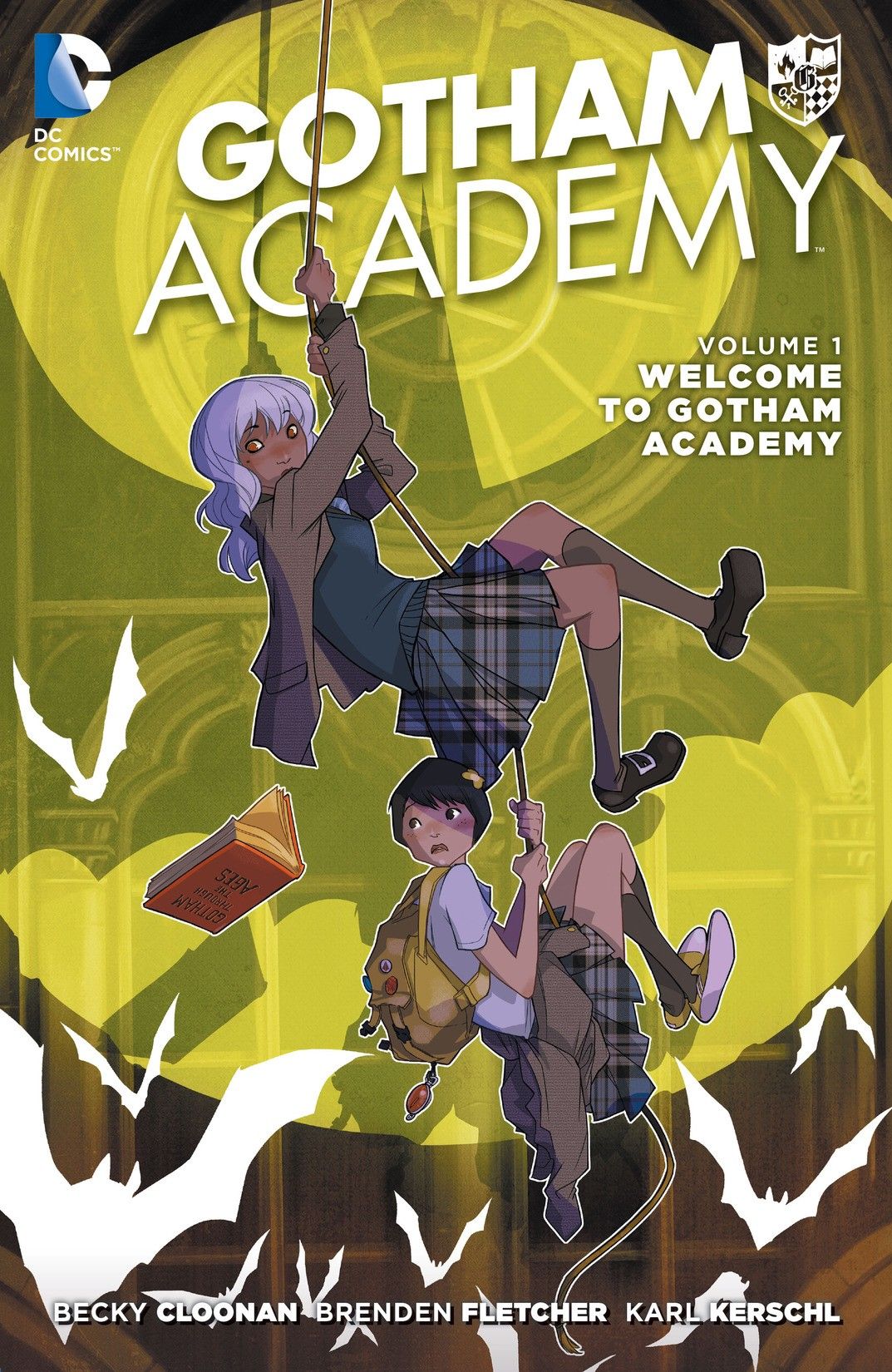 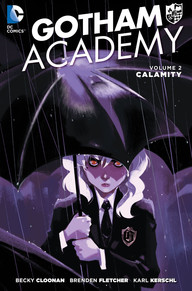 The sensational award-winning series continues and welcomes the academy’s newest transfer, Damian Wayne, as writers Becky Cloonan and Brenden Fletcher team with artists Karl Kerschl and Mingjue Helen Chen. At the beginning of the term, Olive Silverlock returned to Gotham Academy as a shadow of her former self. But thanks to her new friends and their Detective Club sleuthing, Olive was finally starting to feel whole again. But now, Olive is seeing ghosts. A spectral, robed figure is haunting the Academy-and haunting Olive in particular, appearing to her and giving sinister instructions. Could this spirit be the key to unlocking the secrets of her family’s dark past? Or is Olive simply losing her grip on reality? Collects GOTHAM ACADEMY #7-12 and DC SNEAK PEEK: GOTHAM ACADEMY #1. 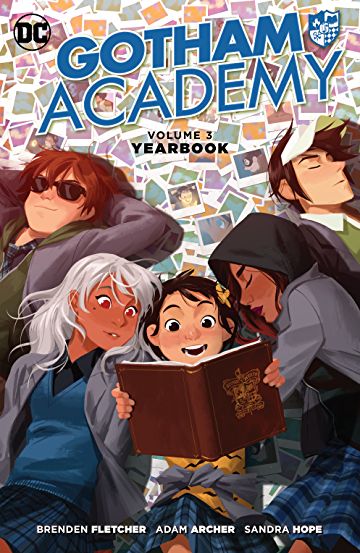 The students of Gotham City’s most prestigious prep school are back and they’ve just survived one heck of a year at Gotham Academy. Now it’s time for everyone to look back at some of the lost adventures from the school year that were in these stories from issues #13-18 and ANNUAL #1.