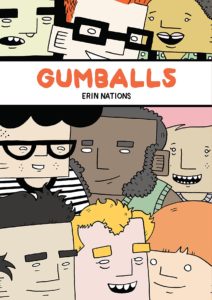 Gumballs dispenses an array of bright, candy-colored short comics about Erin’s gender transition, anecdotal tales of growing up as a triplet, and fictional stories of a socially inept love-struck teenager named Tobias.

Gumballs offers a variety of flavors that will surely delight anyone with a taste for candid self-reflection and observations of humanity.

From: Inside front cover

While Gumballs does not depict nudity, it does depict an anatomically realistic packer. One short comic in the anthology depicts sexual harassment, including groping and undressing, from Nations’ childhood through adulthood.

“Much of Nations’ material is autobiographical, detailing his upbringing as the middle of three triplets, the tedium of work at a grocery store, and his journey through gender confirmation as a trans man. But the collection also contains several unrelated threads, such as vignettes from idiosyncratic or off-putting dating profiles, and the fictional saga of Tobias, a gay high school outcast. Blocky and bold, Nations’ novel, expressive character designs and depictions of his own character shift subtly over the course of his transition. But some of the diary comics meander, and Tobias’s struggle, while charming, feels out of place amid weightier personal comics. The collection is at its most resonant when Nations grapples with issues like his unwanted, troubling accumulation of male privilege, or the everyday perils of social anxiety and depression. While the far-ranging scope distracts from the central story line, Nations presents a much-needed perspective on modern American life with a nifty art style.” (Source: Publishers Weekly)

“Erin rides his bike to work, deals with depression and anxiety, and just goes about his everyday life as a transgender man. Gumballs is a fantastic glimpse into Erin’s life as well as getting to know Tobias, and meeting Phillip and Ezra. Gumballs is important because it is a rare autobiographical depiction of being transgender, which greatly impacts public perceptions and visibility.” (Source: Virginia Library Association)

“‘I’m probably an anomaly in the trans community,’ Erin Nations’s comics avatar says while sitting astride a toilet in a women’s bathroom, pondering why he can’t bring himself to use the men’s. ‘I imagine most do not feel the same way.’ It’s a heartbreaking moment in a book filled with them. Nations is a tenderly observant man with a boldly angular visual style, and he establishes himself as a unique talent well worth watching with Gumballs, an anthology of his short, unmistakable meditations on shame, aspiration, and self-conception. Told in autobiographical vignettes about the everyday struggle of gender dysphoria and clever fictions about weirdos seeking love and acceptance, the writing is poetic in its bluntness and the inks are as dense as the emotions they capture.” (Source: Vulture)

“The travails and joys of being a triplet and daily life as a trans person are affectionately portrayed in this graphic novel memoir/short comics collection. There are short, long and one page features, so it’s easy to pick up and put down to enjoy. Nations helpfully color codes the categories of featured work, in a sweetly librarian-like way. Reading of his childhood of gender dysphoria and the process of transitioning must be comforting to other trans people, and is a great insight for the rest of us. Gentle humor, mainly self-deprecating, makes the book feel realistic and truthful. Fun is poked, and none are spared, including himself and the trans community.  I especially like his reflections on male privilege, as he becomes more increasingly perceived as male by the public. The art has a unique stylization of people, which makes everyone look slightly ridiculous.” (Source: Youth Services Book Review)

This book collects Gumballs #1-4, plus 32 pages of brand-new content!

Gumballs tips its hat to the classic alt-comic tradition of Eightball, Optic Nerve, and Box Office Poison, but speaks with a delightfully fresh voice for the modern age. — a 160-page, full-color softcover trade paperback/collection with French Flaps, 6.625″ x 9.5”