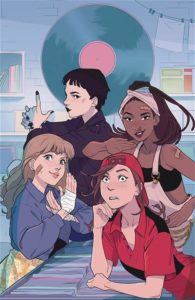 But when the staff’s favorite singer mysteriously vanishes the night before her band’s show in town, Chris finds out her co-workers are doing more than just sorting vinyl…her local indie record store is also a front for a teen girl vigilante fight club!

The first three issues of this series were originally published under the title Hi-Fi Fight Club. The series was retitled before the release of its fourth and final issue (Newsarama).

“Employing music’s ability to be ‘about expression and identity’ (as Chris says), Heavy Vinyl is also about these young women coming into their own and finding confidence to be their authentic selves. The four-color art work is heavily influenced by manga, but never succumbs entirely to the style.” (Source: The Advocate)

“If want a long-haired soft butch working in a record store in New Jersey in 1998 who gets recruited into a girl gang to fight the patriarchy, look no further than Carly Usdin’s Heavy Vinyl. It’s whip-smart, action-packed, hilarious, and full of more ’90s pop culture references and tributes than you can catch on one reading.” (Source: Autostraddle)

“Usdin seamlessly sets up these dynamics to deliver a team that you want to follow as a reader, as these different personalities unite for the common cause of music and justice. My favorite interaction is between Maggie and Chris as Usdin gives the most panel time to this relationship, setting up an adorable will-they-or-won’t-they plot between the two.” (Source: Newsarama)

The MNT: “Lighting the Match with Boom’s Shannon Watters” 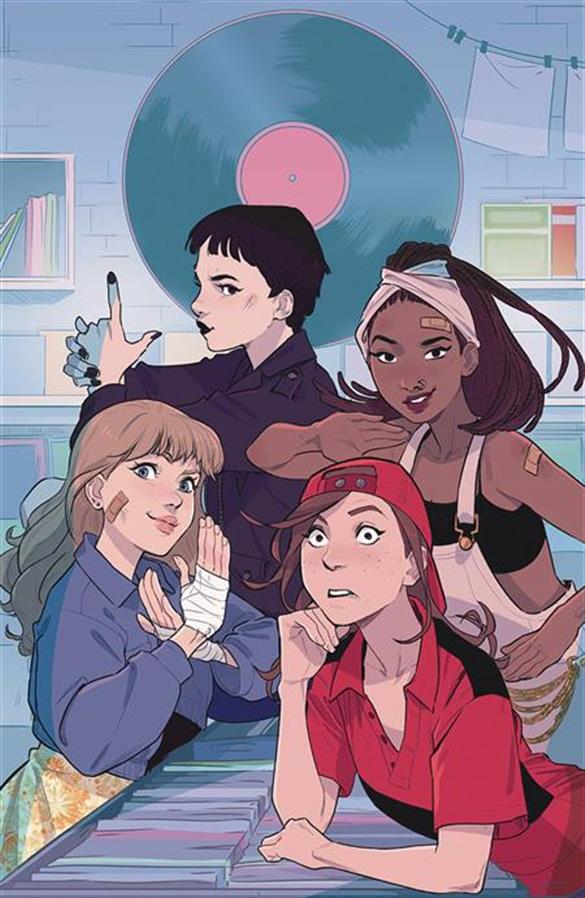 New Jersey, 1998. Chris has just started the teen dream job: working at Vinyl Mayhem, the local record store. She’s prepared to deal with anything – misogynistic metalheads, grunge wannabes, even a crush on her wicked cute co-worker, Maggie. But when the staff’s favorite singer mysteriously vanishes the night before her band’s show in town, Chris finds out her co-workers are doing more than just sorting vinyl… her local indie record store is also a front for a teen girl vigilante fight club! Collects the complete limited series.