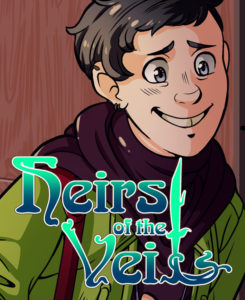 Heirs of the Veil is an Urban Fantasy story, about a witch taking on the task of finding her mother in a town that is not quite what it seems at first glance. It deals with topics of taking on responsibilities and growing up and is directed at teens and young adults.

The comic also features an LGBTQ+ inclusive cast and touches on topics of gender, sexuality, and dysphoria. While not being the main focus of the narrative it is an important part of the comic overall.

From: Heirs of the Veil

In addition to the content warnings tagged, the About page for the comic warns for body horror, depression, and childhood emotional neglect.

A print collection of the first chapter of Heirs of the Veil is available from the creators at conventions.