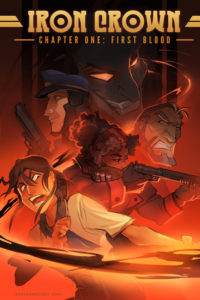 Diane Wiess thought being a dictator’s daughter was a rather cushy position, all things considered.

…until demons threatened the southern border of Chandera, and riots began to consume the rest. Anticipating retaliation against his misdeeds, her father strikes a deal with an equally infamous mercenary company – the Iron Crown Brigade. Their mission: escort Diane out of the crumbling country into the safe haven of the powerful Imperium, and protect her at all costs.

The demon of war bound by her mystical dagger – Keeper – complicates things.

Iron Crown is an action-adventure story that was inspired from the question of: what would it be like for a dictator’s daughter to survive a coup, and what kind of life does she forge afterwards?  What ensues is a high-octane story with a richly detailed world, wry humor, and a colorful cast of mercenaries that happily embrace Diane as family as she hunts for ex-Judge Abraxas – the one who started it all. Along the way, as Diane reluctantly confronts the shadows of her fatherÊ¼s dark legacy, and begins to piece together the enigma of Shard – the arch-demon and her shadow in the journey – as he faces his own bloodstained past.

“Iron Crown has a polished look without being too rigid in line or shape and Krad, clearly sporting a sophisticated toolbox of techniques, uses them with a savvy restraint. Krad’s coloring is also notably well done, adding a dimension that envelops the characters in their environment. Wherever Iron Crown goes, it’ll be worth reading.” (Source: The Comics Journal)