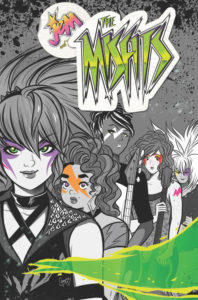 Their songs may be better, but the Misfits have lost their label and nobody will touch them in the music business. On the ropes and desperate to get back on top, they’re forced to consider the worst case scenario… A MISFITS REALITY TV SHOW. Though it promises the chance to get them back in the spotlight, it comes with a heavy, privacy-destroying price.

This series spins out of Jem and the Holograms.

“The Misfits are a staple in Jem and the Holograms, and every band needs a good rival. I have been waiting for this series to finally debut, and it’s finally here!

This story is told from the perspective of Pizzazz, the neon green-haired leader of the all-girl punk rock band The Misfits. It picks up where Jem and the Holograms left off, with The Misfits burning bridges and living up to their wild and difficult to work with name. Pizzazz is at the center of it all, and begins to realize that her dreams and the dreams of her fellow band mates is going to go down the drain-all because of her own choices. She’s presented with a choice to make to keep the Misfits relevant, but it just so happens to be one that she’s strongly against.

Kelly Thompson is fantastic, that is just a fact, and we all know it. She, in her usual style, keeps a great hold on the story and writes smoothly from one transition to the next. The writing is light-hearted with serious undertones that have many layers of complexity, and I think that really breathes a different sort of life into what seems like just a colorful story with some kick ass ladies on the surface.

We are seeing a change in artists with Jenn St-Onge (isn’t that just the coolest name?) taking hold of The Misfits. I was so taken with previous artists that I almost felt against a new artist coming into this series. But change is good, and even though Jenn’s art is more playful, it works. The characters still look like themselves, and they’re completely distinguishable from each other. A big thing with revamping Jem into a comic book was actually making the women in the series look different from each other. They’re not all stick-thin and actually look like real woman, and Jenn keeps this train a-movin’ in her own artistic style, and pulls it off superbly. Jem is a colorful world, and M. Victoria Robado keeps this theme going strong. There is a multitude of hues, and I’m very happy to see the flavor that really brings this band of literal Misfits together.” (Source: Comic Crusaders)

“As anyone who is familiar with this IDW incarnation or the classic 80s Saturday morning cartoon knows – The Misfits are better. Or at least much cooler. And as the opposition and rivals to our underdog heroines trying to become music superstars, they are the perfect choice for a spin-off title.

I have personally waited for this since the first arc of the regular Jem comic as Misfits leader and chronically confrontational front woman, Phyllis Gabor AKA Pizzazz, has been my favorite character. While most of the Jem crew seem likable, relatable, and generally good people, Pizzazz is difficult, layered and contradictory. Hardly a cartoonish villain, despite the best attempts of people to make her out to be such, her actions have always seemed to be informed by hidden motivations and a personal history that if we only knew the details would make the puzzle of Pizzazz all make sense.” (Source: Outright Geekery) 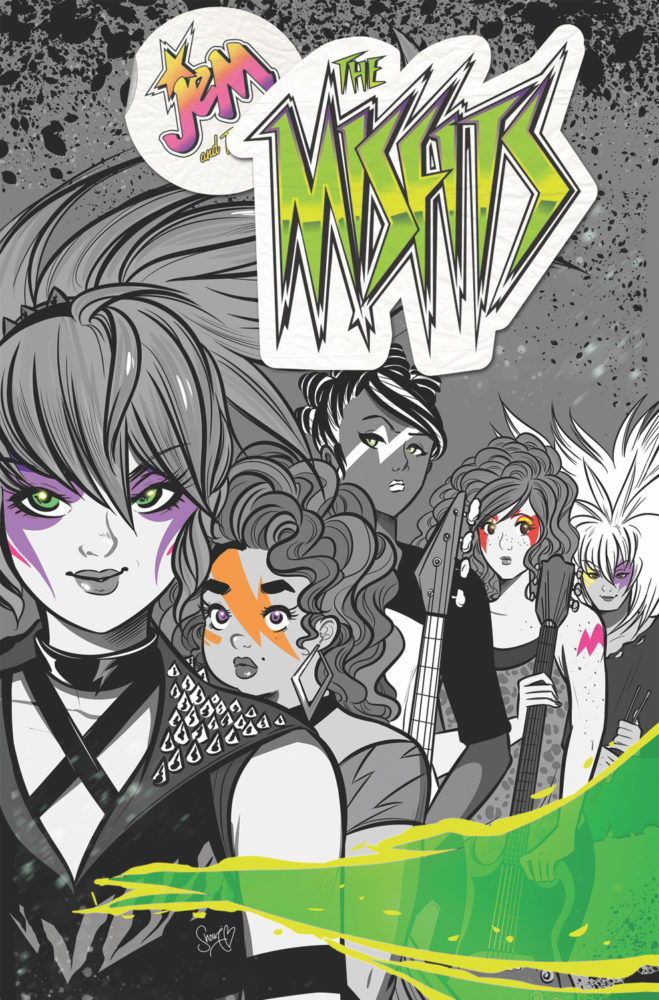 Jem and the Holograms: The Misfits

Their songs may be better, but the Misfits have lost their label and nobody will touch them in the music business. On the ropes and desperate to get back on top, they’re forced to consider the worst case scenario… A MISFITS REALITY TV SHOW. Though it promises the chance to get them back in the spotlight, it comes with a heavy, privacy-destroying price.