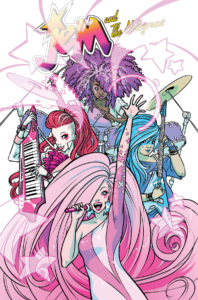 Meet Jerrica Benton—a girl with a secret. She and her sisters team up with to become… JEM AND THE HOLOGRAMS! But what does it mean to be JEM today? Fashion, art, action, and style collide in Jem and the Holograms!

This series exists in continuity with, but can be read separately from Jem: The Misfits.

“Campbell, an excellent designer who has had plenty of practice drawing young women immersed in music and counter-cultures in her adult series Wet Moon (created under the name Ross Campbell), has also done a fantastic job of differentiating the characters.

The original characters all had the exact same bodies and faces and were mostly differentiated by their hair and clothing. They looked like interchangeable Barbie dolls, but then, that’s basically what they were: Hasbro had two basic molds, male (for Rio) and female (for the rest of the line). Campbell has about a dozen female characters in the first six issues of the series (if you count Jerrica and Jem as two different people, and, of course, in terms of design, they are two different people), and no two of them look exactly alike. Different in height, weight, build, muscle mass, facial construction–they are as different as any dozen women you could find in the real world.

If girls of the 1980s had trouble finding a Hologram or Misfit that looked something like them, teenage girls of 2015 shouldn’t have that problem. And that is the target audience, teens, rather than little girls. While Thompson and Campbell’s narrative is certainly all-ages friendly—the only swearing comes in the form of the giant green skulls that sometimes fill hot-headed villain Pizzazz’s dialogue bubbles, the romance never progresses byond hand-holding and kissing, and there’s no alcohol or drug use or anything unsavory–it’s a fairly complicated narrative, more CW than Disney Channel.” (Source: School Library Journal)

The Advocate: “Trans Jem Artist on Coming Out and Creating Comics”

The Comics Journal: “An Interview with Sophie Campbell” 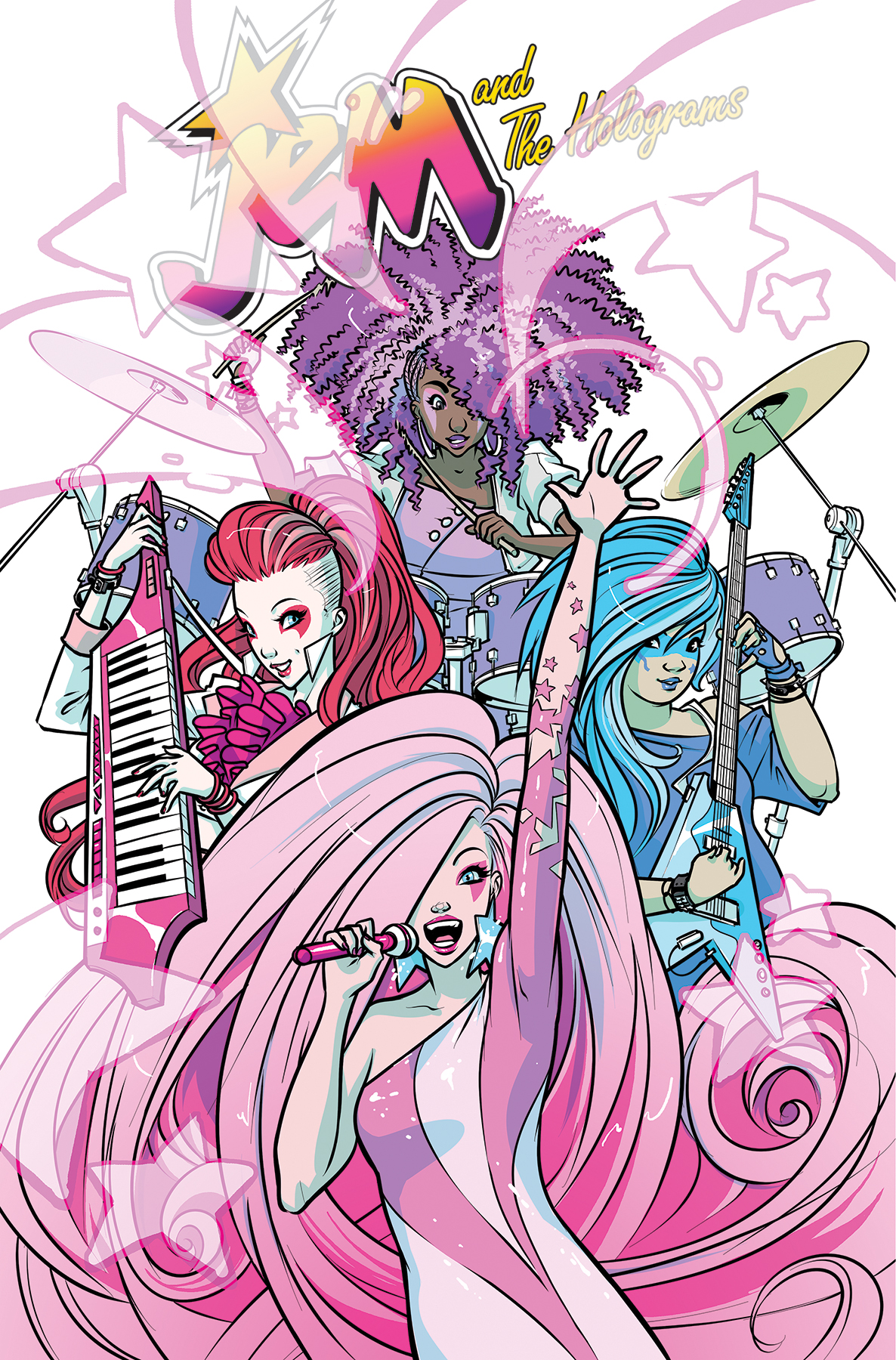 Jem and the Holograms, Vol. 1: Showtime!

Collects Jem and the Holograms #1-6. 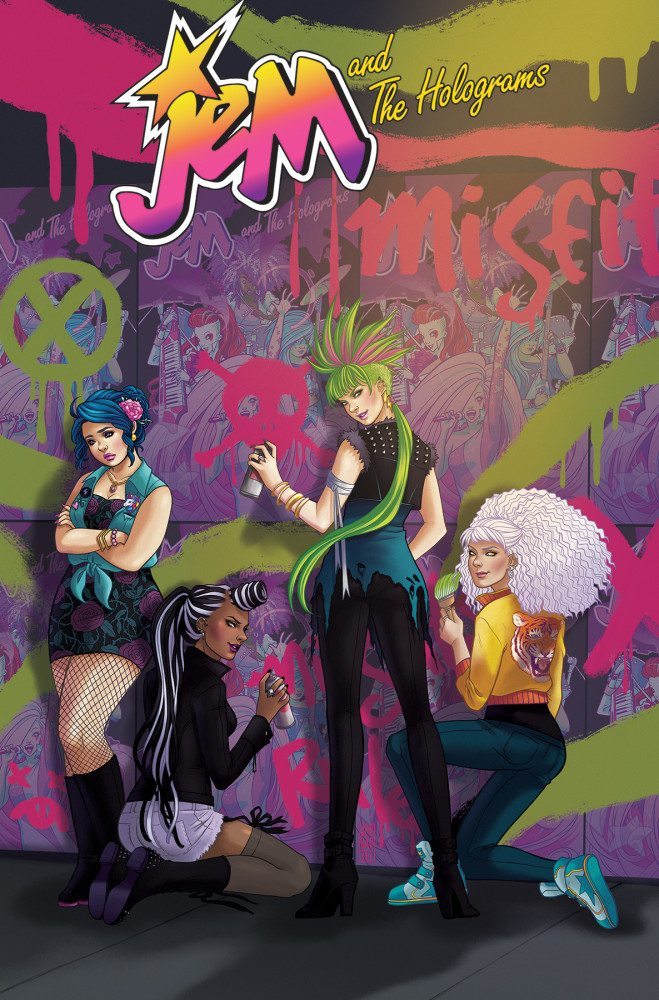 Jem and the Holograms, Vol. 2: Viral

Jerrica and her sisters face their biggest threat yet — success! Meanwhile, the Misfits aren’t taking these upstarts lying down… as they find themselves under new management. Plus, go behind the scenes and see THE HOLOGRAMS and THE MISFITS from a whole new perspective… that of music columnist Rio Pacheco! Collects issues #7–10, the Outrageous Annual 2015, and the 2015 Holiday Special. 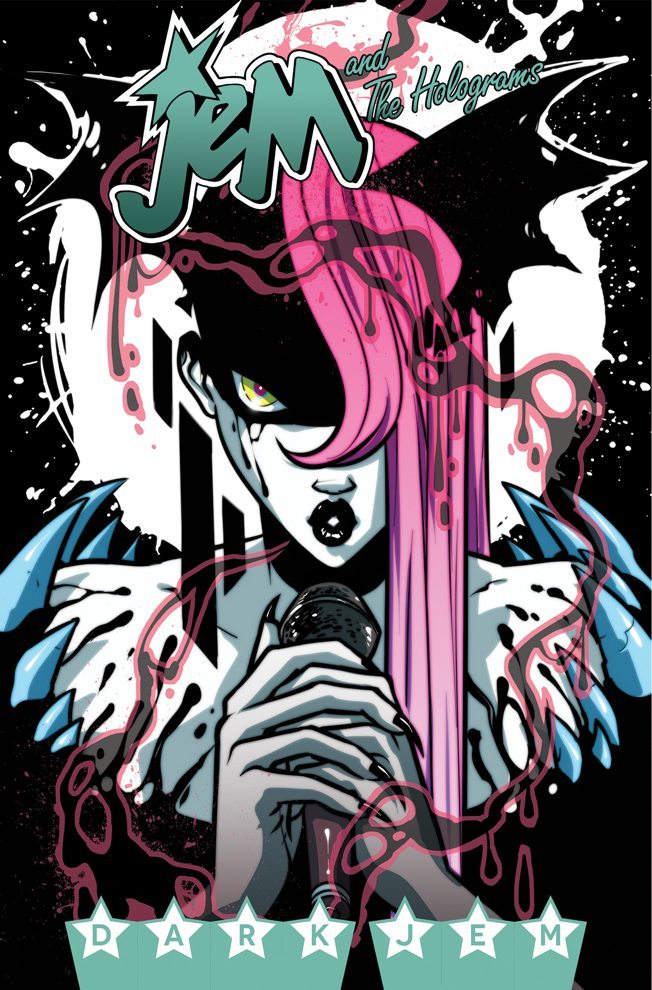 Something is wrong with SYNERGY! As JEM AND THE HOLOGRAMS’ first tour begins, something — or someone — called SILICA is after them… but who, or what, is she? Meanwhile, THE MISFITS need to replace their lead singer fast — and maybe even… permanently?!? Collects issues #11–16. 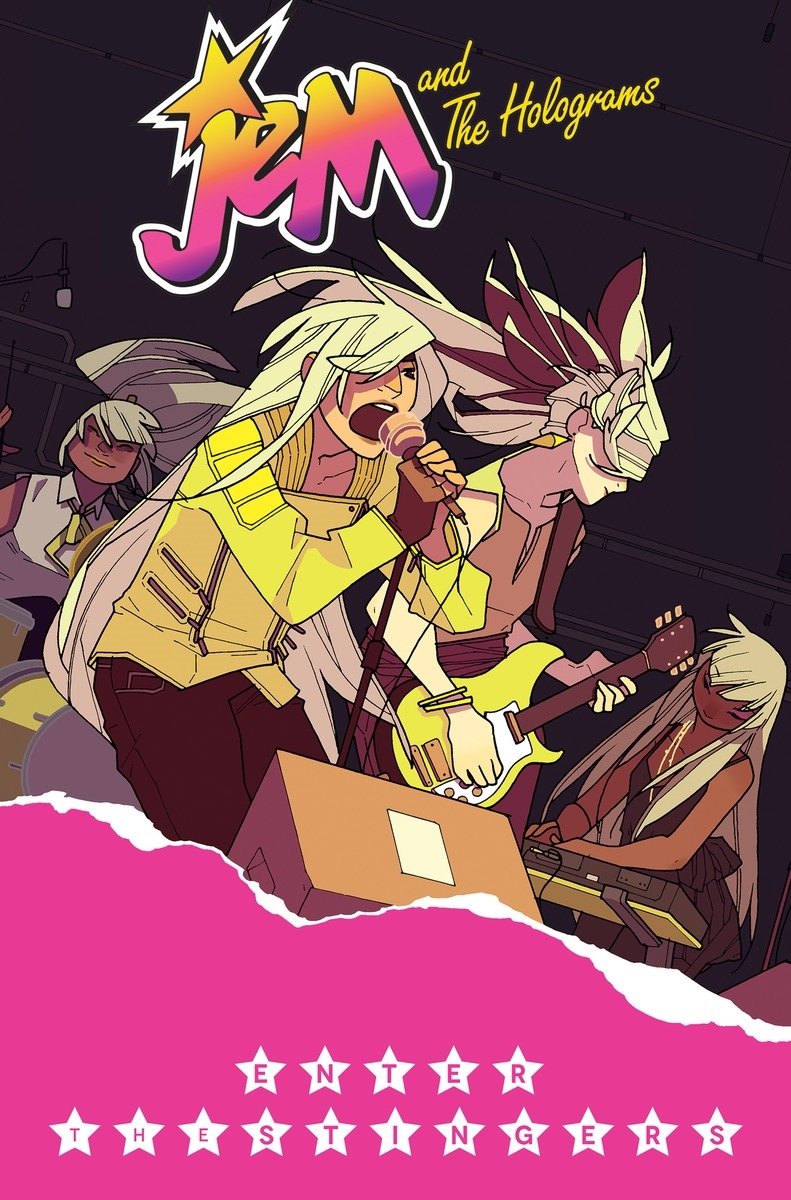 Jem and the Holograms, Vol. 4: Enter the Stingers

Still reeling from the shattering conclusion to “Dark Jem,” Jem and the Holograms regroup–desperate to find a path
forward. Meanwhile, THE MISFITS find themselves with a unique problem… one lead singer too many! Plus, a European super group takes the U.S. by storm… The Stingers! Meet Riot, Rapture, Minx, and… Raya! Collects the stories “Ch-Ch-Changes” and “Enter The Stingers” from issues #17-23. 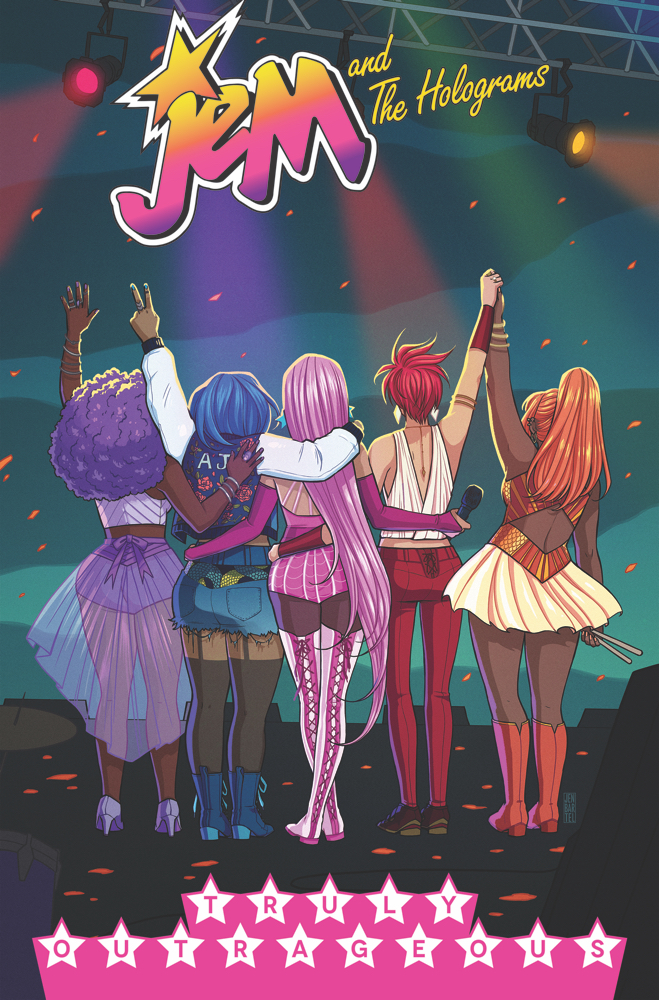 Jem and The Holograms head to Hawaii for some much needed rest and relaxation but with The Stingers renting the beach house next door they instead get shenanigans, betrayals, hi-jinx, and… volcanoes?! Meanwhile, has Jerrica finally made a decision about her future and thus the future of JEM? Collects issues #24–26, and the double-sized 2017 Annual! 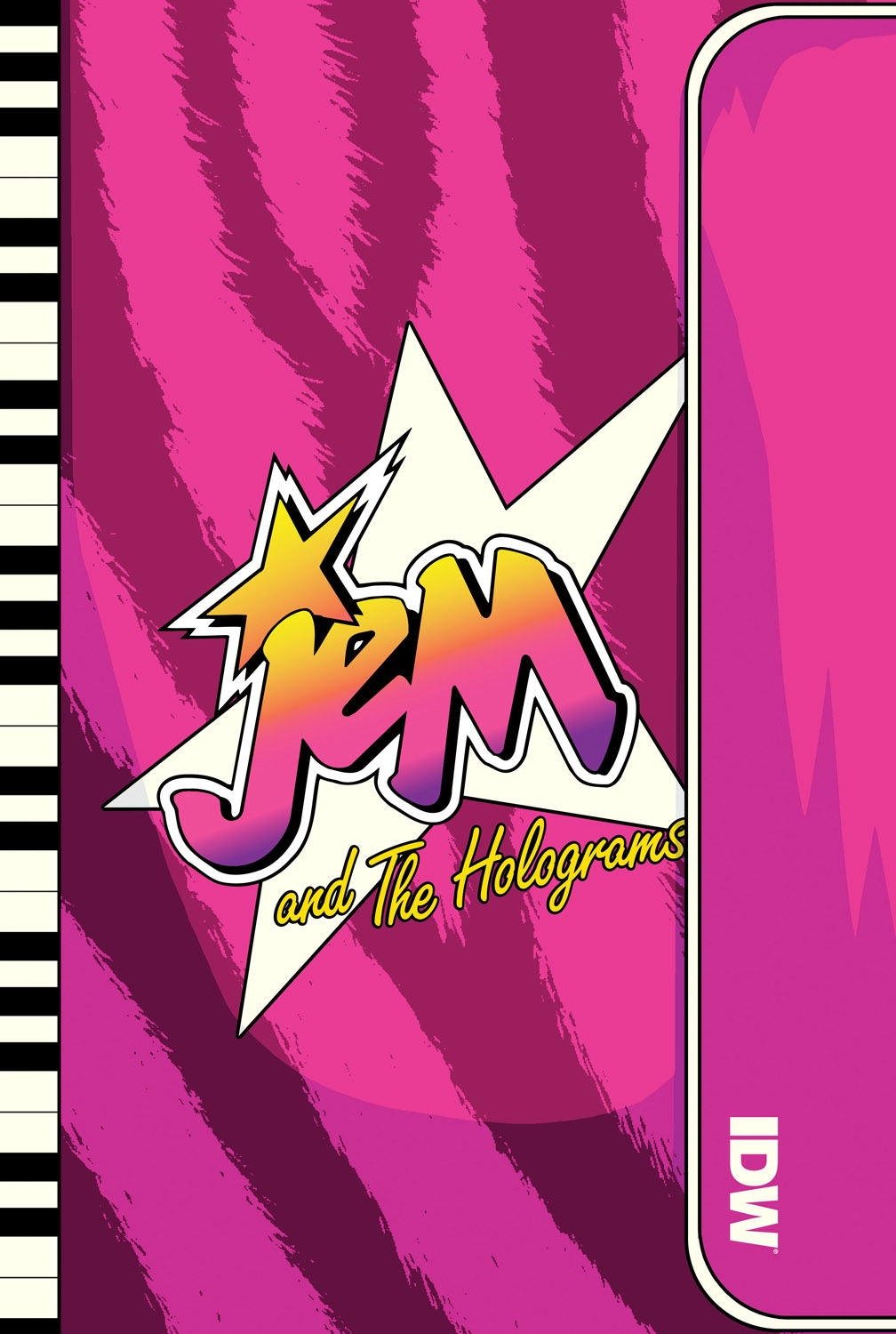 Jem and the Holograms: Outrageous Edition

Collects Jem and the Holograms #1-10, the double-length Annual, the Holiday Special, and the Valentine Special. 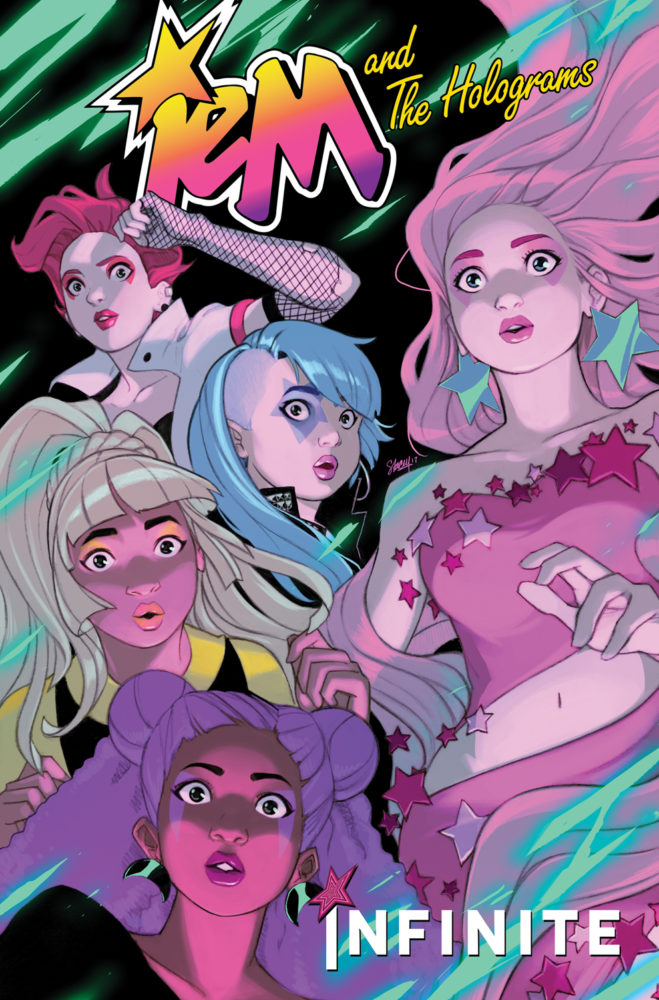 Jem and the Holograms: Infinite

The FIRST-EVER Jem/Misfits crossover event takes both bands to a whole new world… like, literally! Now a happy quintet, Jem and The Holograms are stronger than ever, which is a good thing because they’re about to embark on an adventure unlike anything they’d ever imagined. After a public fight with The Misfits at a charity event, a strangely dressed Techrat shows up and takes them on a strange journey, a journey that is going to change EVERYTHING.