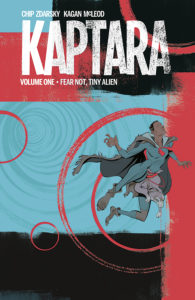 Keith Kanga crash lands on KAPTARA, a world filled with danger and weird danger and dangerous weirdos! And if he can’t survive, then Earth, the place where YOU live, is doomed!

There has not yet been any news of a second volume.

“Described by series creator Chip Zdarsky as “gay Saga” (a reference to Image’s acclaimed sci-fi epic by Fiona Staples and Brian K. Vaughan), Kaptara #1 introduces us to the doomed crew of the Kanga, a star-faring vessel sucked into a deep space anomaly only to crash on the planet the titular planet. A strange world with weird, semi-medieval elements and futurisms seemingly at home in a lost Final Fantasy map, Kaptara is a world full of wondrous fauna, mysterious flora and a kingdom ruled by a queen with no ear for sarcasm. And as we quickly learn, our focus this debut issue isn’t so much centered around seeing what sites this new kingdom has to offer, but rather around what protagonist Keith Kanga can gain simply from being a stranger in a strange land.

With that in mind, Kaptara owes much to the sarcastic voice offered by Zdarsky. Known in comics for his outlandish humor in Sex Criminals and Howard the Duck, Zdarsky utilizes a voice steeped more in cynicism than whimsical gags. This book still provokes laughter, but it’s more serious than it isn’t; Zdarsky writes Keith as the eternal outlier to a group of people ostensibly more suited for space travel and exploratory missions, and where others offer discernible skills and knowledge, Keith offers put downs and witticisms.” (Source: Paste)

“A space exploration mission with a grab bag of personality types for a crew (muscle head, no-nonsense tech, pretty-boy pilot) crash lands on a planet of oddities in this start to a new series from Zdarsky (Sex Criminals) and McLeod (Infinite Kung Fu). The story plants Keith, the crew’s sarcastic loudmouth, into the middle of Endom, an alien civilization that gets odder by the page. Endom’s rulers are concerned that Skullthor of the Dark Boroughs has been sent to conquer Earth when they want him back to face justice. So off Keith goes with preening blowhard Endomian prince Dartor to save Earth. Along the way, they encounter a Frank L. Baum–like menagerie of curiosities, from a two-legged orb whose surface broadcasts self-help bromides to a race of tiny racist Tea Party trolls. Zdarsky and McLeod pack the pages with off-kilter action, but the cartoonish style is the wrong fit for this adventurous but wildly uneven John Carter of Mars/John Waters SF comedy mash-up.” (Source: Publishers Weekly) 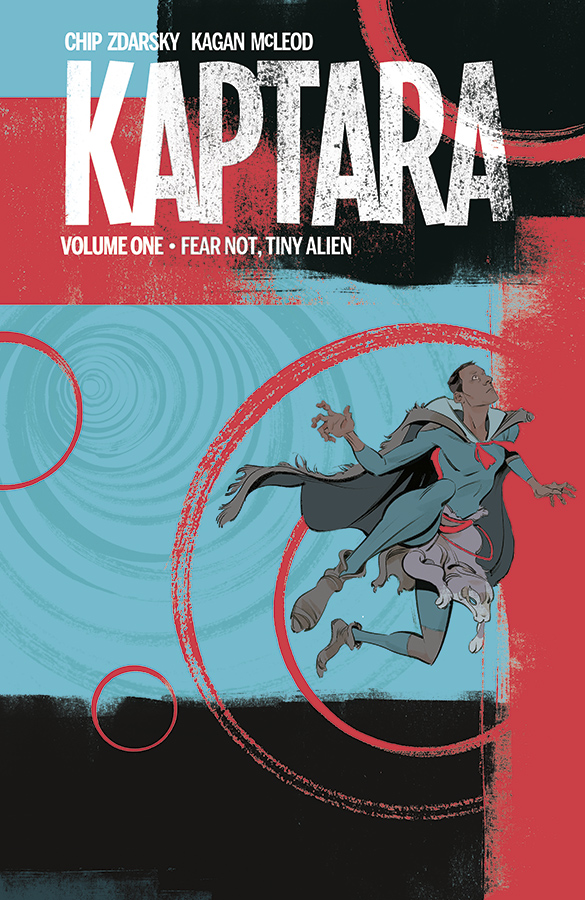 Keith Kanga crash lands on KAPTARA, a world filled with danger and weird danger and dangerous weirdos! And if he can’t survive, then Earth, the place where YOU live, is doomed!