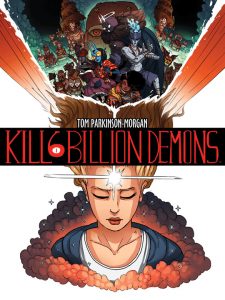 Allison Ruth planned on losing her virginity to her boyfriend. She didn’t plan on having a mystical key jammed into her forehead, or on being dragged into conflict with angels, demons, and the seven megalomaniacal sovereigns of the multiverse. Now she must master newfound abilities while navigating cruel and treacherous surroundings.

This series depicts frequent and extreme violence and gore. Sexual situations, including sexual slavery, are depicted.

One of the focal characters is an angel whose identity regarding gender may not map clearly into a real world identity. Angels use he / him pronouns, but are referred to as genderless, while this character self-identifies as “feminine” and uses she / her pronouns.

This series was initially published online for free, but later collected in print by Image Comics.

“The conflicts of Kill 6 Billion Demons are on a huge scale, and everything in the comic feels appropriately big. This is accomplished by Parkinson-Morgan’s art. Parkinson-Morgan creates amazing establishing shots of massive alien landscapes. Huge structures feel huge, and each setting is populated with large crowds of diverse and interesting creatures. There are no generic character designs here. Every time the characters enter a new, crowded area it feels like going into Mos Eisley’s Cantina. What makes that scene in A New Hope so memorable and fantastic is the joy of possibility – all these strange people look interesting, even though we don’t know (and will probably never know) anything about them. Parkinson-Morgan captures that sense with amazingly cool looking tertiary characters. I would read a whole comic about the gun-witch bounty hunter that shows up every once in a while, and she’s only had about three lines.” (Source: Comics Beat)

“It’s a vision of the entire universe as a savage free-for-all of slaughter and horror, where the strong prey on, enslave, and violate the weak, and as such it’s probably the most bleak setting I’ve ever seen. It’s completely blasé about things like sex slavery in a way that’s disturbing to read, using the wholesale annihilation of women’s agency as set dressing, not something worth addressing in the plot. Several central characters formerly or currently eat living humans! Allison’s personal arc is one of wading out into that sea of blood and finding her place in it, and it’s not yet clear if the story will present her rise to power as a triumph or a tragedy.” (Source: Yes Homo) 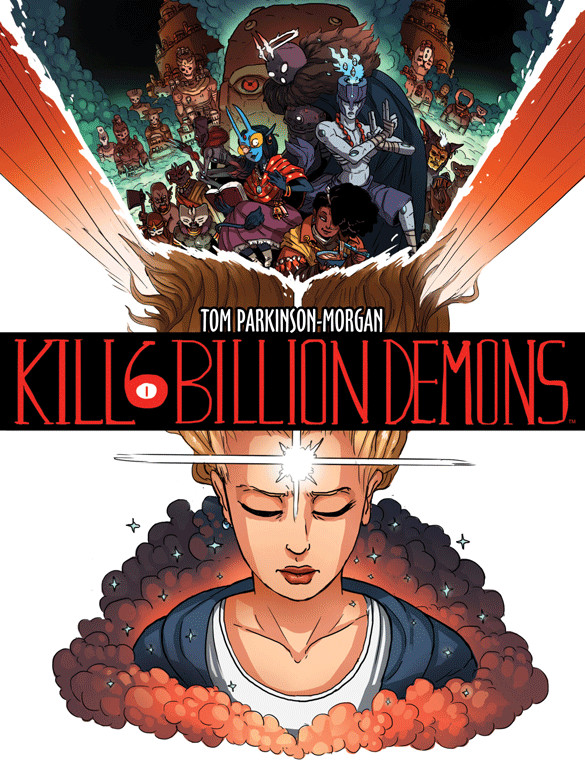 In this collection of the first story arc of the popular webcomic Kill Six Billion Demons, sorority sister Allison Ruth must travel to Throne, the ancient city at the center of the multiverse, in an epic bid to save her boyfriend from the clutches of the seven evil kings that rule creation. Includes excerpts from in-universe religious texts, stories, and more. 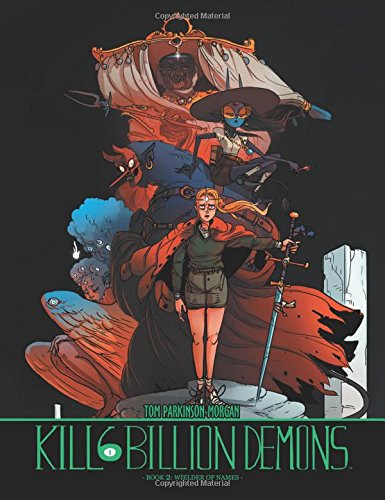 In this collection of the second major arc of the popular webcomic KILL SIX BILLION DEMONS, woefully out-of-place sorority sister Allison Ruth and angelic lawman “82 White Chain” must struggle against their own fears in a fateful clash with one of the seven evil masters of creation. In this collection of the third chapter of the popular webcomic KILL SIX BILLION DEMONS, sorority sister and possible inheritor to the universe Allison Ruth must battle her way to the depths of an infinite treasure fortress in search of a long-lost friend, confronting not only the dark, criminal past of her closest companion, but also the depths of her own inner lust for power.