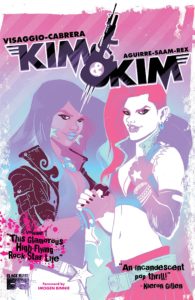 Kim & Kim are twentysomething besties out to make a name for themselves in the wild world of interdimensional cowboy law enforcement. In a massive “screw you” to their parents and the authorities, they decide to hijack some high stakes bounty — and end up in way over their heads. Kim & Kim is a day-glo action adventure that’s bursting with energy and enthusiasm. It puts queer women and trans women front and center, with a story that embraces the absurd alongside realistic pathos.

Blending the punk exuberance of TANK GIRL with the buddy adventure wackiness of SUPERBAD (if Michael Cera was a trans woman and Jonah Hill a queergirl partner in crime), Kim & Kim focuses on the power and meaning of female friendships as engines of validation. A bright, happy, punk rock sci fi adventure that is queer as shit.

Kim & Kim was serialized as two mini-series, Kim & Kim and Kim & Kim: Love on the Battlefield, followed by a third series, Oh S#!t It’s Kim & Kim, which began in June 2018 and is an ongoing (no predetermined number of issues, typically more than 12).

“A cocktail made with two parts Tank Girl, one part Jem and the Holograms, and a splash of Lumberjanes-esque friendship, Kim & Kim from Black Mask Studios may be the funnest comic book of the summer. The story follows Kim D and Kim Q, a pair of planet hopping punk rock bounty hunters. Issue #1 introduces us to the Kims while they’re low on cash and decide to go after a huge payout. Their mission is complicated by the fact that they are trying to beat another team (Columbus and Saar) to the bounty. Saar and Kim Q have a complicated past, in part because they both worked with her estranged father.

Even though the Kims are on a wild interplanetary adventure, they’re also just two badass ladies trying to make enough money to buy a couple drinks and fill their gas tank. Just like the rest of us, they’re trying to get by and figure it all out. The back-and-forth between the Kims sounds like it could be any two friends laughing with (and at) each other. In one of my favorite lines from issue #1, Kim Q describes a bounty they’re pursuing “for a reward large enough to keep us in horror comics and boozemohol for five years.” Way to nail what we’re all looking for in a paycheck, Kim.” (Source: The Mary Sue)

Comics Alliance: “I Wanted to Do a Buddy Story: Magdalene Visaggio Talks Friendship, Worldbuilding and Identity in ‘Kim & Kim'” 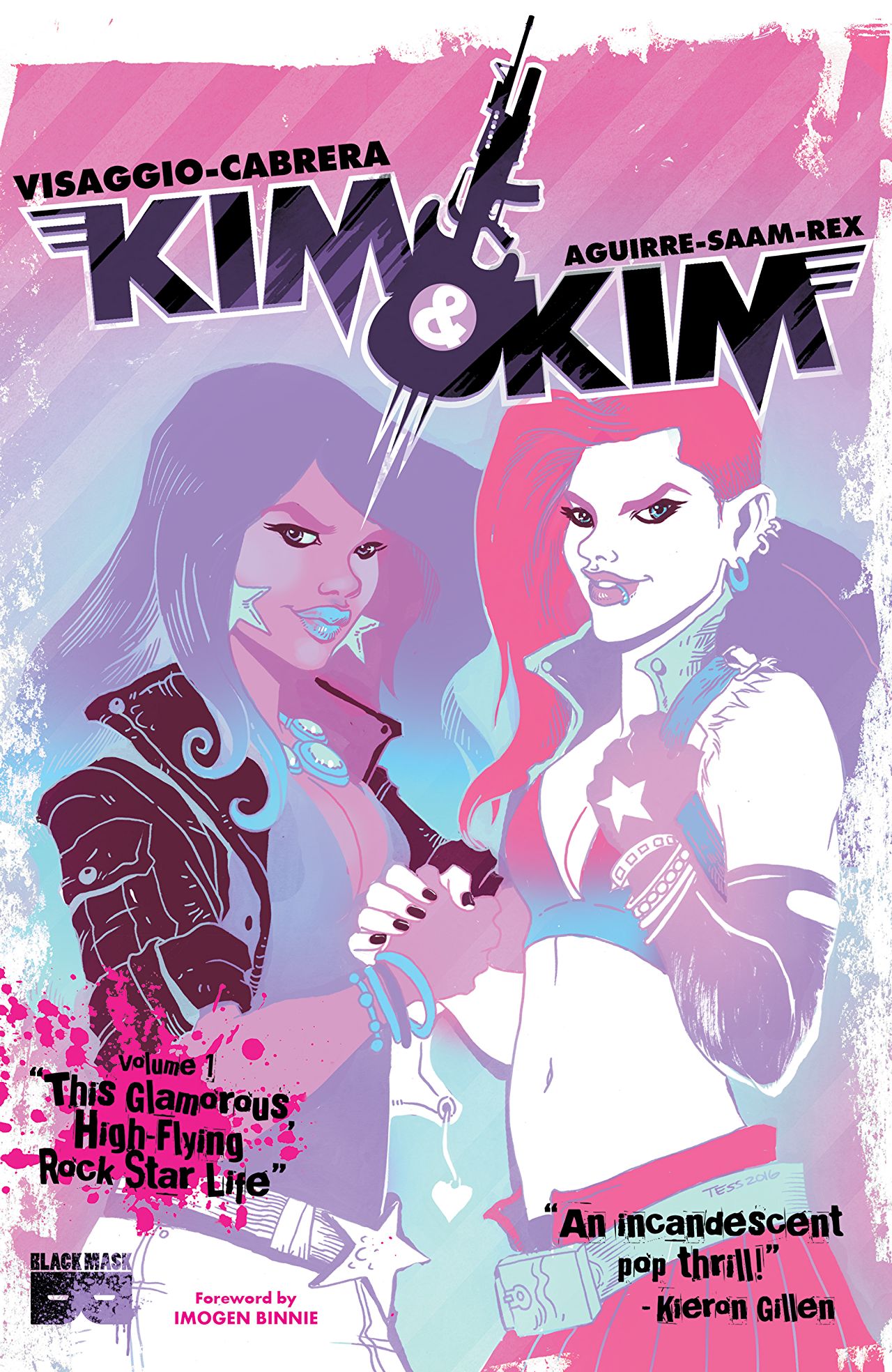 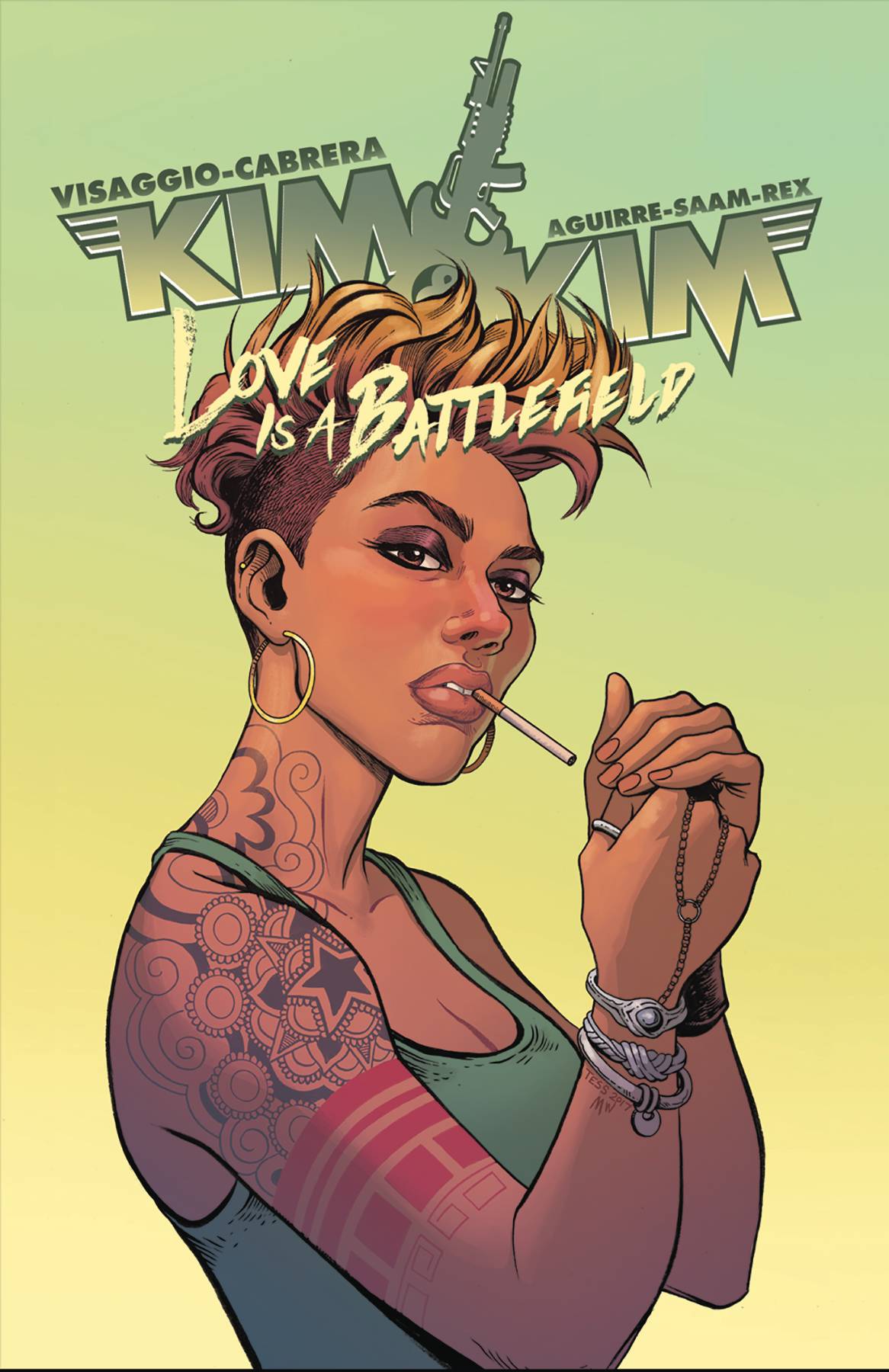 Collects issues 1-4 of Kim & Kim: Love is a Battlefield, plus four essays by trans writers Elle Collins, Natalie Reed, Nyri A. Bakkalian, and Sam Riedel that were included as backmatter in the single issues.

The Fighting Kims finally get the bounty of their lives and Kim D reconnects with an ex-girlfriend, so of course everything immediately goes catastrophically wrong. This high-flying, rad af tale of exes and woes is the first in a four-part follow-up to 2016’s Eisner-nominated favorite. Awesome.