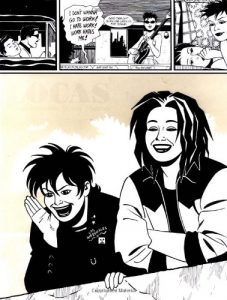 A mosaic of stories depicting the lives of Maggie Chascarrillo and Hopey Glass, two free-spirited women who continually challenge the world around them and each other.

Although the world of this story contains superheroes and aspects of science focus is on the personal lives of the main characters, almost to the exclusion of these genre elements.

Locas was initially published alongside The Heartbreak Soup Stories, a series created by Jaime’s brother Gilbert Hernandez, under the title Love and Rockets. While there is crossover between these series, they can be read separately. Locas was later published independently, in two omnibuses, one in 2004 and the other in 2009. Several of the “Love and Rockets Library” collections also reprint Locas stories.

There are additional series which follow characters established in this series, including Love and Rockets: New Stories.

Starred Review: “Hernandez’s main characters are Maggie and Hopey, two adorable lesbian rockers who start out in a somewhat vague relationship and are then are separated by adventures both grand and demeaning. Maggie is a magnificent comics character, a tempestuous naïf who wears her heart on her sleeve when she’s not throwing it at a succession of bad boys who ignore her, even though Hopey is secretly the love of Maggie’s life. Hopey, a mohawked imp, is more opaque, a symbol of the youthful rebellion of punk rock that all the characters are trying to return to in some way, even as real life sweeps them further away from their dreams. Maggie’s weight gain over the years sends her self-esteem on a downward spiral, while Hopey goes on an endless tour with a band. Along the way, Hernandez gradually peels away the strip’s early sci-fi trappings (dinosaurs and rocket ships) to create a devastatingly naturalistic world. Sharp b&w drawings capture the characters in minute detail with a wide range of emotions.” (Source: Publishers Weekly)

“Maggie Chascarillo, known also variously to friends and family – and confusingly to readers – as Margarita, the Magpie, Perla, Perlita and the Shrimp, starts out in the comic series as something called a “pro-solar mechanic”, which means she works on space-rockets. The first few stories, “Mechanics”, “Hey Hopey” and “Maggie Vs Maniakk”, feature quite a bit of rocket-science and super-hero shenanigans, which is OK, but was hardly ever going to set the comic world on fire, but fortunately the sub-Marvel and DC comic-style stuff soon disappeared, with Hernandez focusing increasingly on the complex relationships between Maggie and her friends, including Vicki Glori (an ageing women’s wrestling champ), Isabel Maria Ortiz Ruebens (a witchy looking chain-smoking goth), Penny Century (a platinum-blonde heiress) and Maggie’s occasional lover, Hope (full name Esperanza Letitia Glass, half-Colombian, half-Scottish, and a bass-guitarist in a punk band), as they try to make their way in the world in Hoppers, a barrio outside Los Angeles apparently based on the Hernandez brothers’ own home town of Oxnard, California.” (Source: The Guardian)

Hazlitt: ““If it’s real life you don’t need to apologize for it”—An Interview with Jaime Hernandez“

Locas: The Maggie and Hopey Stories

Collects Maggie and Hopey stories from the first twenty years of Love and Rockets. 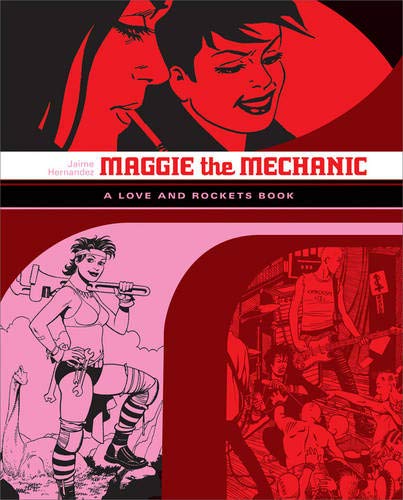 The 25th anniversary Love and Rockets celebration continues with this, the first of three volumes collecting the adventures of the spunky Maggie, her annoying best friend and sometimes lover Hopey, and their circle of friends, including their bombshell friend Penny Century, Maggie’s weirdo mentor Izzy — as well as the wrestler Rena Titañon and Maggie’s handsome love interest, Rand Race. 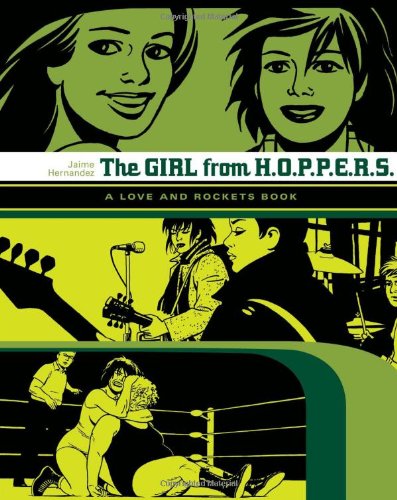 After the sci-fi trappings of his earliest stories (as seen in Maggie the Mechanic, the first volume in this series), Hernandez refined his approach, settling on the more naturalistic environment of the fictional Los Angeles barrio, Hoppers, and the lives of the young Mexican-Americans and punk rockers who live there. A central story and one of Jaime’s absolute peaks is “The Death of Speedy.” Also in this volume, Maggie begins her on-again off-again romance with Ray D., leading to friction and an eventual separation from Hopey. 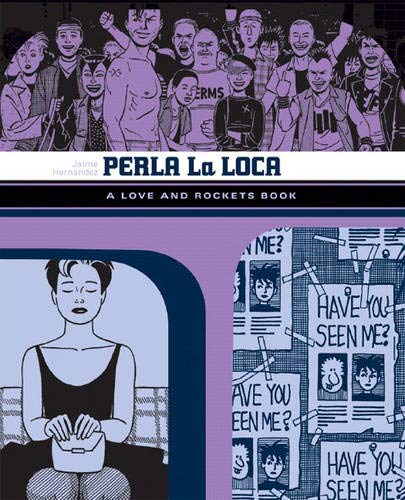 Perla begins with the “Wigwam Bam” story, arguably Jaime Hernandez’s definitive statement on the post-punk culture. As Maggie, Hopey, and the rest of the Locas prowl Los Angeles, the East Coast, and parts in between trying to recapture the carefree spirit of those early days. “Wigwam Bam” brings us up to date on all the members of Jaime’s extensive cast of characters and then drops a narrative bomb on Hopey (and us) in the very last pages. Split up from Hopey yet again, Maggie bounces back and forth between a one-laundromat town in Texas (the “Chester Square” that serves as the title of two of the strongest stories in the book), where she has to contend with both her own inner demons and a murderous hooker, and Camp Vicki, where she has to fend off her aunt Vicki’s attempts to make her a professional wrestler and the unwanted advances of the amorous wrestling champ-to-be, Gina. As usual, Jaime spotlights a wide range of headstrong female characters. And what’s this about Maggie getting married? 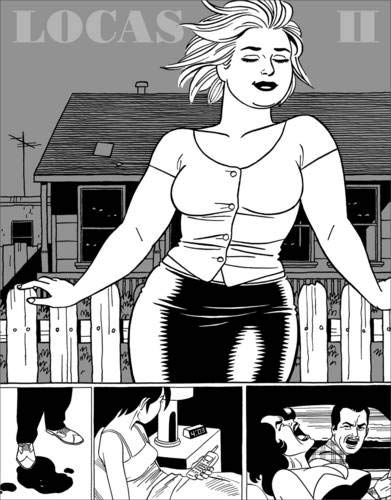 In this second big omnibus collection of his ongoing tales of the Locas, Jaime Hernandez continues telling stories featuring his main characters Maggie, Hopey and Ray. This volume picks up shortly after Maggie and Hopey’s long-awaited reunion at the end of the first Locas. 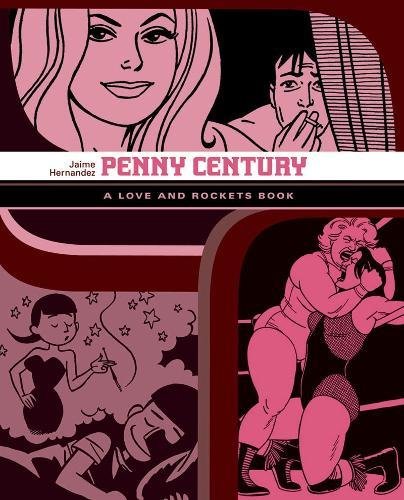 Penny Century starts off with a blast with “Whoa, Nellie!”, a unique graphic novelette in which Maggie, who has settled in with her pro-wrestler aunt for a while, experiences that wild and woolly world firsthand. Then it’s back “to chills and spills with the old cast of Hopey, Ray Dominguez, and Izzy Ortiz — including Maggie’s romantic dream fantasia “The Race” and the definitive Ray story, “Everybody Loves Me, Baby.”

Penny Century also features two major flashback stories: “Bay of Threes” finally reveals the full back story behind Beatriz “Penny Century” Garcia, Maggie’s long-time, bleached-blonde bombshell friend (who gives this volume its name), while “Home School” is one of Hernandez’s popular looks at his characters lives from when they were little kids, drawn in an adorable simplified Dennis the Menace type style. This volume also includes the Maggie & Hopey Color Fun one-shot, reproduced here in glorious black and white. 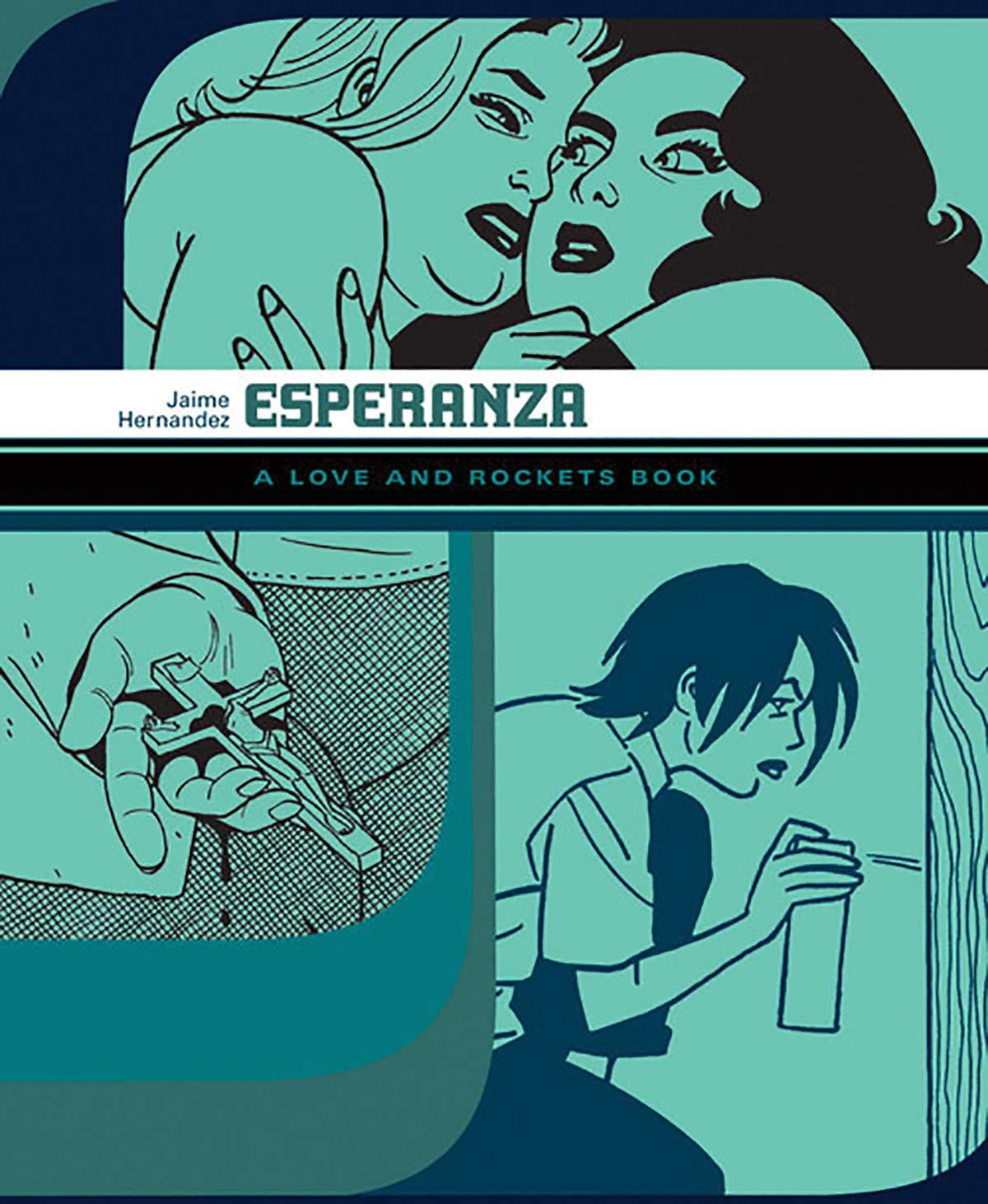 Taking its title from Hopey Glass’s birth name, Esperanza follows the somewhat settled-down ex-punkette in her new life as a schoolteacher’s assistant which doesn’t mean that her romantic travails have gotten any simpler. Speaking of romantic travails, Maggie’s former squeeze Ray Dominguez meets, and becomes obsessed with, the unhinged but fiendishly sexy “Frogmouth,” even as he becomes peripherally involved in a brutal murder. But the longest story in the collection focuses on an older and wiser Maggie, facing down her demons in a cataclysmically eventful return to Hoppers.