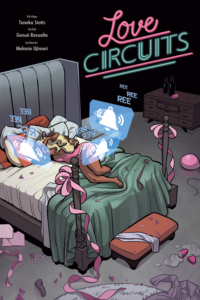 When Yvonne King receives a refurbished Heartbreaker-model robot for her birthday, she’s unprepared for the impact he’ll have on her life. Set in the futuristic city of Nuevo Miami, Love Circuits is queer, upbeat, inclusive science fiction.

The site for this comic last updated in September 2017.

“Love Circuits is still a relatively new project, launched in February of 2017, so that’s about as much of the story we know, for now. However, Revuelta and Stotts have been doing a wonderful job of enticing the reader with fun surprises on every page update. Revuelta’s art is slick but inviting, rendering both the organic and metallic bodies of her characters with equal spirit and vivacity. I love the way Yvonne’s thick two-toned hair bounces and the grace with which she carries her rounded, technologically augmented body (even when hungover), just as much as I’m charmed by Lucos’s dancer-like articulated poses, which serve to underscore his bubbly personality as much as his sleek robot-ness. I may be a bit biased toward bright colors, but Revuelta’s coloring feels beautifully balanced. The warm tones of Yvonne’s and her friends’ brown bodies and tasteful contemporary fashions contrast very appealingly with the coolness of Lucos’s purplish build. Meanwhile, the fun splashes of pink and blue lending a neon glow to many a page remind us that we are somewhere in a perhaps not-too-distant future.” (Source: POMEmag)

“Yvonne had one helluva birthday party. She wakes the morning after to a disaster of an apartment and the unexpected delivery of a refurbished Heartbreaker android. The ‘droid, named Lucos, is a belated gift from her good friend Frankie. Lucos and Yvonne’s android service dog, Beau, don’t exactly get along, and making things even more complicated is the arrival of Yvonne’s ex, Javier. Mediocre lettering is common amongst most webcomics. It’s one of those technical skills often overlooked when done well and very noticeable when done poorly. Letterer Melanie Ujimori isn’t just a professional, she’s a damn good one. Of all the titles on this list this is the most traditional, in that it’s structured, colored, lettered, and paneled like something you’d find in the BOOM! Box line. Between her easy-to-follow lettering, Revuelta’s lovely art, and Stotts’ intriguing story, Love Circuits is a damn fine series.” (Source: Tor.com)

Nerds of Prey: “Behind the Ink: Taneka Stotts and Genué Revuelta”