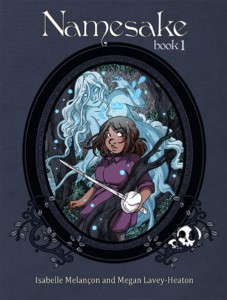 Emma Crewe doesn’t care for books, but has the power to literally be lost in one.

When Emma lands in another world following a library fire, she discovers she’s a Namesake — one with the power to open portals to other worlds via the power of their name: strange, fantasy, and fairy-tale lands we know thanks to literature, cinema, and folks tales. The rules of Namesakes are quite clear – Alices always go to Wonderland. Wendys always go to Neverland. However, Emma finds herself in Oz, where she is expected to act as the latest in a long line of Dorothies. She instead unveils a magical conspiracy plot that’s more than 100 years in the making.

While Emma is stumbling down the Yellow Brick Road, her younger sister Elaine discovers she’s a Writer — one gifted with the power to make stories come to life. Will Elaine be her sister’s key back home?

Aided by magic-wielding twins from Oz, a half-Cheshire Alice, a devilishly charming Jack, a sword-wielding Lost Girl, a hungry card soldier, and a confused Canadian, Emma must walk through many stories to find everyone’s happy ending.

The creators confirmed the gender and sexual orientations of a number of characters in a one-off page.

Warrick Chopper, one of the series’ main characters, is demisexual and bisexual, while the Djinn, a supporting character, is asexual. This series does not feature aromantic representation.

“Emma Crewe, a young woman from Toronto who doesn’t read, or watch TV, or even have the internet at home, discovers she is a Namesake, a person who can magically travel to other worlds based on their name. These worlds are familiar to us through fairy tales, literature, film, and other media, but the worlds are real, in parallel universes. Namesakes are protagonists in the stories of these worlds, and the rules are pretty strict — each world gets a particular name. Wendys go to Neverland, while Alices visit Wonderland. Emma, however, winds up in Oz, instead of the expected Dorothy, due to an accident with a librarian, an arsonist, and a pair of red shoes.

The level of world building and detail isn’t something you always find in a webcomic; it’s very clear that Lavey-Heaton and Melançon did a ton of planning before starting Namesake. Lots of research too — Namesake weaves in other stories we know, such as Alice in Wonderland and The Wizard of Oz, in very deft and exciting ways. It’s a comic for big book nerds, and it’s delightful. Melançon does fantastic work with the art. Her faces are stunningly expressive; when Elaine gets angry you can feel the pre-teen rage. The color work is very smart; when Emma first lands in Oz, everything is black and white except for her purple blouse and the yellow brick road. Back in Toronto, her sister and friend interrogate Jack, who’s sporting a bloody red hand. It’s minimal, but very powerful.” (Source: ComicsAlliance)

“The plot is thick, convoluted, and frankly a bit confusing at times, but the comic is carried by the characters, as depicted by vibrant linework and captivating dialogue that Meg and Isa churn out. I have a lot of lingering questions, especially about what the deal with Writers is, and I’ve even noticed a plot hole or two, but in a story with so many moving parts, you’re probably gonna grind gears every now and then. The important thing is that everything keeps moving forward, and it does.

If you’ve ever revisited a kids’ book as an adult and thought “wow, I forgot how dark this was”, Namesake is the comic equivalent of that, and captures that exact feeling exceptionally well. And if you’ve done that and thought “I forgot how much I loved these characters”, well, Namesake’s got you covered there too.” (Source: Yes Homo) 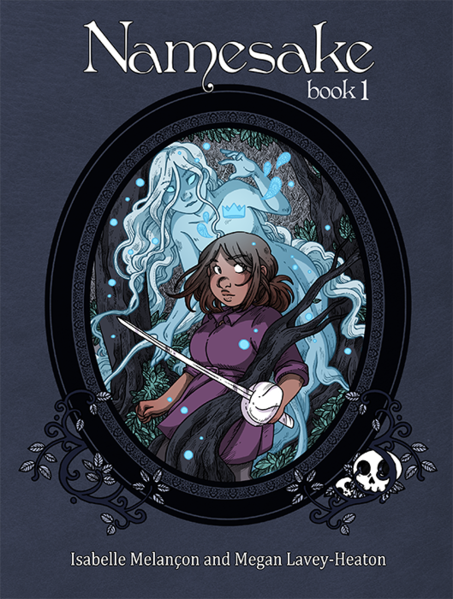 Namesake is the story of Emma Crewe, a woman who is stolen in the aftermath of a library fire and is dumped in a land made famous by literature and cinema. She learns she’s a Namesake, uniquely connected to this world by the power of her given name, and now she must act as the story’s protagonist as she figures out how to make her way home. But as Emma travels, she discovers that those controlling her story have their own selfish goals in mind — and her fate is the key to everyone’s happy ending.

This volume collects the prologue and first five chapters of the fantasy webcomic. 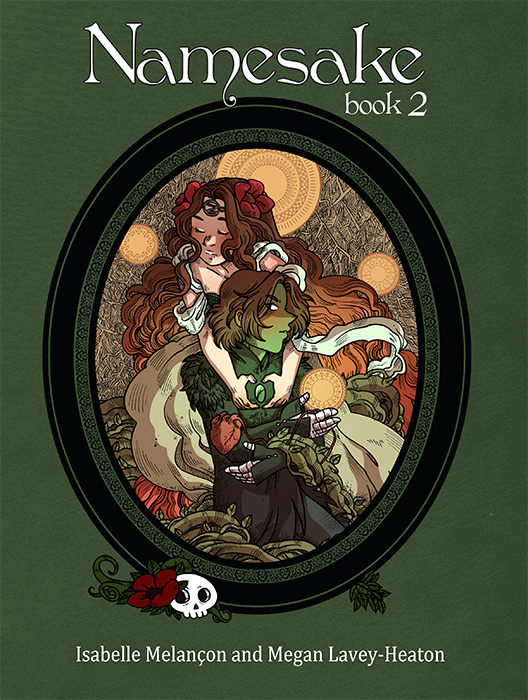 As Emma Crewe continues her journey in Oz, she uncovers a story as entangled as the enchanted vines she is fighting — of love, loss, and the lengths that people will go to protect their family. As she, Warrick, Agha, Hercilia, and the Scarecrow get closer to unraveling the mystery behind Ozma.

This volume contains Intermission #1, chapter 6-10 of the fantasy webcomic and a book-exclusive story. 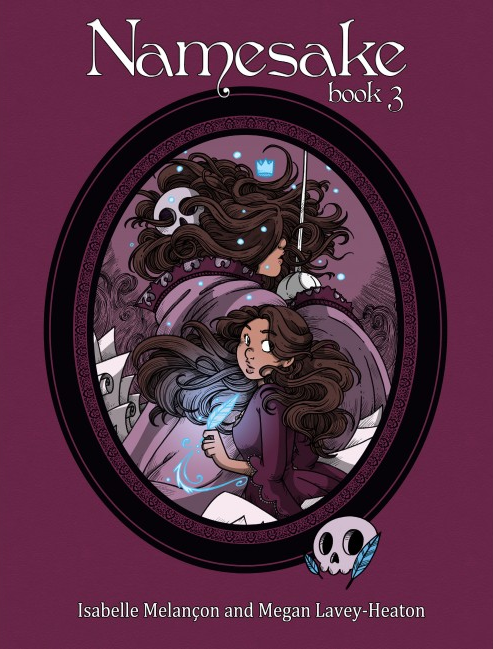 Emma Crewe has returned home from Oz, but rather than finding her sister, she winds up in the clutches of a group calling themselves the Rippers, who seem to know a lot about her powers. One peculiar Ripper named Nose seems to even have childhood memories with Emma. Meanwhile, Elaine and Calliope are on a quest to reconnect with Emma, and in Oz, Warrick, Selva, and their friends deal with the aftermath of finding Princess Ozma.

This volume contains Intermission #2, chapters 11-15 of the fantasy webcomic, and a book-exclusive story.