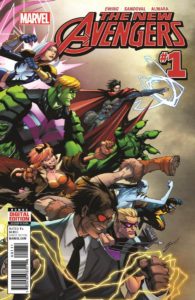 EVERYTHING IS NEW. In the wake of SECRET WARS, the old order changeth – and Bobby DaCosta, Sunspot, is just the man to changeth it. Welcome to AVENGERS IDEA MECHANICS — a super-scientific global rescue squad of tomorrow’s heroes…today! America doesn’t want them! S.H.I.E.L.D. doesn’t know what to do with them! But Earth might not survive without…the NEW AVENGERS!

This is the 2015 series. Marvel Comics has published three previous series titled New Avengers. Gay male characters Teddy Altman and Billy Kaplan were first introduced in Young Avengers (2005). This is the first appearance of lesbian or bisexual/pansexual characters Toni Ho and Aikku Jokinen. Gerardo Sandoval is the main artist on the series, with several guest artists contributing. This series continues as U.S. Avengers.

“This series picks up one thread from Jonathan Hickman’s Avengers run by exploring Sunspot’s takeover of A.I.M. The organization has now gone legit and become “Avengers Idea Mechanics” – a privately funded super-team based on its own island and outside the jurisdiction of both Steve Rogers and S.H.I.E.L.D. In a way, that idea of this team being the renegade, underground version of the Avengers brings the New Avengers concept back to its roots.” (Source: IGN)

“One of the problems with sliding timescales is that older characters never really fall by the wayside, and so it becomes harder for newer ones to find a foothold in the minds of both older and newer readers. As new readers come in, they will be reading almost exclusively about the same heroes as generations past. In many ways, New Avengers #1 seems to be addressing that issue, using a vivid art style and a good amount of humor to introduce its youthful cast.

The New Avengers #1 launches out of an iteration of the Avengers that was introduced towards the end of Jonathan Hickman’s run on both Avengers and New Avengers. Namely, this is a team operated by Roberto da Costa, aka Sunspot, and whose mission is a global one. Ewing deftly uses captions to get the exposition out of the way as well as providing readers with a quick idea as to the characters’ abilities. This leaves the characters free from carrying huge amounts of expository dialogue and better introduces the reader to who they are as characters. This is an especially young group for an Avengers squad as Ewing pulls Wiccan and Hulkling from Young Avengers and also grabs two of his Mighty Avengers alums, White Tiger and Power Man. In addition, the roster includes Songbird, Squirrel Girl, and Pod, a member of Sunspot’s first Avengers squad.

With the younger cast, Ewing leans heavily into banter between the heroes. They aren’t overly sarcastic, but there’s a general vibe that these are heroes who enjoy what they do. The plot here is simple enough: someone is turning the denizens of Paris into crystal-headed zombies and the Avengers aim to find out who and stop them. But the book is presented in such a lively manner that it stays away from the dour, end-is-nigh feeling that has carried throughout the Avengers line for several years.” (Source: Newsarama) 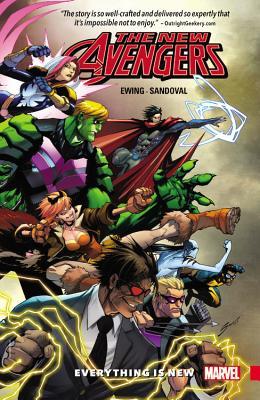 New Avengers, Vol. 1: Everything is New 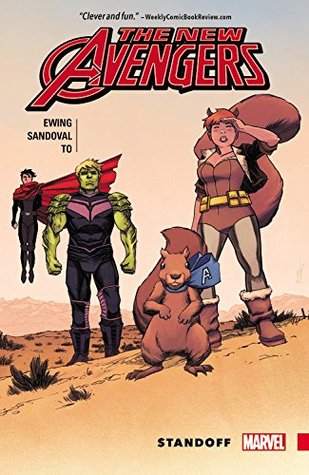 Avengers Idea Mechanics continues to fight the good fight, no matter what! The Maker is back! But what does the strange head of W.H.I.S.P.E.R. want with the White Tiger? And wait, which White Tiger is he targeting? Then, the New Avengers will be drawn into a STANDOFF involving all of Earth’s Mightiest Heroes. They’re a global rescue force, but what happens when they have to rescue someone from the clutches of S.H.I.E.L.D. itself? War is coming – and so is the American Kaiju! Up from the depths! Thirty stories high! He salutes the flag and eats apple pie! But how can Avengers Island possibly survive the ultimate weapon against renegade super-science? Maybe with Avenger Five, the ultimate mighty vehicle! Plus: A traitor is revealed! And so are Sunspot’s secrets, as everything comes tumbling down! Collecting NEW AVENGERS (2015) #7-11.
Rated T+ 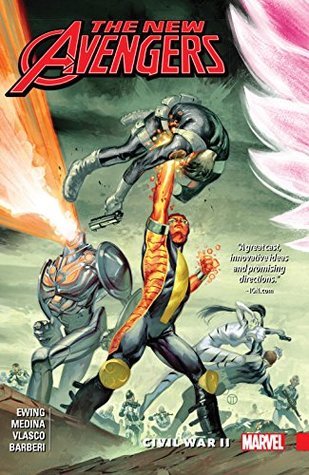 As conflict rages across the Marvel Universe, the New Avengers discover that some Wars are less Civil than others! Roberto Da Costa’s mission – should he choose to accept it – is to play the ultimate secret agents at their own game…with the free world as the stakes! It’s A.I.M. vs. S.H.I.E.L.D.! But as things heat up, the Maker reveals his master plan – and it’s time for the New Revengers to strike! The race is on to see who can take down A.I.M. first. But with everybody else’s hands full, will there be anyone left to stop W.H.I.S.P.E.R. before it’s too late? Also, White Tiger vs. White Tiger: the rematch! Jailbreak at 20,000 feet! And Sunspot’s life on the line! It’s all-out acronym annihilation with A.I.M., S.H.I.E.L.D. and W.H.I.S.P.E.R. – and that spells big trouble for the MU! Collecting NEW AVENGERS (2015) #12-16.
Rated T+