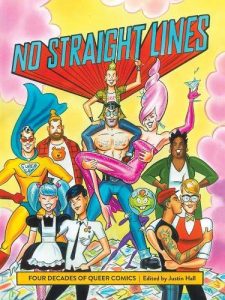 No Straight Lines showcases major names such as Alison Bechdel, Howard Cruse, and Ralf König (one of Europe’s most popular cartoonists), as well as high-profile, crossover creators who have dabbled in LGBT cartooning, like legendary NYC artist David Wojnarowicz and media darling and advice columnist Dan Savage. No Straight Lines also spotlights many talented creators who never made it out of the queer comics ghetto, but produced amazing work that deserves wider attention.

No Straight Lines is an anthology of queer comics from the 1960s to the 2000s. It contains comics and excerpts of comics from a variety of genres.

“In the anthology No Straight Lines, editor Justin Hall has assembled a stylistically and emotionally diverse sampler of underground comics by LGBT creators — the stories we tell ourselves. The worlds revealed in these panels is not, as you might expect, heavily codified and insular, but recognizably, achingly human and universal. From Stonewall and the AIDS crisis to the terrifying specter of domesticity, this clear-eyed, unsentimental collection demonstrates the extent to which, for LGBT people, the personal and the political have always bled together.” (Source: NPR)

“The challenge for any editor compiling an anthology of representative works from queer comics over a 40-year period rests on deciding who the volume is aimed at—the LGBT audience or a much wider one? Editor Hall guns for the latter, but without softening the edges that define the genre, and he’s quite successful. The majority of the works are autobiographical and lean toward humor, though serious topics are addressed—AIDS, coming-out trauma, discrimination—it’s all in here, as well as some cultural info less known outside the gay community, like Robert Kirby and D. Travis Scott’s explanation of the codes and etiquette for sex cruising at a porn shop. Among the stand-outs are Mary Wings’s tale of a lesbian in the 1920s; Howard Cruse’s story about a young gay man remembering the homophobia of his recently deceased uncle; Eric Orner’s memoir of a night in Tel Aviv; Dan Savage’s remembrance of his first time in drag as a child; and Eric Shanower’s eerie fable of teenage experimentation. All of these hit on concerns and experiences that cut to the heart of the human soul, not just the gay one. The section of Allison Bechdel’s work presents the standard for queer comics nowadays, offering humor and observations that draw an outside audience right into the culture.” (Source: Publishers Weekly) 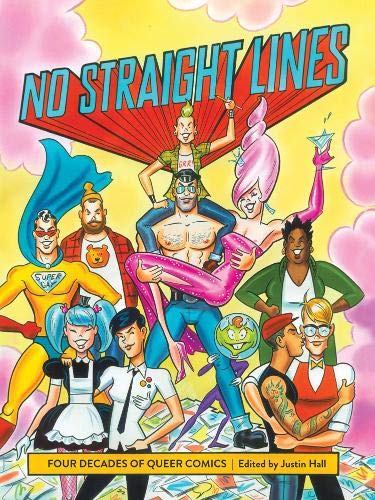