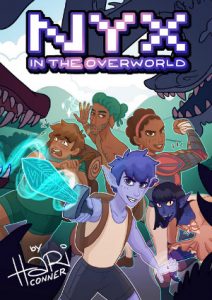 From: Nyx in the Overworld

Some portions of the online version of the series are animated.

A parallel series entitled Finding Home focuses on the relationship between Janek and Chepi, two supporting characters from this series. Finding Home is targeted at an older audience.

“Reading Nyx in the Overworld is an extremely positive experience, especially if you are familiar with RPG games, as action scenes throughout the comic are perceived as though they are taking place in an RPG. Nobody in the comic but the main character Nyx perceives the world through this lens, though, lending itself to an interesting commentary on the genre. There are moments when the RPG aspects allow for some extra humour within the comic which adds another layer of comedy nestled amongst the other jokes.

The character designs of the various fae cast are diverse and intriguing whilst also representing a particular type of character, and the comic is split up into ‘levels’ reinforcing the idea of an RPG. The level title cards are generally beautiful illustrations with detailed backdrops which create a sense of progression within the narrative whilst also providing a break for the reader.” (Source: Broken Frontier) 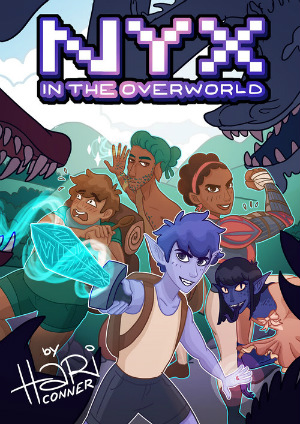 Nyx in the Overworld

Softcover
Available on through the creator’s Etsy.

Collects the complete Nyx in the Overworld.