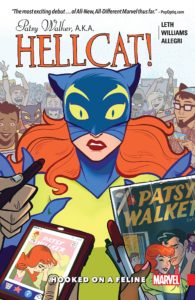 Patsy Walker has managed to escape her past, her enemies and Hell itself (literally) – but nothing compares to job hunting in New York City! Between trying to make rent and dodging bullets, she barely has time to deal with her mother’s exploitative romance comics about Patsy’s past resurfacing, much less how they start to interfere with her work and dating life. As she goes from living a double life to living a triple one, what the Hell is Patsy supposed to do? There’ll be burgers, monsters and rent checks; old friends like Howard the Duck and Valkyrie; and a ghost from the past with questionable motives! Comics’ most flexible heroine has been a provisional Avenger, a Defender, Satan’s daughter-in-law and a dead woman – but she’s never been anything like this!

Most of the series is drawn by Brittney Williams, with issue #6 drawn by Natasha Allegri.

“This is by far the best superhero comic I’ve read since Matt Fraction stopped writing Hawkeye. It’s fun, funny, the action is great, it’s clever and sweet and it’s queer as hell(cat). If you only read one superhero comic that came out in 2016, make it this one.” (Source: Autostraddle)

“The series even deftly touches on Patsy’s bizarre, arcane history as a romance comic star (Patsy as a character has been around since the 1940s.) We see the return of Tom ‘Tubs’ Hale, a character from the original Patsy comics back, as a bear-ish Brooklyn bookstore owner as a prominent supporting cast member. But it also carries on Marvel’s in-universe retcon of those old comics, as a seeming ongoing source of frustration of Patsy. It speaks to Leth’s masterful scripting that AKA Hellcat can be jam packed with callbacks and acknowledgements of Patsy’s long history, but also make them simple and easy enough to digest that any reader just bought into this first issue because they wanted a bright, fun looking comic.” (Source: io9)

“It’s arguably not even that much about superheroes, despite being jam-packed with a whole host of them, but the earnest sense of fun and boundless optimism Kate Leth instils Patsy with is completely charming to read, and Brittney L. Williams and Megan Wilson’s art is candy-coated joy on every page. It’s refreshing and fun and incredibly cute, making it a nice palette cleanser in the current world of superhero comics.” (Source: io9)

“When Patsy falls, She-Hulk’s there to hoist her up and when She-Hulk’s down in the dumps, Patsy pep-talks her back to maximum strength. There are moments between the two of them where you can feel the intimacy leaping off the page and their mutual respect and care for each other makes you feel that way about them. It’s that intense bond between the two of them that made Patsy Walker’s inclusion in Civil War II one of the event’s best issues.” (Source: io9) 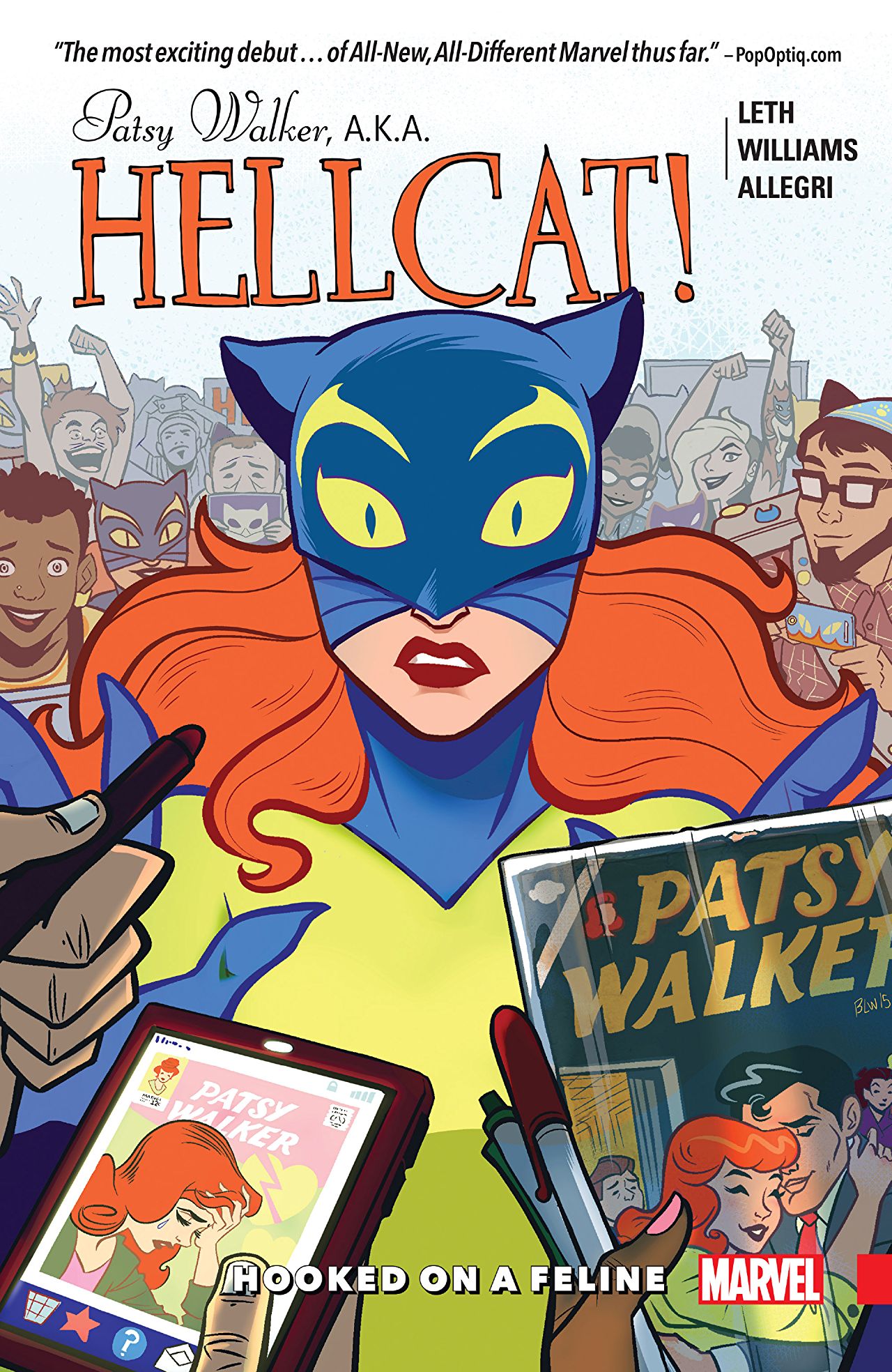 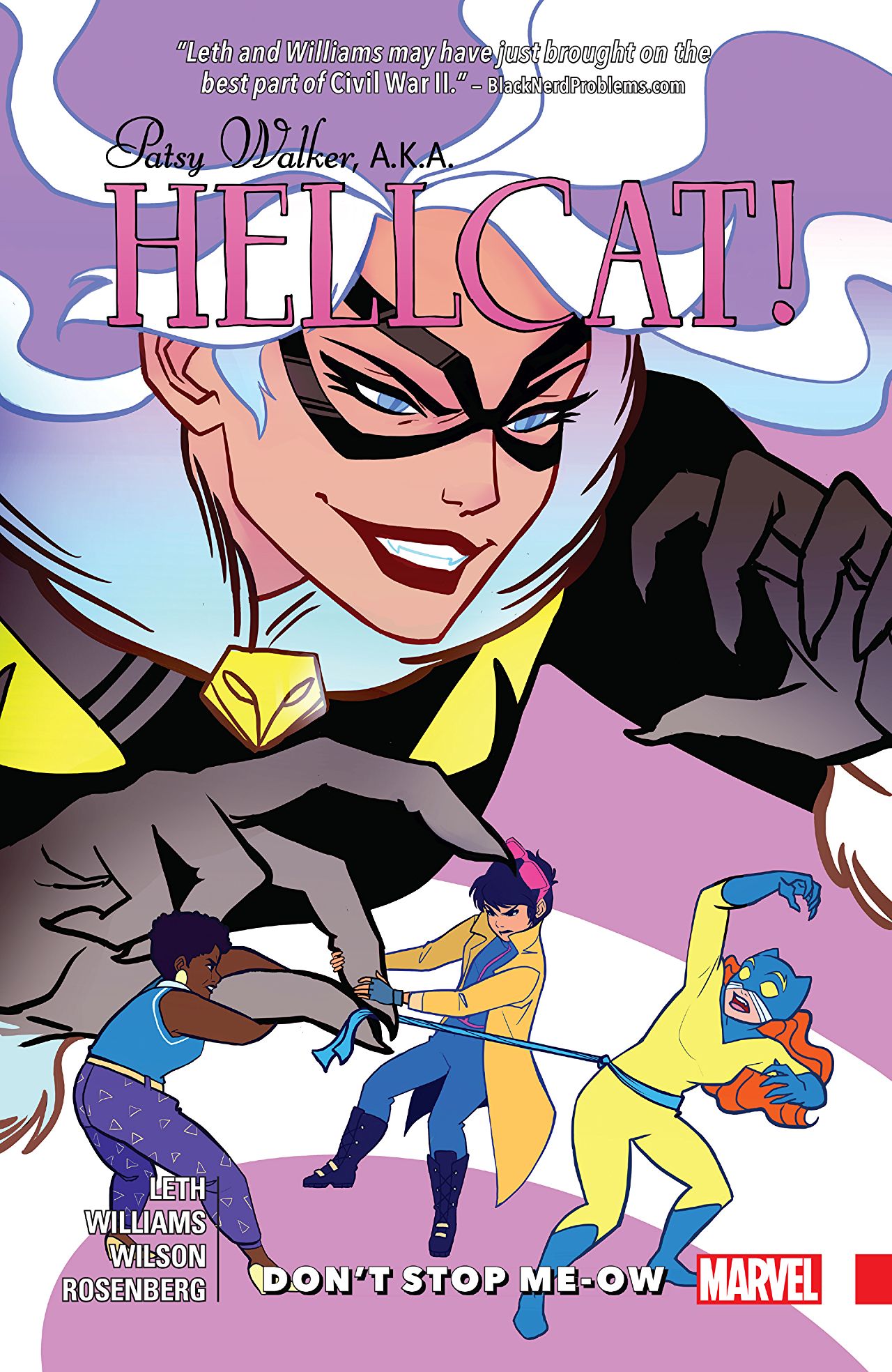 When Patsy Walker meets Jessica Jones, will they be gal pals or best frenemies? Patsy will need all the chums she can get when the fallout from CIVIL WAR II hits close to home – and shows her what it really costs to be a.k.a. Hellcat! Speaking of life’s downsides, Patsy is about to face a reunion with her (literally) evil ex-boyfriends – and nobody does boy trouble like she does! Girls can be a handful, too – like when the villainous Felicia Hardy crosses Patsy’s path for a knockdown, drag-out, no-holds-barred cat-fight! As in Hellcat vs. Black Cat! But everyone’s favorite teenage mutant vampire Jubilee doesn’t have “cat” in her name, so what’s her stake in all this? (Stake, get it?! Because vampire!) It’s claws and fangs at the ready for the ultimate feline feud! Collecting PATSY WALKER, A.K.A. HELLCAT! #7-12. 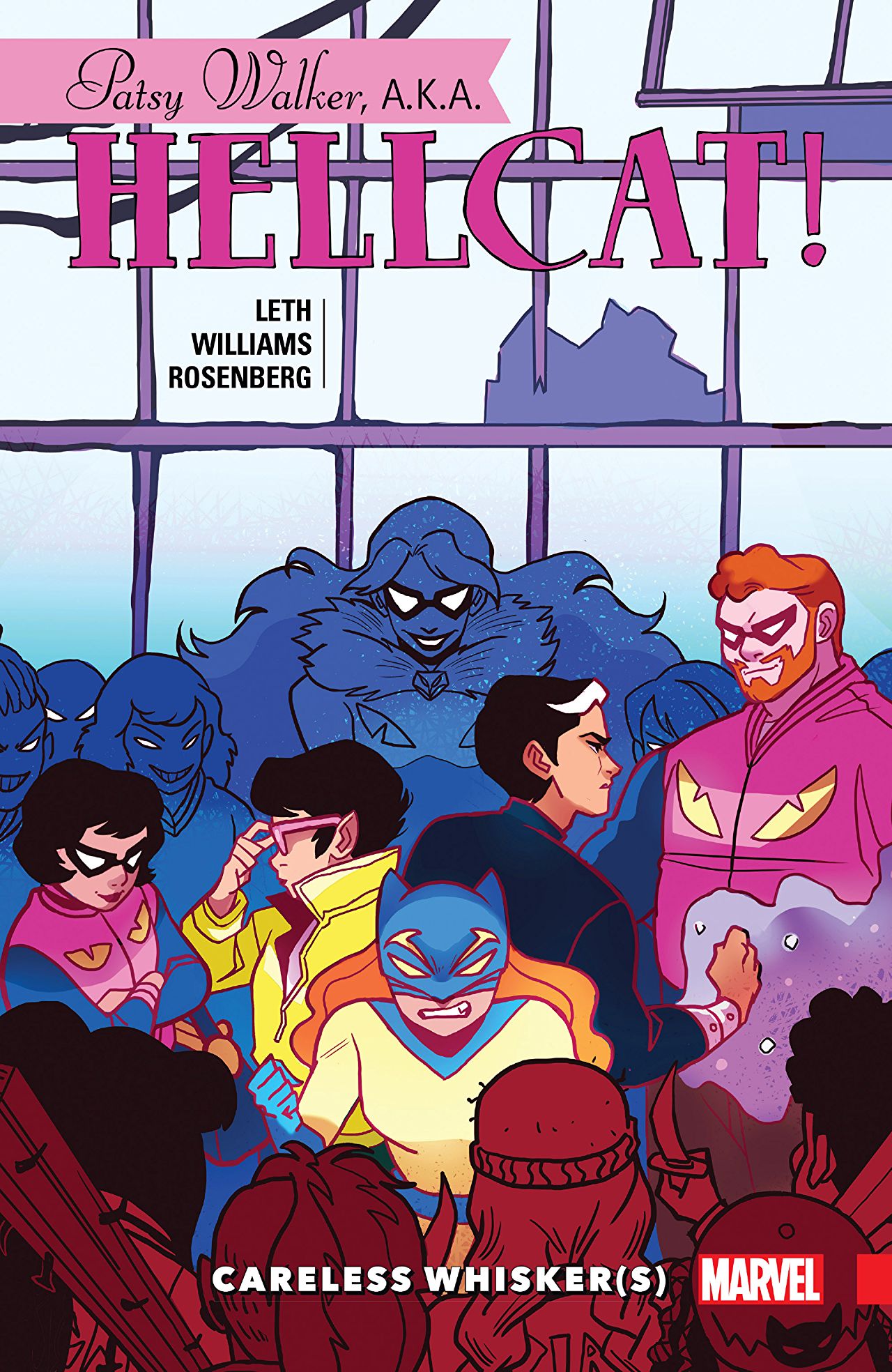 Hellcat has had nothing but bad luck ever since the Black Cat crossed her path. And now that Felicia’s got a whole girl gang in her claws, how can Patsy possibly win this cat fight?! Find out in the big showdown – gato a gato! Then, Patsy will be laid low by sickness – but this is far from a common cold! Is she having fever dreams or living nightmares? As chaos breaks out all over Brooklyn, Hellcat must rely on her nearest and dearest to put out the fires – and make soup! All she wants is to get better and hang out with Jubilee at the mall: swing by the food court, catch a movie, share a fashion montage. Certainly there’d be no fighting villains. What would a villain possibly be doing at the mall? Uh-oh! Collecting PATSY WALKER, A.K.A. HELLCAT! #13-17.