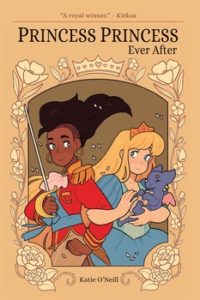 When the heroic princess Amira rescues the kind-hearted princess Sadie from her tower prison, neither expects to find a true friend in the bargain. Yet as they adventure across the kingdom, they discover that they bring out the very best in the other person. They’ll need to join forces and use all the know-how, kindness, and bravery they have in order to defeat their greatest foe yet: a jealous sorceress, who wants to get rid of Sadie once and for all. Join Sadie and Amira, two very different princesses with very different strengths, on their journey to figure out what “happily ever after” really means–and how they can find it with each other.

“Trapped in a tower, ‘big-boned’ Princess Sadie, a white girl with long blonde hair, is tired of fending off unsolicited rescue attempts by princes. But when dapper, dark-skinned Princess Amira and her unicorn arrive, Sadie overcomes the inner fears and self-doubts that had imprisoned her psyche as thoroughly as the tower had her body. The two embark on adventures that include coming to the aid of an embarrassed prince, sweet-talking a sadly misunderstood ogre, and confronting Sadie’s wicked older sister. The princesses’ affection for each other deepens with every challenge—and every round of snappy banter—and when wedding bells ring, they’re for a couple who truly know and have freely chosen one another. O’Neill delivers an alternative fairy tale that challenges conventions with every twist of the plot but doesn’t veer into heavy-handed preachiness that pulls readers out of the story. The bright illustrations, clear layout, and easy-to-read type make this an inviting read.” (Source: Kirkus)

“The book feels as though it aims to reach young readers, giving them a cute story with happy young lesbians; yet some of the language and storytelling feels as though this is the kind of book that will land best with teenagers and older readers. The book does not shy away from addressing what is usually considered mature themes; the narrative directly takes on issues such as sexism and fatphobia. Sadie describes herself as ‘big-boned’ and her sister includes ‘fat’ in many of her tirades against her. Amira’s parents expect her to marry a man when really she wants to go adventuring. These are stories which teenagers can especially relate too as they begin to explore their place in the world. Although, let’s be honest, everyone can relate to the idea of failing parental expectations. I especially loved how the book spotlights Sophie’s kindness and compassion as a strength. The graphic novel also smartly highlights Amira’s fierceness and independence.” (Source: Lambda Literary) 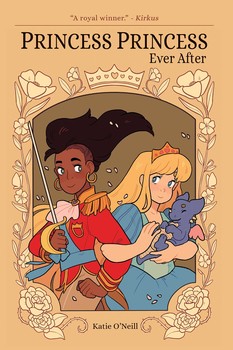 Princess Princess Ever After