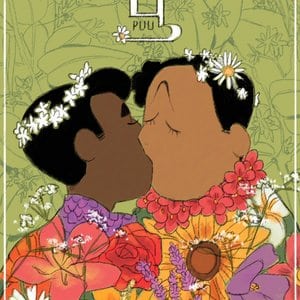 Jameel Mansour moves into a new flat with a strange roommate, Saboor Halwani, who has an obsession for flowers. Slowly, the two men find out that they’re not only perfect as roommates…

This comic is primarily in English, but features words and phrases in Tamil.

““For some, it is the azhaan (the Muslim call to prayer) that speaks to their hearts, for others, it is the suprabhaatam (a Hindu hymn to the deity Venkateswara). To me, the beauty of god can never be summarised with only words,” muses Saboor, the queer, gender fluid protagonist of the webcomic Puu, in a scene where the story flashes back to his teenage years. While stumbling upon this epiphany, he is caressing a butterfly (drawn in vivid colour in an otherwise black-and-white panel), witnessing the miracle of its flight. And through it, he is experiencing an intense spiritual moment – as if being in touch with a harmonious truth beyond the self, beyond simply the domain of faith or rituals (though, in the story, faith is equally important to Saboor).” (Source: In Plainspeak)

Agents of Ishq: “Inside the World of Puu – A Beautiful Comic about Love”

Deccan Chronicle: “An out of the closet comic”