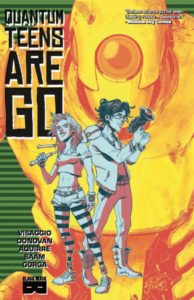 Mad science is the punkest shit there is. Teenage sweethearts Nat & Sumesh spend their nights breaking into abandoned superlabs to steal the parts they need to build a time machine – and they’ve just found the most important part. But mysterious entities keep trying to stop them from turning it on. Now all they’ve gotta do is hang on long enough to figure out why. Magdalene Visaggio (Kim & Kim) and Eryk Donovan (Memetic) bring you a high-octane adventure full of robots, muscle cars, and queer-ass skater punks.

“In the underground world of exxies, people strive to join major superscience teams. Nat and Sumesh, a teen duo struggling just to get the parts for their invention, get one step closer to completing their application project for the infamous Odyssey team in this first issue of Quantum Teens are Go, but at what cost?

“Visaggio’s world is amazing. While many elements ground it in the reality we know far too well, especially the mixed reaction to a transitioned transgender young woman, the fantastical is there within it’s robot punching, tachyon particle experimentation, and rogue bands of stealing inventors. I love the dialogue throughout the issue. Lines like “Break it up, you two! This isn’t a telenovela!” and “Who the hell is this poor man’s Matthew McConaughey” just make me smile. I also love the relationship between Sumesh and Nat. They have a great rapport and a magnetic chemistry.

“Donovan delivers in art. Each character has a subtle element that make them more distinct and unique. From Zero’s arm tattoo to Sumesh’s Star Wars t-shirt, there are these small details that make it feel like Donovan really gave each character attention. It’s not just the characters, either. Backgrounds have these special touches, like the old pictures of “Brandon” on the wall as Nat walks down from her room to the sprinkles of light from Los Angeles in the splash on the first page of the comic.” (Source: Comicosity)

“Mad science may, in fact, be very punk, but it’s also an incredibly dangerous hobby for two teens to navigate on top of missing families, transition, and normal high school homework.

“At the heart of the book are Nat and Sumesh, high school sweethearts with a shared passion making their relationship work in the face of overwhelming personal struggles – Sumesh and his missing family, Natalie and the reaction of others to her transition. The sci-fi narrative that surrounds them may not reach a fully satisfying conclusion, but their love story does all the same, and ultimately the focus on their relationship and the relatability of their struggles is what makes Quantum Teens work. It’s a story of family.” (Source: Newsarama)

“Quantum Teens Are Go isn’t a story about a trans character or even necessarily about transition, but that the reality of who folks thought we were before transition is often inescapable. There’s a moment where Nat walks down the staircase of her old house, and Donovan makes photos of a younger Nat prominent in the frame. Paired with her mother’s lamentations for the changes in Nat’s life, it captures that air of stifling disappointment that can plague a person whose family’s support is anything less than full-throated. It’s a tiny touch that captures a sharp fear that accompanies transition: on top of everything else, the medical and legal struggles, trans panic laws and open bigotry, there will always be people you once considered close prepared to weaponize their memories of you to keep themselves comfortable.” (Source: Paste Magazine)

Comics Alliance: “Punk is About Family: Magdalene Visaggio and Eryk Donovan Build a Better Future with ‘Quantum Teens Are Go’”

1 thought on “Quantum Teens Are Go” 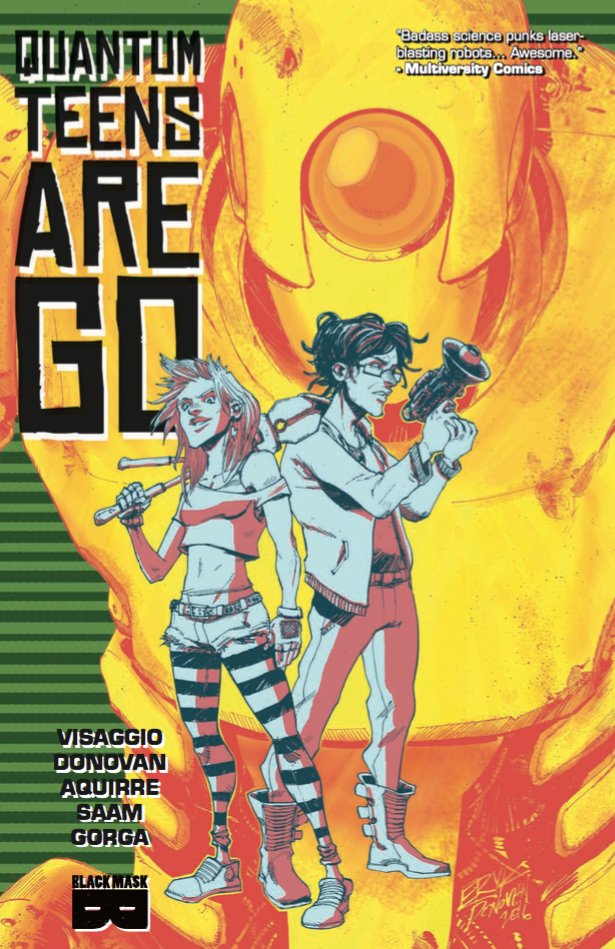