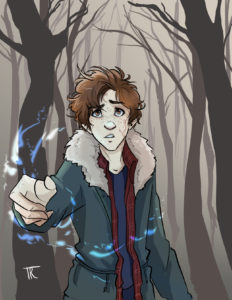 ‘Quinn, dreaming’ is a webcomic that follows 17 year old Charles August Quinn, a Dream Witch from a small Florida beach town.  His senior year is shaping up to be pretty rough; He doesn’t know what he wants to do after high school, he got busted by the principal for selling dreams on campus, he sort of wants to kiss his best friend, and there’s a creepy new girl at his school.  It doesn’t help that the FDA has approved a new drug that ‘cures’ magic, and extremist anti-magic groups are trying to push it on witches they think might need saving.

A brief segment of the comic depicts a magical injury that resembles self-harm injury but is not actually self-inflicted.