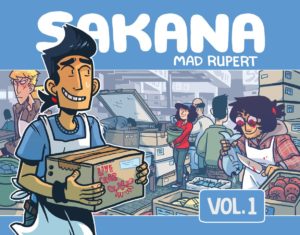 Sakana is a slice-of-life, romantic comedy (a sli-li-rom-com, if you will) that takes place in the Tsukiji Fish Market in Tokyo, Japan. If follows the lives of a few 20-somethings working at the market, their friends and family, and all the wacky situations they constantly find themselves in despite their best efforts. Basically they all want to date each other, but they’re all terrible at it, and also there’s lots of seafood involved.

“Jiro Sakana is a nervous 22 year old working at his uncle’s fish stall in the famous Tsukiji Fish Market. Jiro has finally gotten a date with the cute girl in the stall across from his, but his crippling anxiety threatens to destroy his chances. Not helping are the people closest to him – his well-meaning but scary intimidating older brother Taro, his goofy upbeat roommate Taisei, and his combative coworker Yuudai.

Reading Sakana is watching a bunch of over-reactors bounce off each other and struggle through life. It’s very madcap without ever breaking reality. There are many appreciable dumb puns, for example, ‘Sakana’ means fish in Japanese, so the Sakana Fish Stall is actually the Fish Fish Store. If you find that joke as delightful as I, this might be the comic for you.   The characters are all very endearing, and it’s easy to root for the cripplingly stressed Jiro. We root for the characters in part because they struggle so much to do anything. Even Yuudai, who is a jerk to everyone, is sympathetic because the reader sees how hard accomplishing anything is. There is a drama element to Sakana. Rupert reveals more complexity and conflict into the Sakana family, such as Jiro and Taro’s deceased parents, and their Yakuza entangled cousin. While the central story is about Jiro and his crush, more conflicts keep being introduced. These developing arcs are engaging and I’m excited to see how they blow up later. Because anything that can blow up, will blow up.” (Source: The Beat)

“Sakana is about the lives of a group of people working at the Tsukiji Fish Market in Tokyo. The main character, Jiro Sakana, is a fish salesman who manages to work up the courage to ask the beautiful and enigmatic Chie, who works at the stall across from him, on a date (despite his fear of the opposite sex). Meanwhile, Jiro’s protective older brother, best friend, and hated coworker decides to tag along to his first date in secret.

It is Rupert’s characters that truly make the comic shine. Each one is uniquely lovable and relatable, and the character development, though it happens through exaggerated situations and shenanigans, feels natural in context. Though there is some very good slapstick in the comic, the biggest source of humor comes from the character’s interactions with each other, as well as the expressions that fit very well with Rupert’s style of drawing faces.” (Source: Emertainment Monthly) 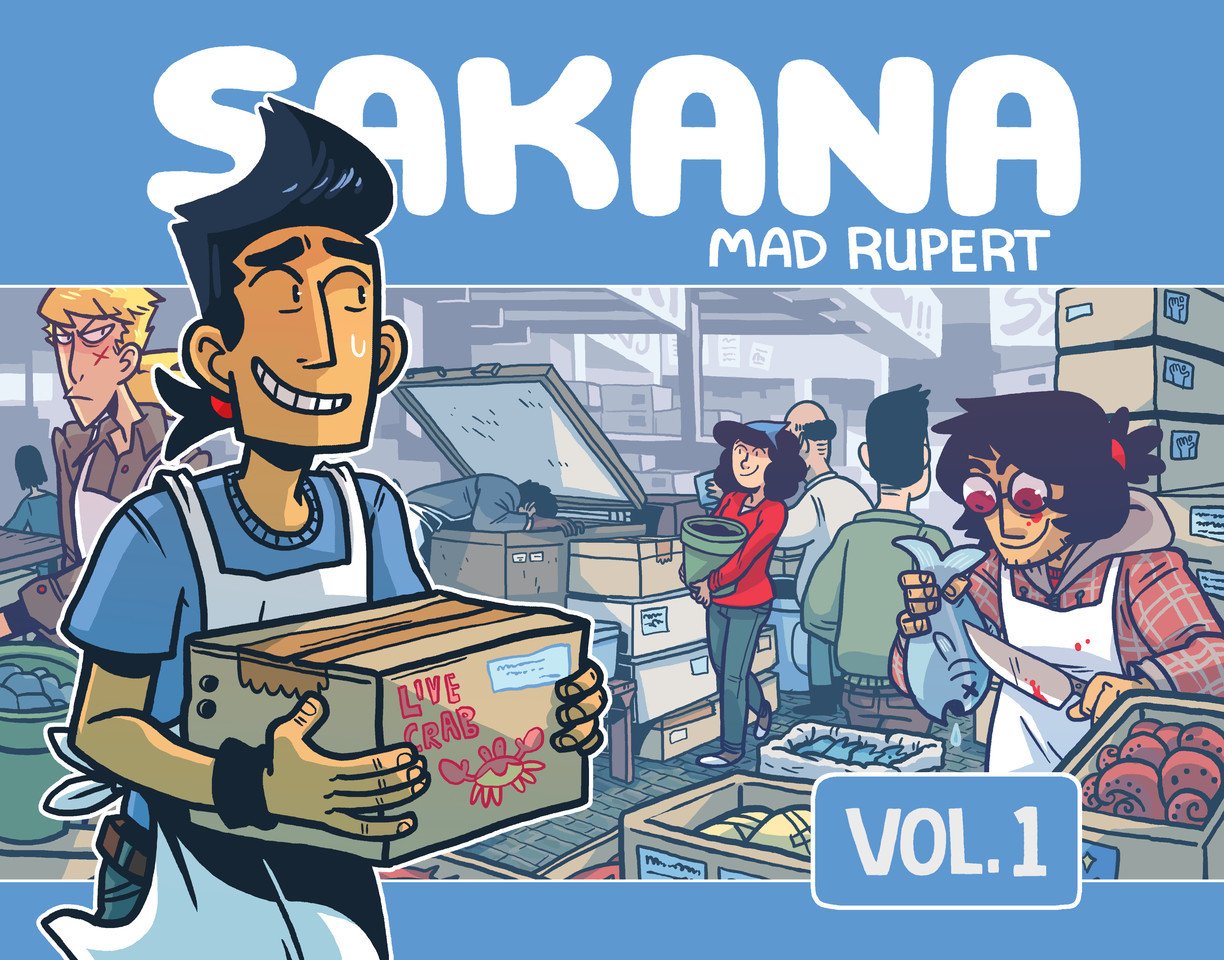 Our heroes must wrangle unruly seafood and navigate a hazardous dating scene in order to find love, peace of mind, and a paycheck.
From: Hiveworks 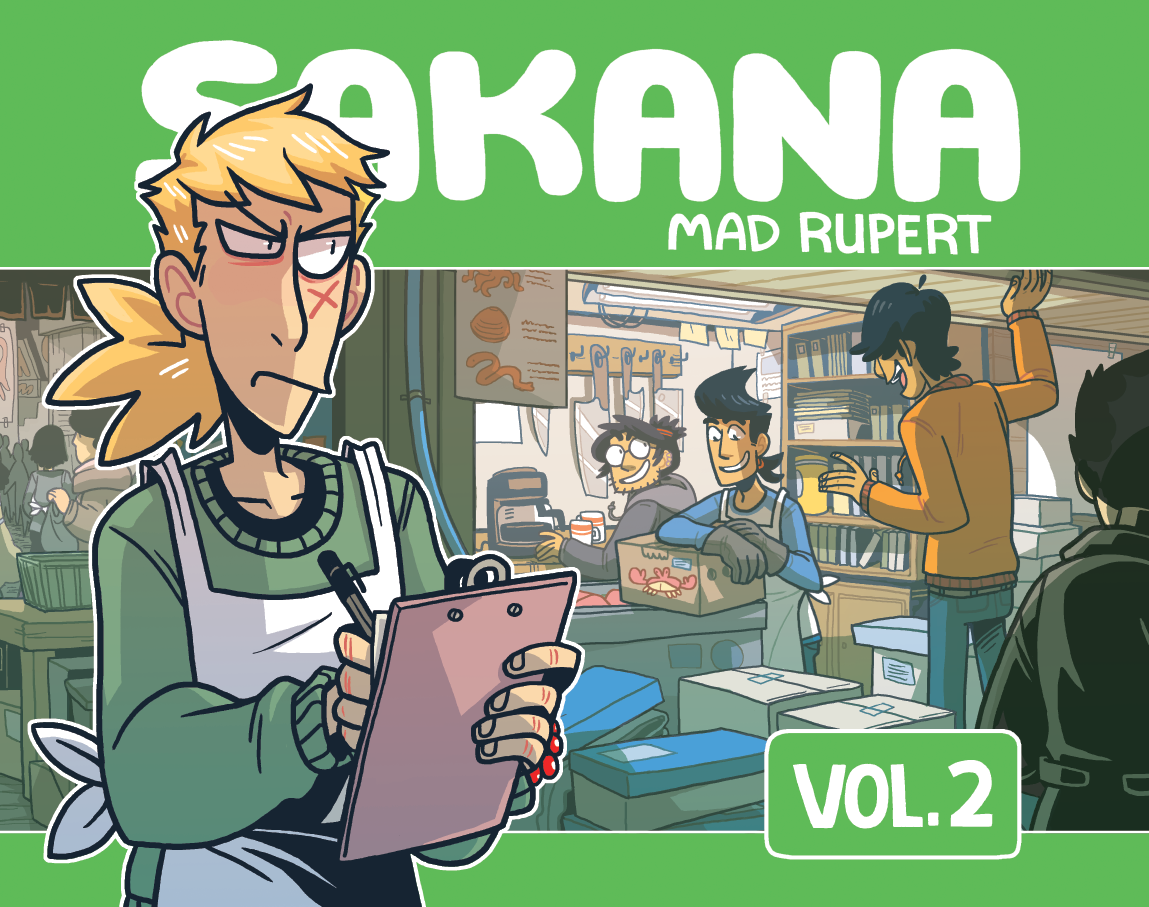 Following the events of Volume 1, the Sakana brothers, their roommate Taisei, and their abrasive manager Yuudai wake up after a night of drinking to discover a host of new problems have developed overnight. An unfortunate texting mishap lands Yuudai in the hotseat with a persistent ex. Jiro has to mentally prepare for a second date. And the two of them, traditionally enemies, must work together to solve their problems (or at least find a good place to hide until everything hopefully blows over.)