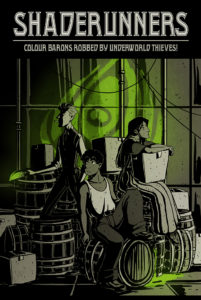 A thousand years ago, the last colour in the world faded to grey. Now, after the great archaeological discovery of Queen Sorizahana’s shade-stocked tomb, it stands ready to enter the world again. Ironwell City will become the birthplace of the burgeoning colour industry, where colour is pumped out of factories, poured into perfumed bottles and sold at exorbitant prices to those wealthy enough to afford the luxury.

At least, that’s the plan according to the Five Financiers of the Sorizahana excavation.

One part Prohibition fantasy, one part Robin Hood, and a whole lot of epic heist, Shaderunners follows a group of ragtag bootleggers and bohemians who band together in an effort to steal colour from the wealthy echelons of Ironwell’s high society. Among them: a philosopher, a puppeteer, a gutter rat, an opera singer, a naval officer and a hopeless romantic. Together, they run The Glass Dial, former watch shop and future night club, where all the house drinks run red.

Speak easy, pal, ‘cause the road to ruin is paved with good intentions

This series takes place in a fictional setting where gender, sexuality, and romantic norms differ from the real world. For example, polyamory appears to be a common practice.

The focal character of the series is a bisexual male character who has emigrated from another place within this fictional setting. Although elements of his story parallel portrayals of racial minorities, he is not coded as any specific real world ethnicity.

A major supporting character presents alternately as masculine and feminine.

“Over the last few days I’ve loved reading Shaderunners, a webcomic set in a 1920s world where color is almost entirely absent. The only returning reserves of color are found in a tomb in Egypt, leading the world to set up color bootlegging factories across the biggest cities, so that greens and yellows now belong solely to the rich. Into this world stumbles Domigo Valdes, a young man who wants to impress a nice girl with tickets to a big show. In order to get those tickets, however, he quickly finds himself drawn into an underground racket that threatens everything he knew before.

With a story written by “Lin” and drawn by “Capp”, this is an absolutely lovely piece of work — casually paced, but with a wealth of wonderful character work. And as you might expect, the coloring on the series is just spellbinding. It’s a really good comic.” (Source: ComicsAlliance)