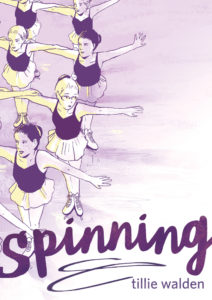 Ignatz Award winner Tillie Walden’s powerful graphic memoir Spinning captures what it’s like to come of age, come out, and come to terms with leaving behind everything you used to know.

It was the same every morning. Wake up, grab the ice skates, and head to the rink while the world was still dark.

Weekends were spent in glitter and tights at competitions. Perform. Smile. And do it again.

She was good. She won. And she hated it.

For ten years, figure skating was Tillie Walden’s life. She woke before dawn for morning lessons, went straight to group practice after school, and spent weekends competing at ice rinks across the state. Skating was a central piece of her identity, her safe haven from the stress of school, bullies, and family. But as she switched schools, got into art, and fell in love with her first girlfriend, she began to question how the close-minded world of figure skating fit in with the rest of her life, and whether all the work was worth it given the reality: that she, and her friends on the team, were nowhere close to Olympic hopefuls. The more Tillie thought about it, the more Tillie realized she’d outgrown her passion—and she finally needed to find her own voice.

Starred review: “Award-winning Walden’s first book-length work traces her childhood spent in the competitive figure-skating world, and although most of her memoir happens in skating rinks or at competitions, that element ultimately becomes the backdrop for a deeper story about her coming out and coming-of-age. In delicate, evocative artwork, rendered exclusively in purple with yellow highlights, Walden relates the struggles of moving to a new city in middle school, dealing with a particularly cruel bully, feeling scared to be open about her homosexuality, and so on, all while gradually becoming disillusioned with skating. She uses negative space to great effect, elegantly depicting her loneliness and isolation while simultaneously emphasizing how deeply she feels unable to speak up for herself. Subtle hints of her burgeoning interest in art, depicted in small, fine-lined doodles encroaching on the edges of panels and pages, are a tantalizing glimpse into what readers know she’ll become. All these feelings play out compellingly on the ice, and chapter-heading descriptions of skating moves seem to hint at Walden’s larger emotional development. The overall effect is quiet and lyrical—there aren’t many huge epiphanies, and conflicts disappear rather quickly—but Walden’s cumulative growth and courage to speak up for what she actually wants are unmistakable and deeply satisfying. A stirring, gorgeously illustrated story of finding the strength to follow one’s own path.” (Source: Booklist)

Starred review: “Graphic novelist Walden recounts her years coming-of-age as a competitive ice skater. Tillie Walden knew she was gay since she was 5, which was also when she began ice skating. This memoir recounts the years from when she’s 11 to when she reaches her late teens, as her life marches on through fledgling romances, moving halfway across the country, bullying, and various traumas with skating as her only constant. Her story is largely insular, with her family only visible in the periphery, even with regard to her skating. Walden’s recollections tend to meander at times, with an almost stream-of-consciousness feel about them; her taciturn introspection mixed with adolescent ennui creates a subdued, yet graceful tone. For a young author (Walden is in her early 20s), she is remarkably adept at identifying the seminal moments of her life and evincing their impacts on her trajectory. Her two-toned art is lovely and spare, utilizing the occasional splash of an accenting color to heighten visual interest. She draws herself as a blonde, bespectacled, white girl, a depiction that brings Harriet Welsch to mind. Walden deems herself ‘a creator who is happy making a book without all the answers,’ and while she may not solve any of life’s great conundrums, her offering is intimate and compelling. A quiet powerhouse of a memoir. (Graphic memoir. 13-adult)” (Source: Kirkus Reviews)

Starred review: “In an elegant, contemplative, and somber graphic memoir, Walden (The End of Summer) immerses readers in an adolescence dominated by competitive figure skating. The story stretches over several years, during which time Walden vacillates between embracing the routine of early morning practices and the rush of competition, and a near-constant feeling of otherness, due in large part to her attraction to girls, which she hides from her family and peers. ‘It wasn’t the thrill or freedom I felt that I remember,’ she notes after making a romantic connection with a friend. ‘It was the fear.’ Chapters open with illustrations of spins and jumps, the movements delicately mapped, paired with commentary that, at times, gives insight into Walden’s personal life; of the frustrating axel, she writes, ‘As I would turn to go into it I would wish and hope with everything I had that this time it would work.’ A palette of deep purple, splashed with yellow, underscores the loneliness that permeates Walden’s story, and her careful attention to facial expressions and body language makes readers intimately aware of what she is feeling. A haunting and resonant coming-of-age story. Ages 14–up.” (Source: Publishers Weekly) 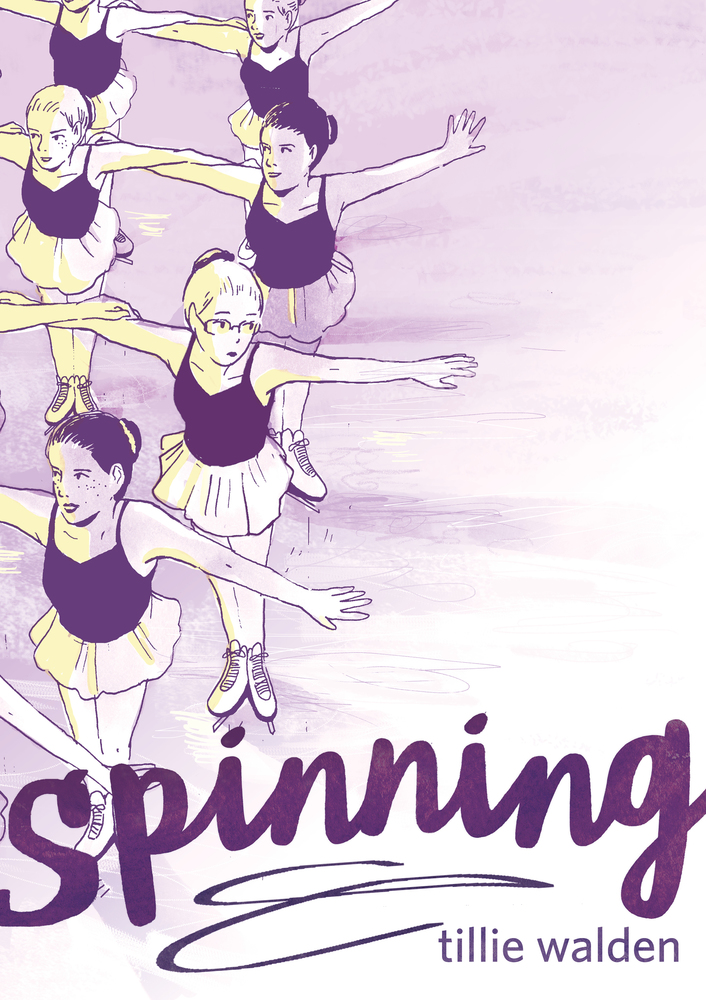