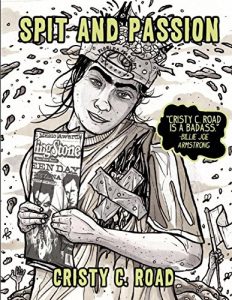 At twelve years old, Cristy C. Road is trying to balance the values of a Cuban Catholic family with her newfound queer identity, and begins a chronic obsession with the punk band Green Day. In this stunning graphic memoir, Road renders the clash between her rich inner world of fantasy and the numbing suburban conformity she is surrounded by. She finds solace in the closet—where she lets her deep excitement about punk rock foment and, in that angst and euphoria, finds a path to self-acceptance.

This is a memoir focusing on the author at twelve years old.

“Not all LGBT coming of age tales are tales of coming out. Punk raconteur, musician and artist Cristy C. Road’s latest graphic memoir is instead a tale of the closet, and how the band Green Day saved her tween, queer soul.  This is a very thorough tour of that small space, where as a young lesbian, Road struggled to find her queer identity. Outside of her closet, the beliefs of her family, school and American culture denied her queerness, striving to keep that closet door shut tight.  For many of us, memories of our twelve-year-old crushes (c’mon, ‘fess up, who of you liked the Monkees? Boyz II Men? New Kids on the Block? Justin Bieber?) are dalliances we don’t ever want to see on Facebook, or write about ourselves. Then again, twelve-year-olds aren’t known for their musical taste, and the bands we first love are often more about the visionary doors they open for us, than who they really are. Road was lucky that the band she fell for had enough integrity that their songs rescued her, gave her a nom de plume she that keeps to this day, and featured a lead singer, Billy Joe Armstrong, who is now her fan.” (Source: Lambda Literary)

“Veteran punk writer and illustrator Road weaves text and art together in a charming and angst-ridden coming-of-age story. Cuban-American and raised in a traditional Catholic family, the preteen Road has a number of identity issues: she does not fit into her cultural mold, she finds salvation in punk rock, and she has a conflicted gender identity. Embracing her tomboy nature, Road begins to come to terms with herself as a gay woman, building a closet for her secret that becomes her refuge. Road’s identification with her teenage self feels genuine, and her recollections of pop culture (both embraced and rejected) of the 1990s will strike nostalgic chords in readers of that generation. Road balances long sections of prose with pages dominated by art; her pencil and marker style, with images populated by strange and imperfect-looking characters, is well suited to her story, even if the ending doesn’t entirely solve her identity issues. Grotesque images of dangling eyeballs and gushing brains reflect the alternative scene the young Road has discovered. Readers who enjoyed Alison Bechdel’s Fun Home will probably empathize with Road’s story of sexual exploration and punk rock.” (Source: Publishers Weekly) 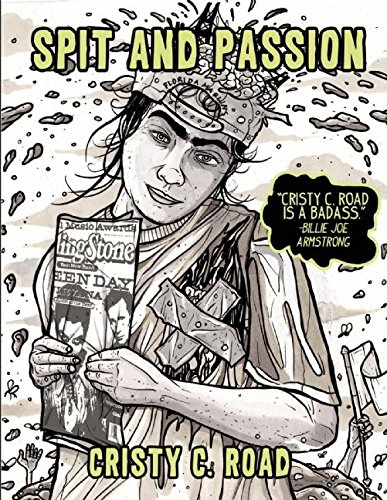