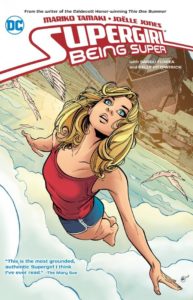 Kara Danvers isn’t any different than any other teenager in her hometown. Problems with school. Problems with boys. Problems with friends. But while growing pains shake up Kara’s world, a series of earth-shaking events hits her hometown, leaving her with with the choice of blending in with the crowd or being different. Being an outcast. Being super. This reimagining of Supergirl will appeal to fans of all ages and readers new and old, as the Girl of Steel flies face-first into the struggles that every teenager faces.

Starred review: “A lot of this origin story will sound familiar to anyone who knows about Superman, but Tamaki breathes new life into the story with her pitch-perfect ear for teen dialogue and keen focus on building well-rounded, vibrant characters. Kara’s friendship with track teammates Dolly and Jen is the emotional core of the story, and when tragedy strikes during a freak earthquake at a track meet, it’s a heartbreaking, believable spark for Kara’s incipient heroic ambitions. Jones’ fantastic artwork nods at iconic Superman imagery, but her style is much more naturalistic. Her figures are refreshingly varied in body shape and skin tone, and she renders the athletic teen girls with undeniable strength but not a hint of the oversexualization that’s so pervasive in superhero comics. Dynamic splash pages, varied panel layouts, cinematic action, and dense, lush colors are icing on an already delicious cake. Even teens who don’t typically go for caped crusaders might find something to like here. Among the massive field of superhero comics, this one is an impressive standout.” (Source: Booklist, vol 114, number 18, p36)

“Superpowers are sidelined by the drama of fitting in, keeping secrets, and dealing with grief. Of her small circle of friends, the brown-skinned lesbian Dolly has enough sass to power Kara through everyday interactions as well as the weightier theme of the death of a loved one. More ‘teen drama’ than ‘super,’ this is an interesting choice for those looking for more than the usual hero fare.” (Source: Kirkus Reviews, April 15, 2018)

“In this reboot of Supergirl , Kara, cousin of Superman, lives a normal high school life with her best friends, sporty Jennifer and purple-haired, girl-crazy Dolly. After Kara fails to save Jennifer from dying in an earthquake, she challenges her adoptive father’s insistence that she hide her superpowers. Tan-on, another survivor of Krypton, offers her a connection to her past, but he also seeks revenge upon those who harm Kryptonians. Kara will have to decide what kind of person she wants to become and which moral lines she should cross. Tamaki and Jones have created a fun and sincere version of Supergirl  whose relationships are realistic and poignant and who will attract a broad audience. Kara grows as a character as she faces increasingly complex and harrowing circumstances. This first volume gives direction to the protagonist, unpacks her origin story, and pulls her into the larger DC universe, all while delivering a grounded tale that shows Kara as both a person and a hero. Ages 10–up.” (Source: Publishers Weekly, vol 265, issue 27)

“Writer Mariko Tamaki and artist Joëlle Jones take on the Maid of Might with a sensitivity and wryness that makes their take on her origin story one of the strongest entries in the character’s history. This is a book that glories in quotidian detail — one of the most memorable sequences is of Kara and a friend reminiscing over diner food — because, crucially, this is a book that understands how vivid that sort of minutiae is to a teenager. Though the chasm between Kara’s normal life and her not-so-normal powers yawns ever wider over the course of four issues, Tamaki and Jones never forget that she is still a kid with chores, school, and friends to text. It is, to risk a cheesy joke, a wonderfully down-to-earth tale of the girl inside the super.” (Source: The Verge)

The Mary Sue: “Mariko Tamaki and Joëlle Jones Focus More On the ‘Girl’ and Less On the ‘Super’ In Supergirl: Being Super” 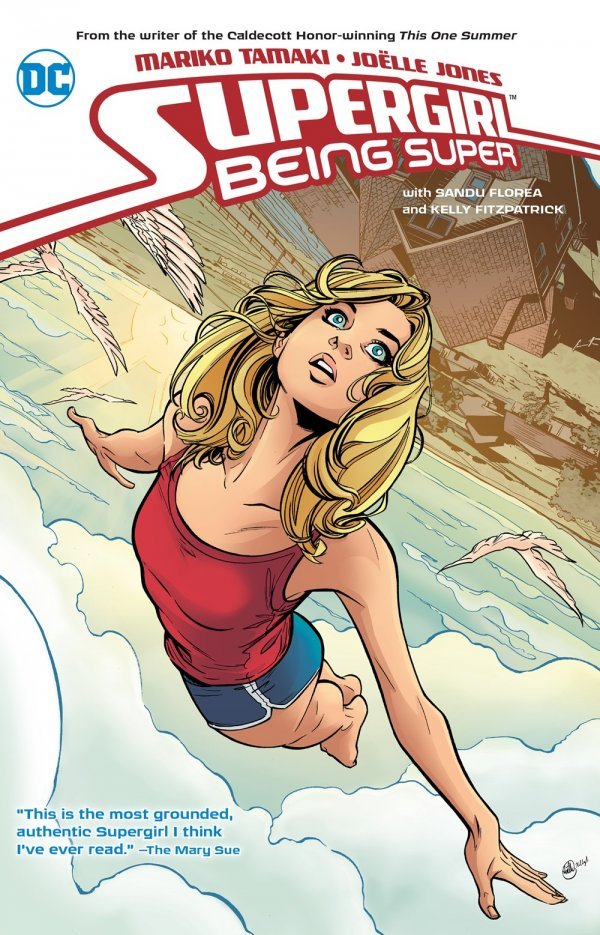